By: Carrie Johansen
In: Campus, Community, News
With: 1 Comment 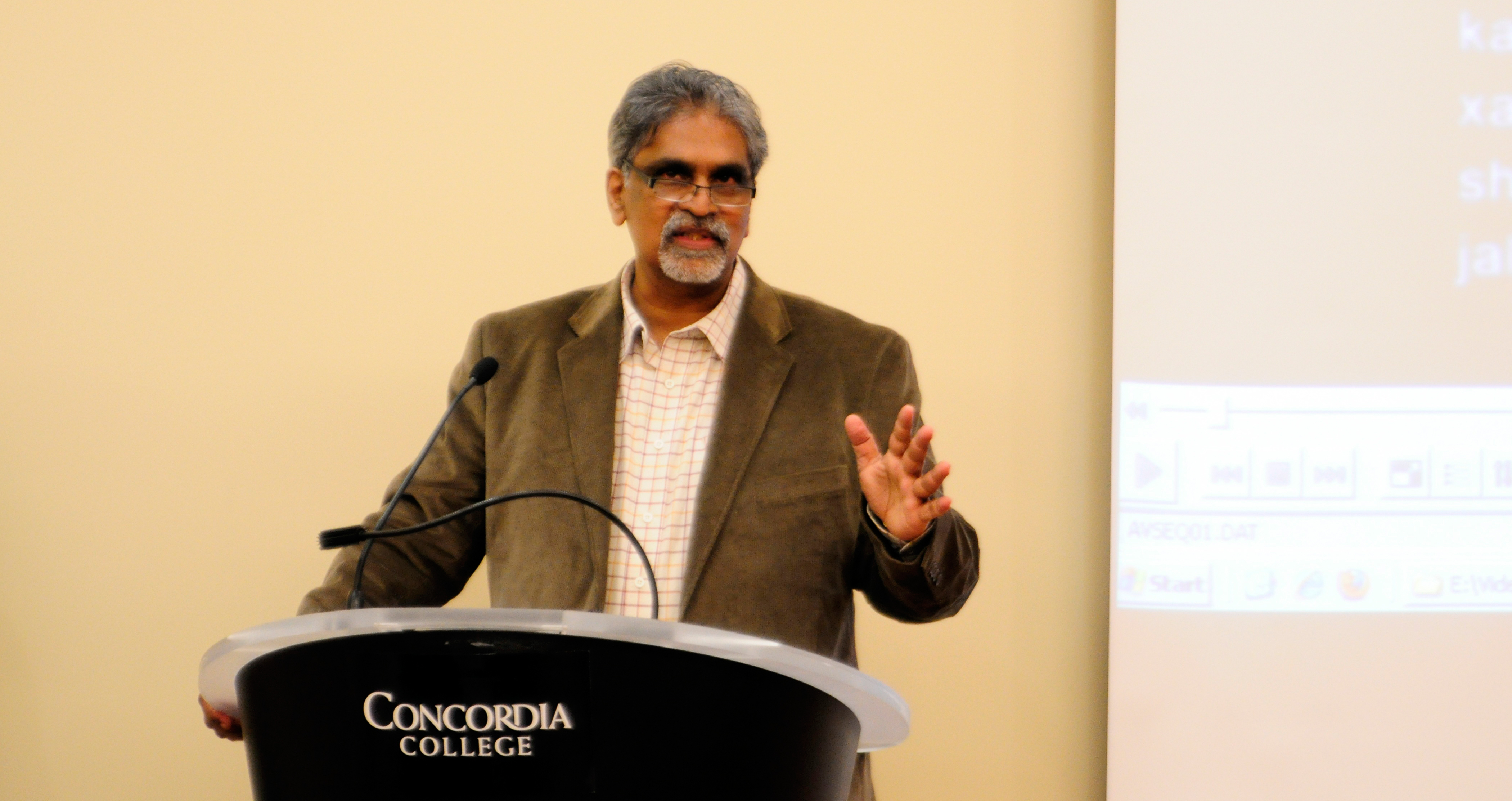 David Selvaraj, the founder and director of an institute for development and peace studies and action in southern India called Visthar, will spend the next four months at Concordia as a scholar-in-residence, even though Concordia does not have a standing scholar-in-residence program. Selvaraj was welcomed to Concordia at a reception on Monday, Jan. 24.

“It’s great to be here,” Selvaraj said. “I look forward to catching up with [students who studied in India] and other friends and colleagues.”

“He is exactly the kind of person we want,” Foster said, “because he combines that ‘being responsibly engaged in the world’ with a great deal of knowledge that he has acquired.”

Visthar is a non-governmental organization in Bangalore, India, that is “committed to enabling women, children and other marginalized sections realize their rights,” according to Visthar’s Web site. The organization rehabilitates children at risk, and trains activists, organizations and students to work towards a just society, according to the Web site.

Visthar is unlike typical American non-profit organizations in that it has a campus, not just an office. The campus includes housing, areas for meditation, a dining hall designed to facilitate discussion and interaction, conference rooms, and much else. The six-acre campus is used for a variety of things, including a residential school for girls, hosting conferences, workshops, seminars and outdoor trainings, and hosting students from abroad through the “Social Justice, Peace and Development: A Semester in India” program, according to the Web site.

“[It has] a complete focus on justice and peace,” Selvaraj said. “Not just looking at the philosophical aspects of justice and peace, but how does it get played out in the real issues—food security [and] not just climate change, but climate justice.”

The program is a partnership between Gustavus Adolphus College, Concordia College and Visthar that takes about eight students from each school to the Visthar campus each fall semester.

Organizing the students on the Minnesotan end rotates between colleges, and Jonathan Steinwand, chair of the English department, led trips in 2008 and 2010. Steinwand wanted to learn more about the program when he met students who had been a part of it.

“Students were not only transformed, which happens with a lot of people who study abroad,” Steinwand said, “but they were so transformed by their experience that they were transforming their friends, their roommates, and people in class.”

The different culture and the focus on grassroots and listening to the poor are strengths of the program that distinguish it from other semesters abroad, Steinwand said.

Concordia does not have a scholar-in-residence program, but the concept of a scholar living within a community is that the scholar would become a part of that community, Foster said.

Selvaraj wasted no time in beginning that discussion, and he spoke of the relationship between India and the United States at the reception. India is following in the path of the United States for better or for worse, he said.

Selvaraj is not a scholar who conducts his research and releases findings. Instead, his research is a part of his life.

“He is a bridge person between the academic and the practice sides of things,” Steinwand said.

Selvaraj’s oldest son, Siddarth, attended Gustavus, and his youngest son, Sudhir, is a senior at Concordia.

“I think it’s a great opportunity for the college and for my dad to mutually learn from each other… to grow and develop,” Sudhir said. “It’s a fantastic thing for students on this campus to get a chance to talk to someone who’s been in the field for a long time.”

Concordia received a grant to enhance Asian studies from the U.S. Department of Education, and some of the cost of Selvaraj’s stay will be covered by money from the grant, Foster said. Selvaraj will stay on campus in a Bogstad apartment, Foster said. His wife will be on campus for one month as well, Sudhir said.

“It doesn’t cost a lot to have him come over and be here,” Foster said, “and he can add so much. It’s hard to find people like him.”

Kyle Meerkins, a senior, spent the 2010 fall semester in India. At the reception, he read from a blog he posted after arriving in India.

“Somehow, despite the unfamiliar and the unknown that surrounded us,” Meerkins said, “we were home.”

Concordia now has an opportunity to extend the same hospitality to Selvaraj, Meerkins said. Just as Concordia students found a home at Vishtar, Meerkins hopes Selvaraj will find a home at Concordia.

As is tradition, every new Cobber gets a beanie. Meerkins welcomed Selvaraj to the community and gave him a golden beanie, and Selvaraj immediately put it on.