From Minnesota to Haiti

By: Kate Campbell
In: Campus, Featured, News
With: 0 Comments 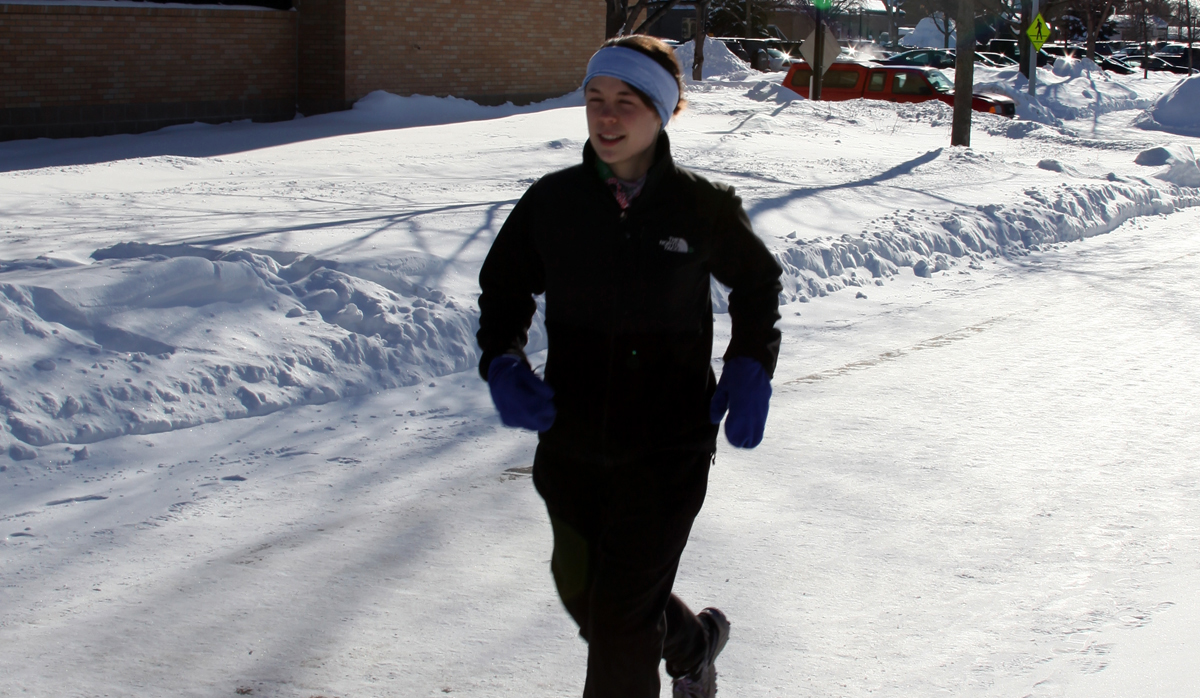 Tomorrow morning, Sarah Kjorlien will bundle up to face the frigid temperatures in Moorhead and run three miles. Halfway around the world in the much warmer Czech Republic, her sister is also running three miles. Coincidence? Not so much. This routine has been going on for almost eight months.

Two thousand one hundred eighty three miles. That’s the distance from Minnesota to Haiti. It’s also the distance that the two sisters will run this year for their fundraising project Run to Rebuild Haiti.

The plan is simple: each sister runs three miles a day, every day, from June 1, 2010 to June 1, 2011, adding up to the grand total of 2,183 miles. Friends and family can choose to sponsor the sisters for one day, for three dollars each, and all the money collected is sent to Lutheran World Relief.

Sarah Kjorlien credits her World Issues course, taught by Peter Hovde last spring in the Political Science department, with inspiring her for the idea. After the semester was over, Sarah wasn’t ready to give up. So, she added her passion for running to her newfound passion for Haiti, and created “Run to Rebuild Haiti.”

Despite the fact that it has been over a year since the 7.0 magnitude earthquake struck Haiti, the country still needs aid. According to a Jan. 11 news article in the New York Times, “more than a million displaced people still live under tents and tarpaulins.” Add this to a recent outbreak of cholera, and it becomes clear that Haiti is still in desperate need of help.

Connie Peterson, a professor in the Nursing department at Concordia, went to Haiti last year and has had first-hand experience with the devastation present in the country. She explained that cholera is spread by unclean water, and this is essentially the only type of water available to most people.

“Lots of times after a disaster happens there’s a really big rush of donations,” said Sarah. “But they dry out after a while. Our idea is to keep it going.”

“Even though millions of dollars have been pledged in foreign aid, only a small fraction has trickled down to the people,” said Peterson.

Her younger sister, Kelly, graduated from high school last year and is currently taking a year off before beginning college to train as a biathlete in the Czech Republic.

“Six miles a day for one person sounded a bit tough, especially with how busy Sarah is,” said Kelly. “So I offered to help. Since I wouldn’t be going to school I figured I would have time to help with the logistics and I would be able to count my training for my miles.”

“I’m sure if she tracked every mile she runs, she’d be to Haiti and back already,” said Sarah with a laugh.

Sarah admits that some days it’s hard to convince herself to go out running, especially with the frigid cold weather that’s plagued the area recently. But she just tells herself that she never regrets going for a run; she’ll only regret not going.

“Tons of people in Haiti are victims of really drastic injuries,” she said. “When you put that into context it makes what you’re doing so much easier than what they’re going through.”
Sarah said out of everything, what has surprised her most are the donations that have come in from her community.

“When you start out a project you think, is this going to work at all? Is this a crazy idea? I’m just really grateful for the response we’ve had,” she said.

“I’ve been surprised about how easy it is to find people that are excited and willing to be involved,” she said. “Most of the people we have approached have been very supportive and interested in helping out in any way they can.”

When the year of running is finished, Sarah isn’t entirely sure what she is going to do. Her friend suggested that she and her sister “run back.” She’s also considering starting a 5k run in her hometown of Grand Rapids, Minn.

Sarah said that there are many ways interested Concordia students can get involved.
Students can buy a t-shirt from Old Lutheran that says “From Minnesota to Haiti: Haiti Can Recover. We Can Help” for $12. The sisters also still need sponsors for many days through the next few months. Sponsorship is only $3 for one runner, or $6 for both. For more information, students can check out their Facebook page, “Run to Rebuild Haiti,” or contact Sarah Kjorlien directly.

Amy Evans, a freshman at Concordia, went to high school with the sisters and is one of their sponsors. She said that she chose to help with the fundraiser because she appreciates that they are continuing to help Haiti when so many others have stopped.

“I loved the idea,” she said. “I thought it was a great way for [them] to help others and to do something that means more than just going for a run to stay in shape.”

Peterson said that it’s important for Concordia students to get involved with projects like this not only because it’s a part of the mission statement of the college, but because it’s part of what God calls us to do.

“We cannot do everything, but we can and should do what we are capable of doing,” said Peterson. “I believe that we are called to be God’s hands in the world and that is what we should be doing.”

Throughout all of this, Sarah refuses to be anything but humble.

“I’m not really doing anything,” she said. “They’re the ones giving the money and I’m just sending it somewhere.”