By: Christina Kirchner
In: Featured, Variety
With: 0 Comments 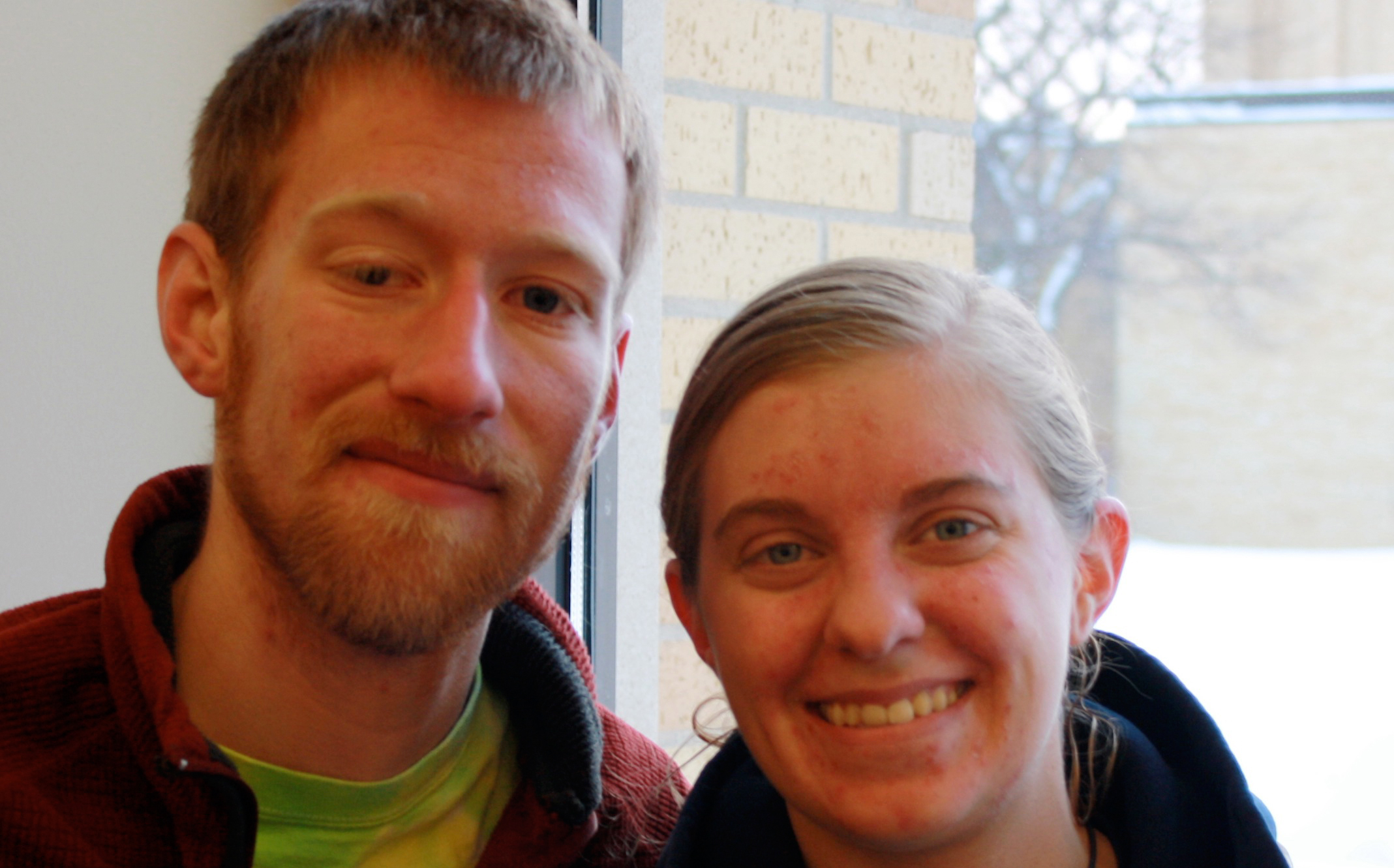 Andrew Wiens, a senior, and Brie Petrich, a 2010 alumna, have been described as “The Parents,” “The Grandparents,” and “The Old Couple” by their friends and those the couple have hosted.

Wiens and Petrich act older than they are: taking care of those who do not outwardly ask for help, looking at the whole situation and having a lot of faith.

Married in June 2010, Wiens and Petrich are using their talent for caring by living and working as resident managers at the Ronald McDonald House in Fargo.

With two locations in the Fargo-Moorhead area, the Ronald McDonald House offers temporary housing to family members of ill children who are receiving medical treatment at a nearby hospital.

The job description of resident managers is much like for the Resident Assistants of Concordia College: looking after the residents on their floor and providing assistance wherever needed.

For three nights a week, from 7 p.m. until 9 a.m., Wiens and Petrich are on call at the house on University Avenue in Fargo. If, for whatever reason, a family needs a place to stay in the event of an emergency, Wiens and Petrich prepare their room, completing intakes of who will be staying and making sure each family comes into a clean and welcoming environment.

“But we mostly talk with the families,” Wiens said. “We are an ear for them.”

Wiens recalled a woman who stayed at the house for five months after she gave birth to her son in a toilet. Before she gave birth, she went to the hospital because she felt there was something wrong with her pregnancy. When she went to the bathroom, she came back holding a palm-sized baby boy.

“The doctors took the baby and were able to open his lungs,” Wiens said. “Five months later, she was able to take her baby home.”

However, some of the stories they encounter appear as if no happy ending is in sight.
Wiens and Petrich met and spoke with a family who had a five-year-old daughter who was receiving chemotherapy treatments on a daily basis for cancer.

Petrich shook her head and briefly thought about the family’s experience.

“It is hard for us too. I mean, I cannot explain what it is like for them,” she said. “We can sympathize, but we cannot empathize what they are going through.”

The consideration and support that Wiens and Petrich offer to the families at the Ronald McDonald house is reflected by the care they have for one another.

Wiens asked Petrich to marry him on July 2, 2009, the only day Wiens had off from his work at summer camp.

Petrich was given a scavenger hunt list that led her all over Wiens’ house and into his hometown of Billings, Mont.

The last stretch of the scavenger hunt was in a Frisbee golf park where Petrich had free climbed one of the rocks there for the first time during a previous visit to Montana.
She climbed to the top of the rock for the scavenger hunt, but it was difficult because there were not foot holes for support.

“I kept trying and I couldn’t get up, so I decided that I would try one more time then I would just fall,” she said.

Just as she braced her arms on top of the rock one last time, she felt someone’s hands under her feet and push her toward the top.

She stood up on the rock and saw that it was Wiens who had helped her.

“I was shaking and crying and he was saying things to me, I can’t remember what he said exactly,” she said, glancing toward Wiens who was sitting next to her. “But he said something along the lines of ‘Will you be my wife?’”

Less than a year later on June 19, 2010, Wiens and Petrich were married in Red Lodge, Montana.

While Petrich graduated from Concordia in May 2010 with a degree in religion and a minor in Spanish, Wiens, majoring in religion with a minor in German, still had a year left to complete. They began to look for places to live for the following academic year when Heidi Rogers, the hall director of Hallet, mentioned that they could apply to be resident managers at the Ronald McDonald house.

The experience at the House has been enlightening for both Wiens and Petrich, they said.

Time management is a discipline the couple have learned from living at the House, they said. Wiens is a full-time student, youth minister at Faith Lutheran Church and works at Erbert and Gerbert’s on Broadway in Fargo, while Petrich works at an assisted living facility and is a youth minister at Peace Lutheran Church, but they are able to use the love they have for each other and enable it to assist others, they said.

“We are not wrapped up in our marriage,” Petrich said. “We are focusing on loving outside ourselves.”

Having all these jobs requires a lot of patience, commitment and discipline, Wiens said, as does working through a relationship.

“Our relationship is one where we push each other, looking at things in different ways,” he said. “We don’t use our marriage as a means to an end. We aren’t saying ‘OK, now that we’re married, we are going to get comfortable.’ We passionately seek purpose.”
They also seek adventure in and outside themselves, Petrich added.

Once Wiens graduates in May, the couple’s time at the Ronald McDonald House will end, and they will go out and seek their next adventure.

Only knowing that they both want to be disciples of Christ, Wiens and Petrich said they are unsure of what they hope to become.

“We are still learning and growing with each other and ourselves,” Petrich said.

They have talked about doing mission work in South America or overseas, but for now, they are planning on spending a couple months after graduation backpacking across the United States and visiting family. After that, their lives will be in the hands of someone more powerful, Wiens said.

“We’ll go where we are called,” he said.