Men of East Dance Into Spotlight

By: Sallie Steiner
In: Campus, News
With: 0 Comments 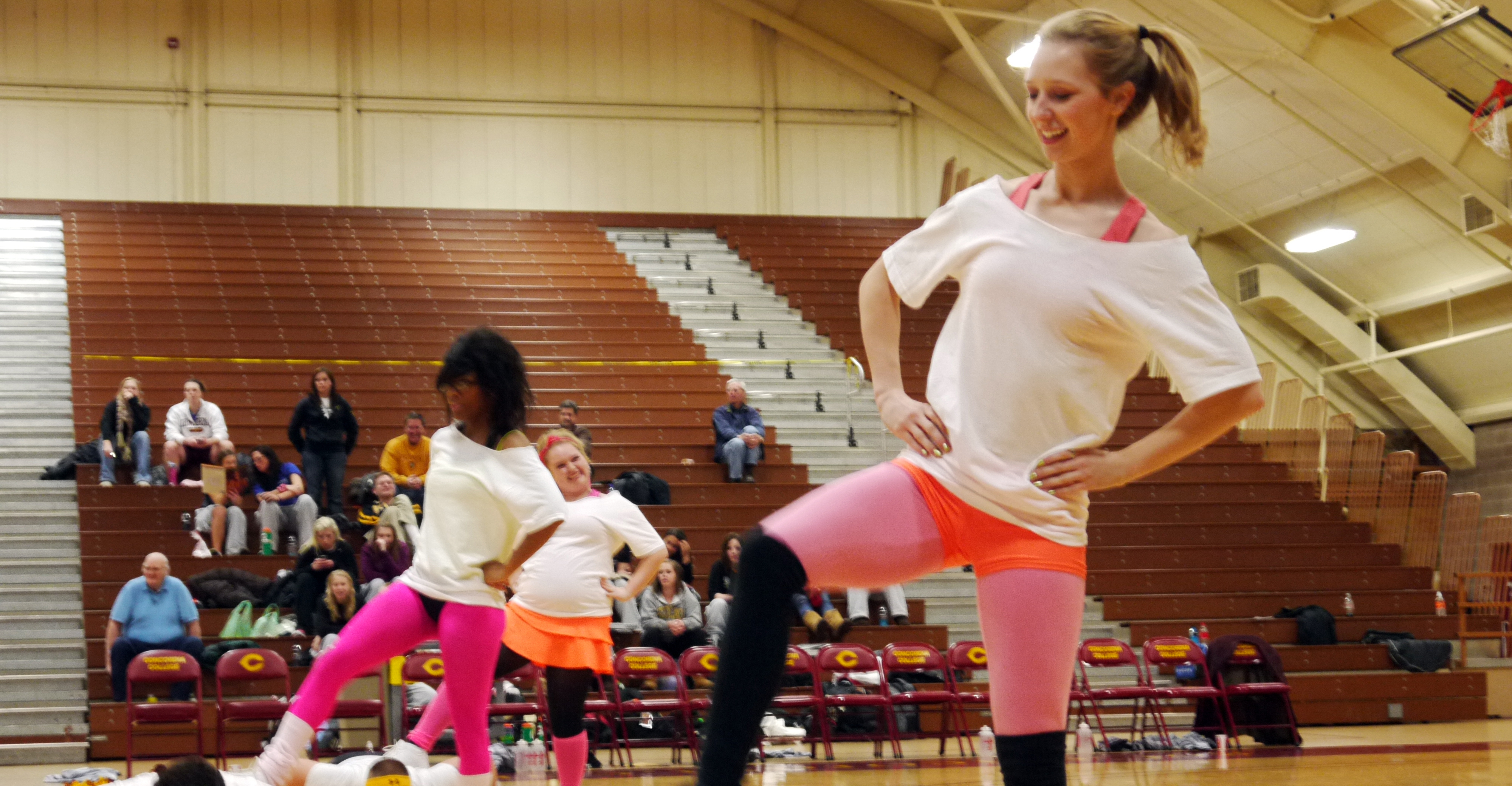 The first half of the Cobber-Ole basketball game is coming to a close as the players rush off the court and head for the locker rooms. Taking their place is the half-time entertainment: the Cobber Dance Team accompanied by their special guests, the Men of East. The group shakes and shimmies to a peppy 80s mix as the crowd watches the men who have become a dancing phenomenon at Concordia show their skills and humor yet again.

“I never would have expected my college years to be filled with so much dance,” junior Shane Yager said, reminiscing about his time as a part of the Men of East. “It was unexpected, but fun.”

Yager was the driving force behind the formation of the Men of East, which was originally made up of male RAs from East Complex. The group got its start last Christmas at a Residence Life holiday banquet during which the men sang a carol accompanied by a dance routine.

It was then that Yager began to think that the group could be something more. He decided that they should make a run at Cabaret. At first, the guys were standoffish, but as the momentum built, so did their excitement.

Yager said that he mixed the music for the performance and choreographed the routine himself.

“It was hard since I’m not a dancer,” Yager said.

But he worked diligently, and it paid off. The newly christened Men of East made it past Cabaret tryouts, and were set to dance in front of the whole school that fall.
“I was terrified,” Yager said. “I’m horrible at going on stage.”

Despite their fears, however, the group enjoyed the performance, and was well-received by the Concordia community.

“Cabaret was a great experience,” Yager said. “Everyone seemed to enjoy it.”

The group went on to be a part of a Flash Mob dance in November to raise awareness for the Concordia Dance Marathon, but wasn’t planning any more appearances. The Cobber Dance Team had different ideas, however.

“Every year the dance team picks some guys to dance with,” junior Bruno Surdo said. “When they saw our dance at Cabaret, they asked us to dance at a halftime show.”

Thus ensued a month of practicing, leading up to the Jan. 19 basketball game. The men worked together with the dance team to create the lively routine and said they had a good time doing it.

“The girls made it fun and enjoyable for us,” senior Sudhir Selvaraj said. “The guys are just random, awkward human beings, so it was fun to get out there and dance with girls who actually know what they’re doing.”

“It’s really fun to dance with people who are open to the experience,” Duncanson said. “At practice, we had a really fun atmosphere, and it was contagious.”

New Cobber Dance Team coach Nicole Langdahl said she enjoyed the work ethic that the Men of East brought to the group.

“They’re hard workers,” Langdahl said. “They actually practiced a lot outside of practice too.”

She also said that the co-ed dance was a definite crowd pleaser at the basketball game, and audience members agreed.

“It was fun to see the guys get out there,” senior Jessamy Alto said. “In some aspects, they are just as talented, especially in the shimmies!”

After their appearance at the basketball game, the Men of East were invited to dance at Mr. Concordia. With a few minor modifications to their routine (including a sultry shirtless salsa during “I’m Too Sexy”), the men appeared again.

“Mr. Concordia is always a good time, and we were happy to help out with it,” Yager said.

Are the men going to wow Concordia again with their swift moves? Who knows, but there are whispers of another Flash Mob event being planned by the members of the Men of East, and Yager tells Cobbers to keep their eyes open the next time they are in the Atrium.

Yager also mentioned that plans are in motion for Men of East II to take Concordia by storm this fall.

“I’m hoping that we can get another Men of East dance going for Cabaret next year,” Yager said, going on to say that it will be a whole new dance with a lot of new guys. Yager said he looks forward to continuing the group.

“The Men of East are a great group of guys,” Yager said.

“We were able to capitalize on the bonding we had through [the dance group],” Surdo said. “It’s a little different than we usually do, but it was a lot of fun.”