Show Up or Fail

By: Patrick Ross
In: Columns, Opinions
With: 0 Comments 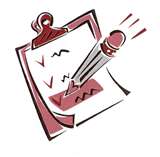 It’s that time of the school year where, for the second time, you begin to take stock of which of your teachers has the most strict attendance policy, and figuring out how many you can miss before your grade takes an immediate turn for the worse. It’s that time of year again where you lament that, if you’re sick, most teachers will demand a note from your doctor, even if you don’t want to spend the money to go in and get checked out. Basically, it’s that time of year again where you don’t want to be in class, but you’ll have to show up anyways.

It’s interesting to ask students at other schools about their attendance policies. Most will look at you blankly and remind you that they’re in college, not high school anymore. Then you have to explain how, yes, Concordia still honors that lovely tradition of holding your grade over the fire to make you come to class.

I remember reading an article in last year’s Concordian that suggested skipping class. I’d like to throw out the fact that this isn’t my point. Instead, the gist is that by this juncture in our education, we should be responsible enough to be held accountable for our appearance in class by ways other than an attendance policy.

Certainly, like nearly all arguments in college, it relates to the fact that we, the students, are the consumers. Obviously, with such a large investment, we should ideally be at all our classes. Yet it should be our interior motivation, not that of an attendance sheet and our grade at stake, that makes us come to class. Any self-help book or speaker or intro-to-psych class will tell you that finding motivation inside yourself is much more productive than feeling forced into something. If a professor is there to teach, how much good will he do with a cadre of sick students who weren’t quite sick enough to go to the doctor’s office but sick enough to not be in class (mentally or physically).

Most professors will hold a policy that allows 2-3 absences before your grade starts to take a hit. Thankfully there’s some leeway, but I think that we can at least make a better arrangement than that.

The students who are consistently skipping are going to see their grades tank anyways. It might be brought up that “in the real world” we’ll have to show good attendance. Yes, of course, we all get that. Yet again, in that scenario we’re being paid to show up as opposed to the college setting. The idea that threatening our grades will build good, timely citizens doesn’t hold water. I’m also not asking for any “reward” for having good attendance – such a thing would again be counterproductive and continue the self-importance issues that our generation loves to foster. I’m asking for simply no policy whatsoever.

From the perspective of an ill student, I’d much rather be in bed resting than wheezing and sniffing miserably through class. That doesn’t mean I’d be using every sniffle to skip class though – I know it’s in my best interest to be there if I can manage it. If I am healthy and in class, I also know that I’d much rather the other miserable sick students be in their beds too, as opposed to distracting the class and putting an extra burden on the professor (not to mention possibly getting more people sick). I distinctly remember a period of just a week where nearly all of campus developed the swine flu last year – easily preventable if more students had felt comfortable missing their classes and staying home.

And if students do take it upon themselves to abuse a lax or non-existent attendance policy – so be it. In the most stripped down of reasoning the college still gets paid, the true faculty to student ratio improves, and classes aren’t held back by students who don’t want to be there. Such students will see real-world consequences quite shortly, without the imposed attendance requirements.