By: Patrick Rundlett
In: Sports, Winter
With: 0 Comments 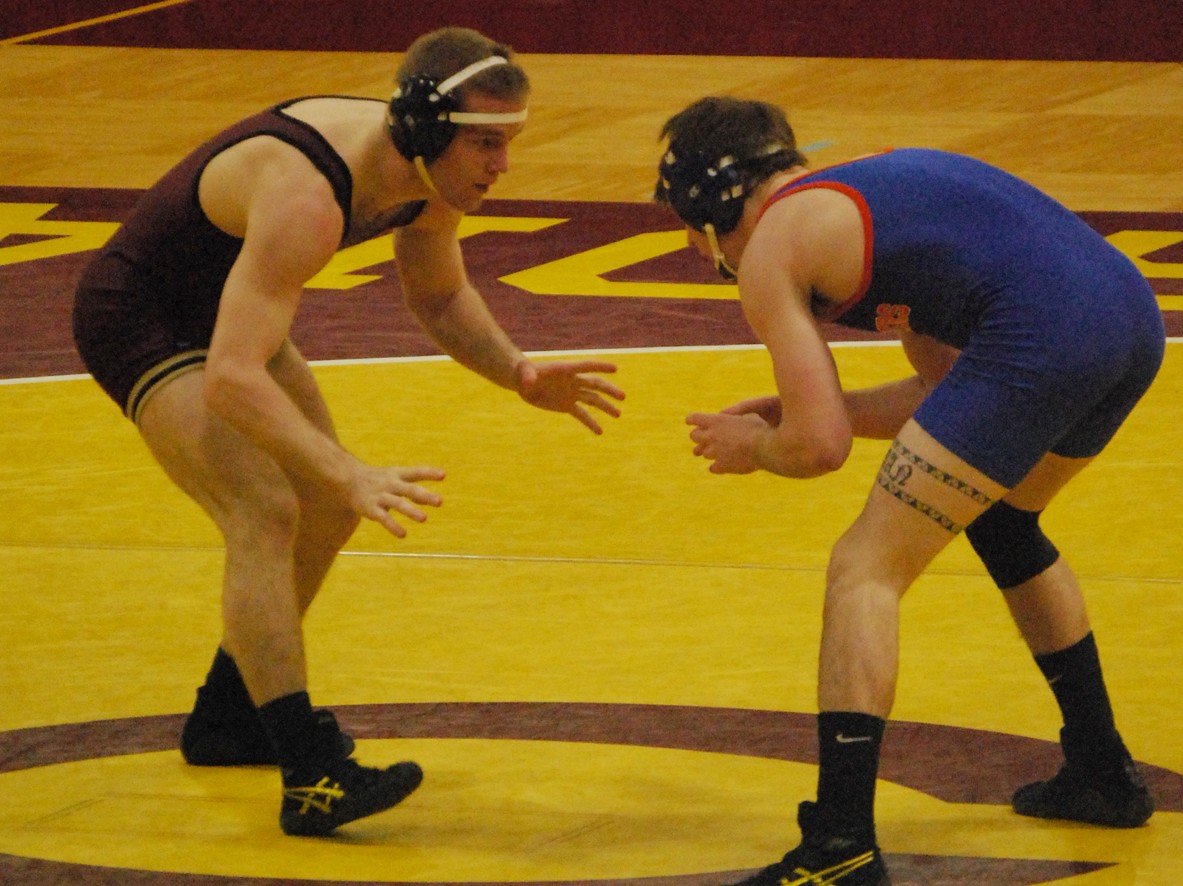 The old saying goes, you’re supposed to have a short memory in athletics. That applies to mistakes as well as successes; the idea that one needs to accept the moment, whether good or bad, and look forward to the next one. The Concordia wrestling team embodies that sentiment this season.

Coming off of an impressive season last year, which included a national champion, and three All-Americans in total, expectations stayed high for a team that finished in 9th place at the NCAA Division III National Tournament.

Defending National Champion Phil Moenkedick is satisfied with how the team has done.
“I would say that we have done very well overall this season,” he said. “We hold ourselves to a pretty high standard so there have been some disappointments but the effort and the way we have competed this far has been very good.”

Moenkedick said that before the team left for the inaugural Minnesota Duals in Perham. The team certainly performed well as they took down both No. 6 St. Johns, and the defending national champion No. 3 Augsburg.

“I think we have done well this year,” the All-American said. “We have had some ups and downs, but I feel like we are getting close to being where we need to be at the end of the year”

So far the season’s only blip was a thorough 9-31 loss to Wartburg in the quarterfinals of the national duals in January. Wartburg has a very successful program of their own, having won 7 of the last 15 national titles. The other title winner in the last decade and a half? Augsburg.

Both Dankers and Moenkedick want to improve on the team’s finish last season, and the results would suggest that is a realistic possibility. However, the team’s finish is dependent on individual performance, an inherent quality of the sport
Moenkedick felt that his performance has reflected that of the team.

“Overall I think it [his wrestling] has been pretty good but there also have been times when I could have wrestled at a higher level.”

Dankers had an oddly similar response.

“I think it’s been similar to the team’s, been wrestling well overall, but had a few matches were I know I could have wrestled better.”

The motivation to do better is a quality deeply ingrained in the team, and considering how well both wrestlers did last year, it would be easy to get complacent.

Dankers wants to do better than last year and uses his All-American status as a way to keep himself working hard.

“I think it [being an All-American] certainly adds more pressure to get back to that level, but in my eyes it’s a good pressure,” he said. “I use it as a motivator in practice and workouts to push myself because I know I want to get there again.”

Moenkedick does the same with his defending national champion title.

“It’s motivational,” he said. “It reminds me of where I want to be when this season is over and that keeps me focused on this year, and what’s ahead in these next couple months…there is a little more pressure that comes with it, but it doesn’t change the way I train or the way I wrestle.”

Dankers is a firm believer that the team can do better than last year’s showing at nationals.

“Yes [the team can improve]. We have a lot of people that have really pushed themselves to the next level individual wise, and bringing back almost our whole team from last year was really nice.”

The team is peaking at the right time, and all signs point to another good showing at nationals. The motivation and drive is obvious—all that they need are the results.