By: Brandon King
In: Campus, Featured, News, World
With: 0 Comments 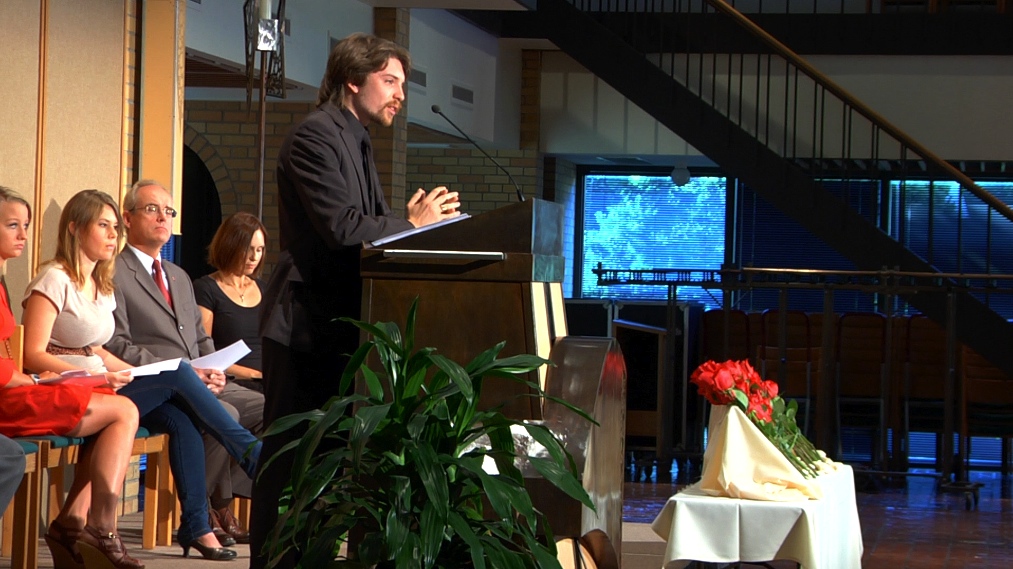 It’s been said that there’s no rose without a thorn.

A decorative display of 77 roses in the Knutson Center Centrum invited dozens to remember the Norwegians who were murdered on July 22, in the country’s most violent event since World War II. Each flower was a memorial for every life cut short, in a special chapel service on Sept. 7.

The Norwegian killer, Anders Behring Breivik, has been charged with terrorism and is currently held in solitary confinement for the brutal massacres in the country’s capital city and a nearby island called Utøya.

“Those who lost their lives were someone’s son, someone’s daughter, someone’s parent, relative or friend,” said Bjørn Kvernstuen, who spoke for the congregation, and is a student here from Norway. “We share so much with the victims.”

On that day, Breivik set off a car bomb that killed eight people in downtown Oslo, directly in front of the office building of the Norwegian prime minister. Less than two hours later, he murdered 69 more in a shooting rampage on the Utøya island that was being used as a summer camp for young people connected to the prime minister’s political party. Most of the killed were teenagers.

Breivik has been described as a right-wing extremist who wrote of his anger for Norway’s public policy regarding such issues as immigration. He specifically wrote of his abomination for Islam and called for crusades against a “Muslim takeover” of Western Europe.

Two Concordia seniors, Nathaniel Cook and Kelsy Johnson, were studying in Oslo and were close to the panic of the first attack. Cook described the “surreal” atmosphere after he learned that he was just miles away from the terror of the bomb.

“I was sitting in my room when I heard the blast,” he said. “It had just stopped raining, so I assumed it was thunder.”

Cook and Johnson were selected by former President Paul J. Dovre to study world issues on behalf of the Nobel Peace Prize Forum, which is organized by five colleges associated with the Evangelical Lutheran Church in America. Cook worked on a special project there about peace in Norway.

“It’s unfathomable,” he said. “Norway is seen as the pinnacle of peaceful nations. It’s unbelievable that such a thing happened there.”

For a quiet chapel, Kvernstuen and Milda Halvorson, assistant professor of Norwegian and Scandinavian Studies, offered solemn remembrances. Kvernstuen spoke about the victims and his sadness after losing two personal friends. He described them and the others killed as students who were committed to making good changes for the world.

“Like us, they got up in the morning, brushed their teeth and put their shoes on,” Kvernstuen said. “All while their minds were ‘brewing’ and solving tough world matters.”

After Kvernstuen spoke, the soft, minor chords of “Mor Åses Død” (“The Death of Mother Åse”), composed by Edvard Grieg and performed on piano by music professor Robert Chabora, accompanied a display of the names and ages of the 77 lost on a screen behind the altar.

Halvorson spoke before a concluding hymn and described the moment she heard of the massacres as a time of great sadness for the families of the murdered. She spoke about the future of peace and called for responsible engagement in the world.

“Words can be hard to find to express the grief and hope that violence can be overcome,” she said. “There is so much violence and hatred, but there is also love, compassion and tolerance.”

Cook said it was compassion that raised the spirits of the Norwegian people after the massacres. He said they upheld their remarkable record of peace by not responding with anger or revenge.

“Norway served as an example for how a nation can respond in the face of tragedy,” he said. “It really set the bar high for the rest of the world.