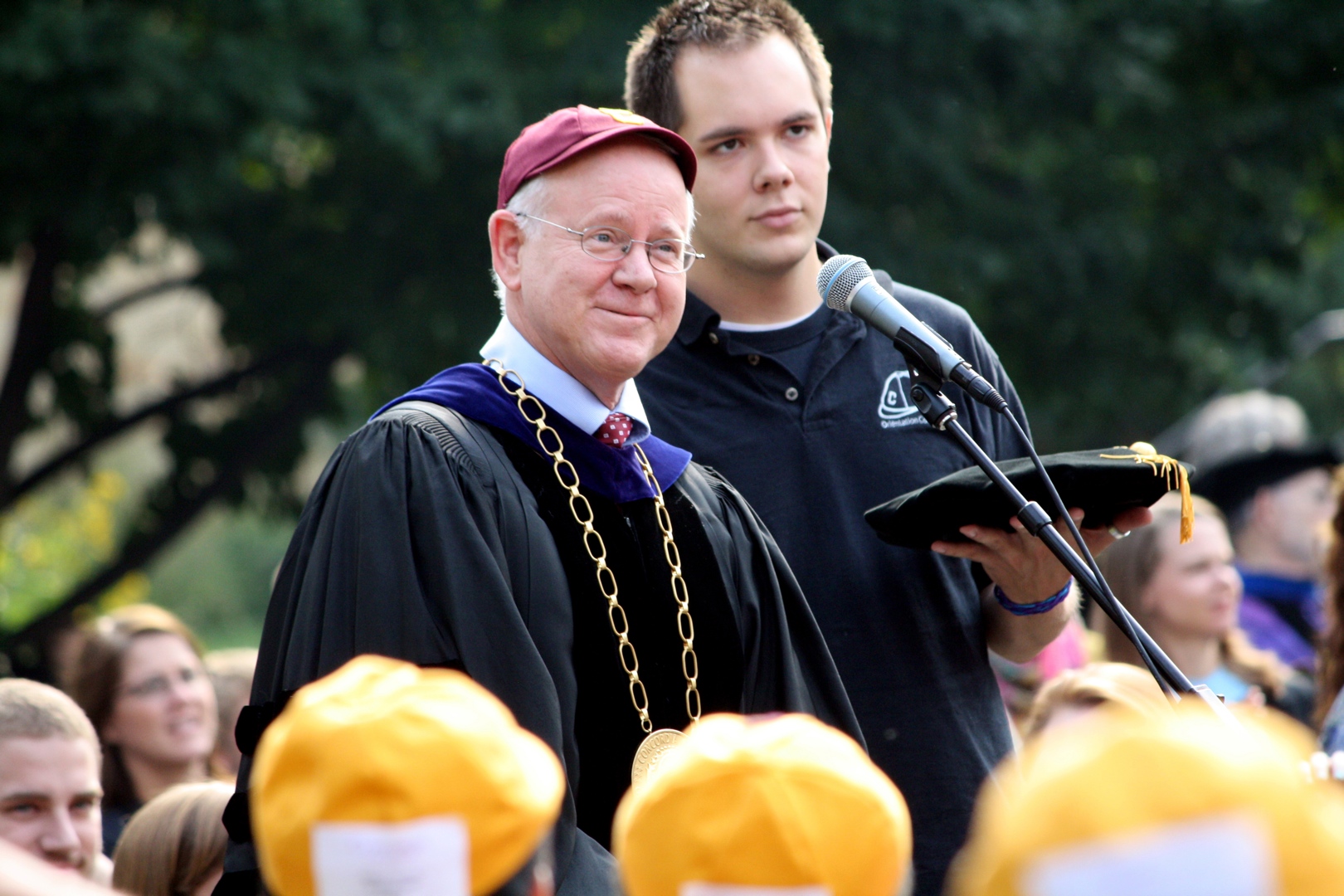 For nearly every freshman, the first few weeks of college are a combination of new experiences, fear of the unknown and adjustment to a completely new lifestyle. As they traverse campus in their beanies, they learn about the rich traditions of the Cobber lifestyle while taking their first few steps into their college years.

This year, new President William Craft joined the students, proudly wearing his maroon transfer beanie while taking in his first orientation week as a Cobber.

“Orientation was a great gift to Ann and me,” Craft said. “We had the great opportunity to meet and work with a dedicated group of students.”

Craft and his wife, Ann, moved to Moorhead on July 7 from their previous home in Decorah, Iowa, where Craft acted as dean and vice president of Academic Affairs at Luther College.

“This entire transition has been thrilling and energizing,” Craft said, despite how busy his first weeks with faculty and students back on campus were.

Craft and Provost Mark Krejci have spent many hours working to acquaint Craft with both the college and the community. From speaking with student leaders and sports teams to meeting one-on-one with each member of the Board of Regents, Craft has had little downtime as he immersed himself in his new life.

“Two thousand and eight hundred students, not to mention faculty and staff, is a lot of people,” Craft said. “I know that I cannot get to know them all in the first month, but that is why we have been deliberate in creating occasions to meet with these people and build relationships.”

Senior Ryan McAdam, a member of the Orientation Committee, had the opportunity to eat supper with the Crafts one night during Orientation week.

“He and his wife were very casual and down to earth,” McAdam said. “Even though he is president and an authority figure, it seems like he is so willing to put that position aside and sit down and just talk.”

McAdam also explained how surprising it is that he has gotten to know Craft so well since beginning the academic year.

“In his short time here, I have gotten to know him better than I know most of the other administrators and high authority figures at Concordia,” he said.

While Craft calls his busy schedule and transition process a “collaborative effort,” Krejci thinks that with how much they have thrown at him so soon, he has adjusted quickly and impressively.

“He came here wanting to do some things, knowing that he needed to immerse himself in this campus,” Krejci said. “I am impressed by how quickly he has developed a deep appreciation for the mission, not to mention the ability to articulate our mission in a way that is inspiring.”

The Crafts look forward to hosting small groups of faculty and students in their home to build greater relationships and have conversations about the importance of liberal learning, in addition to enjoying the Fargo Moorhead community.

“Our move to Moorhead has been a real gift to Ann and I,” Craft said. Already they have grown to enjoy taking in movies at the Fargo Theatre and biking on the not-nearly-as-hilly terrain of the region, all while adjusting to a community of more than 200,000, compared to the 8,500 of Decorah.

“This is a great opportunity for Ann and me to be extended to the larger community,” Craft said. “There are so many intercultural and interfaith backgrounds, and lots of diversity. It’s a great thing to see.”

While the next few months will surely be busy, Craft said that he looks forward to every new experience he will be having as a Cobber.

“While we don’t have lots of time that isn’t dedicated to work or sleep, I do love that we are at a place where part of our role is to be engaged in the cultural, athletic, spiritual and service life of the college,” Craft said. “We don’t call that a grim duty; we call ourselves lucky.”