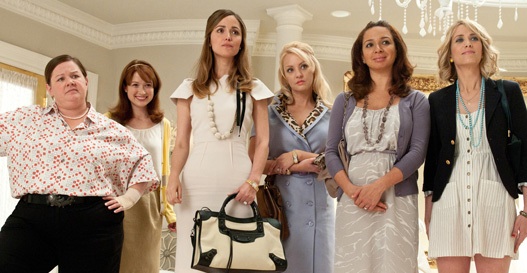 We can all relate to being stuck in a one-night-stand sort of relationship, being asked to be the maid of honor in our best friend’s wedding, and then getting pulled over by a cop for broken taillights  thus beginning a relationship with said cop, who turns out to be really charming and sweet, so naturally we run away, go a little crazy, and start to ruin everything happening in our lives right now, right? No, I didn’t think so. But you can watch someone else go through these terrors by going to, renting, or buying “Bridesmaids”, which came out on DVD Tuesday from Universal Pictures.

This movie proves women can be funny in leading roles, as opposed to only supporting roles. Kristen Wiig leads a troupe full of memorable people from “Saturday Night Live,” “The Office,” “Reno 911,” “Gilmore Girls,” and more to make a movie that relates to all of womankind.

The plot revolves around Annie (Wiig), a 30-something woman who lives with strange English twins in a small apartment in New York. Her best friend Lillian (Maya Rudolph) just got engaged, and she asked Annie to be her maid of honor. The other members of the bridal party include Rita (Wendy McLendon-Covey), Lillian’s cousin with three boys who she finds disgusting; Becca (Ellie Kemper), Lillian’s work friend who just got married; Megan (Melissa McCarthy), the groom Doug’s vulgar sister who swore she met a dolphin who looked into her soul when she fell off a cruise ship; and Helen (Rose Byrnes), the perfect wife of Doug’s boss who claims she and Lillian are joined at the hip.

The characters in the movie portray women in a funny yet accurate light, and I couldn’t help but laugh at the hilarious and sometimes shocking situations the women get themselves into. One of the most memorable moments for me occurs at Lillian and Doug’s engagement party. As maid of honor, Annie makes a short but sweet toast, which is then followed by Helen making a heartfelt speech during which she talks about a trip they took to Thailand. This tennis match of speeches continues four more times to the point where it almost gets awkward, but it’s so funny that no one cares.

The bridal club later ventures to what appears to be a run-down restaurant that makes authentic Brazilian food. Everyone orders meat except for Helen, and then they head over to a very expensive, couture bridal shop. Each of the bridesmaids chooses a dress they think would be great for the wedding, and Lillian tries on an older version of a dress by the same French designer who will be designing her wedding dress. Shortly thereafter, all of the bridesmaids except for Helen get violently ill and begin to…well, if you’ve seen the trailer then you know what I’m talking about. This scene is not for the squeamish (myself included, apparently). One of the attendees working at this boutique tries to get the girls to go across the street to the bathroom of a different place, and Lillian is the only one who tries. Unfortunately she only makes it to the street before crouching down and…you get the picture.

Many other shenanigans go down, particularly when the bridal party is on a plane to Vegas and everyone is sitting in first class except Annie, who could only afford a ticket in coach. To make a long story short, Annie ’s nervous about flying so Helen gives her some scotch, and soon Annie is drunk. She tries to sneak into first class by wearing sunglasses to disguise herself, for one thing. The other bridesmaids also decide to drink some alcohol and they, too, get a little drunk. Becca soon tells Rita “You are more beautiful than Cinderella, you smell like pine needles, and your smile is like sunshine!”

Another important character in the movie is Office Rhodes (Chris O’Dowd), the cop who pulls Annie over for her broken taillights towards the beginning of the movie. She promises to get them fixed but she doesn’t. O’Dowd plays Rhodes brilliantly, using the same lovable charm and awkwardness he had as Simon in “Pirate Radio.” She ends up in a car accident because of those lights, and Officer Rhodes comes to the scene. Then her old fun buddy also shows up to take her home. Talk about an awkward situation.

Even though the movie has some occasional downfalls (like an irrational blow-up in Annie’s love life), overall it’s a movie that all women and perhaps even some men can relate to. Yes, it is a chick flick at heart, but it’s definitely not a typical one. This is full of swear words, vulgar references, catfights, competition,   drunken escapades, a surprise musical number and more, so what else could you want?