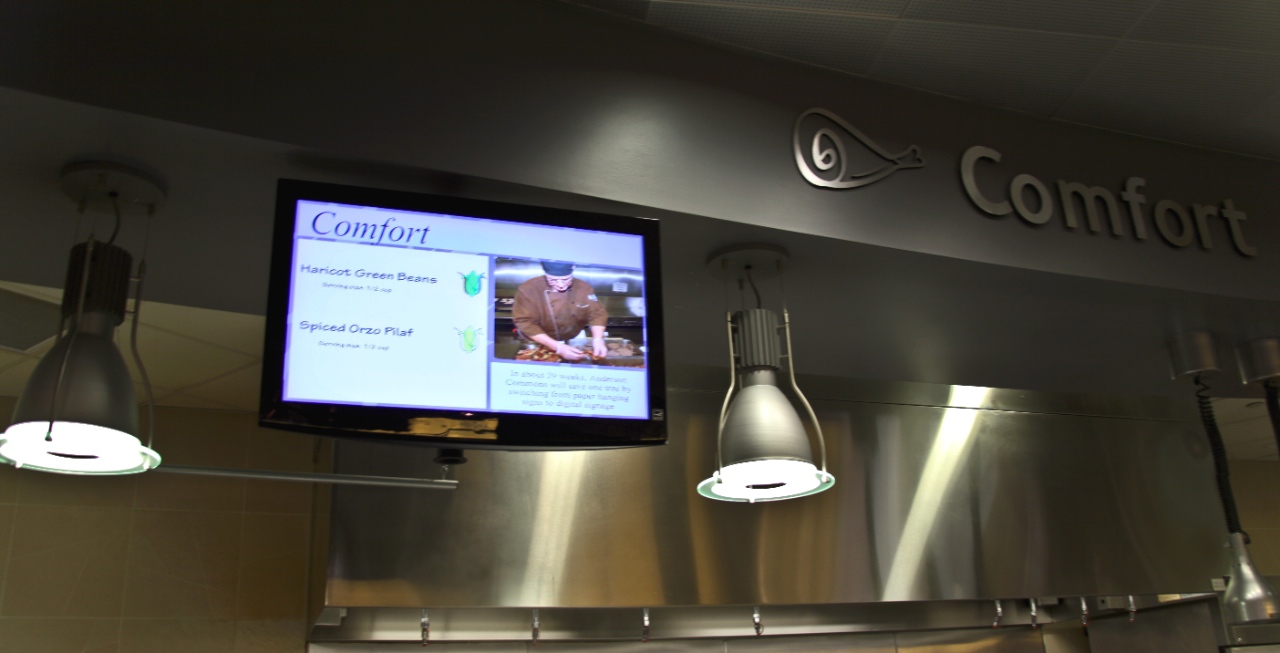 With the technological age on the rise, Concordia is implementing technology to aid on-campus communication.  Examples of this can be seen in the Knutson Campus Center with news displays on television monitors.  This trend has continued into Dining Services and the athletic facility. But with six news displays in the Campus Center alone and more being added in the aforementioned locations, many students are asking how much digitalization is really necessary.

“My first reaction is that most of them aren’t being used and that it’s a wasted investment,” senior Steven Edwards said.

Edwards said that the monitors could be useful, but that the number of them, particularly in the Atrium, makes them impractical.

“It’s excessive,” Edwards said. “I don’t really feel that having potentially multiple displays telling me the same information is useful.”

“I want to applaud the fact that the administration is trying to be more user-friendly,” Herman said. “But the question is: What is the saturation point?”

Despite these criticisms, Director of Student Programming and Facilities Paul Wraalstad is positive about the implementation of these digital screens and sees them as a step in the right direction toward becoming a more modern and sustainable campus.

“Digital messaging is kind of the new phase of getting away from paper and being more flexible,” Wraalstad said.

He explained that the monitors in the Atrium were part of the original design of the building, stemming out of a desire to make the space more digital, more sustainable and more aesthetically pleasing.

Wraalstad said that in the old campus center, large sheets of butcher paper strung up on the walls and ceilings were used to advertise events and spread information. But with the building of the new Knutson Campus Center, the college wanted to move beyond this way of conveying information.

Wraalstad pointed out that the college has done polls in previous years which showed that students were overall in favor of the monitors and the information they broadcast, which includes campus events, news blurbs and the time and temperature.

One such supportive student is sophomore Denise Sykora, who enjoys the convenient updates she gets by looking at the TVs.

“It’s nice to have a quick blurb about what is going on [in the news],” Sykora said. Her busy schedule often makes it hard for her to keep up-to-date on news and events, but having news blurbs on the monitors allows her to continue feeling connected.

The Dining Services administration is also in favor of the screens. Over the summer, they replaced the paper menus by Comfort in Anderson Commons with a monitor screen and had a trial run before students came back in the fall. The trial was so successful, according to Director of Dining Services Debra Lee, that the college now hopes to have all the paper menus in DS replaced with monitors by mid-semester break.

She said that the investment made in the monitors (which cost about $300 each plus operating software) will pay for themselves within a year. By using the monitors, DS will save on the paper costs of printing out a constant flow of new menus and nutrition cards and the labor time and costs needed to change the menus with each change of food.

“Students will get more accurate information in a timely manner,” Lee said.

Lee hopes that the monitors can be expanded not only for menu use, but also to display allergy information, food origins and fun facts about what is being served that day.

Edwards, an employee of Dining Services, is sympathetic to the flexibility and ease of use that the monitors offer, but remains skeptical about the cost.

“Again, while I understand their want to go digital…I think there is a more cost-effective way to do it,” he said.

Despite the cost, however, Dining Services is hoping to continue to implement more and more TV monitors in their serving spaces. Lee said that DS is also considering installing digital screens in The Maize and the Korn Krib sometime in the future.

“If it ends up being a win-win all the way around, then yeah, we’ll probably put it in the retail spaces as well,” she said.

Wraalstad said that the increased use of TV monitors is also something that Facilities Management and Student Government Association are looking into.

“SGA has been considering a plan for several years to add video messaging screens in the residence hall lounges,” Wraalstad said.

The barrier keeping this plan from being put into action is the question of who will manage, monitor and update the screens.

Herman questions this extensive use of digital messaging, however. He said that he finds digital messaging more intrusive than its paper counterpart, and he wonders what kind of effect that will have on the college community.

“We might want to ask whether having ubiquitous screens serves the need of people for quiet, reflective spaces,” Herman said.

For now, however, Wraalstad hopes simply to make the monitors reach more people.

“I think that further campus education and utilization would increase our benefit,” Wraalstad said.