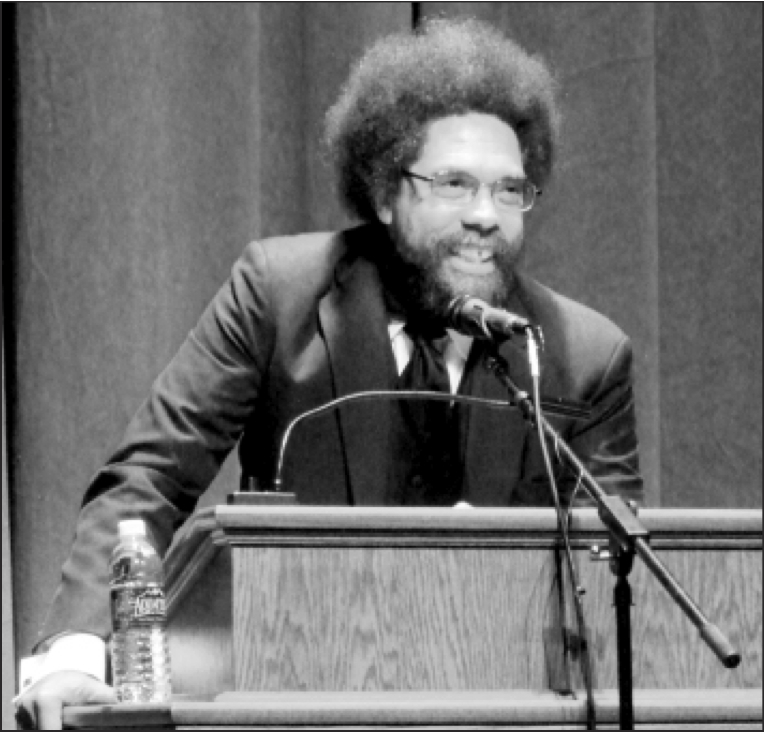 “I hope and pray that I say something that unsettles you,” he said.

From that moment, he had the entire theater captivated until the final applause.

West is a graduate of Harvard and Princeton. He has taught at Yale, Harvard and the University of Paris, authored 19 books and edited 13, and appears frequently on the “Bill Maher Show,” “Colbert Report,” CNN and C-SPAN. He made his film debut in “The Matrix” as the character Councilor West, and has made three spoken word albums collaborating with Prince, Andre 3000, Talib Kweli, and Bootsy Collins.

Like his many talents, West’s topics that night varied everywhere from Lil Wayne to the necessity of self-examination.  He spoke primarily about the question, “What does it mean to be human?” exploring every layer of the answer.

For example, West is clearly what America would define as successful.  Yet he referred to his long list of achievements with a careless wave of his hand.

“Just like you it was my mama’s love push that got me out,” he said.

His point was that no matter who a person is or what a person looks like, the ultimate truth is that we are all fundamentally human beings – a point that Concordia senior LaCresia King found especially inspiring.

“I think it’s something we forget all the time because we are a society that focuses on the differences,” King said after West’s talk. “It’s so important to remember that at the core, we are all the same.”

For a man of 58 years, West certainly displayed an incredible amount of spunk.  Or, as he might prefer, “funk”.  He had the audience laughing, crying and clapping at every other sentence.  He spoke deeply and genuinely, hitting home the idea that there can be no more “thin” thinking, and no more fear of establishing soul to soul connections within communities.

It is no wonder that this 58-year-old philosopher with electrified looking hair quickly became a source of inspiration to many in the audience.

One Concordia student, senior Elise Tweten, expressed her admiration after the show when West went and personally shook hands with the audience.

Of course, this is all while West’s personal bodyguard hustled the crowd into a single file line. West is known for causing controversy by the extreme statements that he makes.  One memorable line of such a nature from this night’s talk was when West spoke of derogatory terms used towards African-Americans.

He explained how love, such as Jesus’ love, releases people from fear and self-incrimination.

It was this very human love that he displayed so sincerely which fulfilled West’s original hope and prayer.  Indeed, Fargo-Moorhead was unsettled, in the best way.