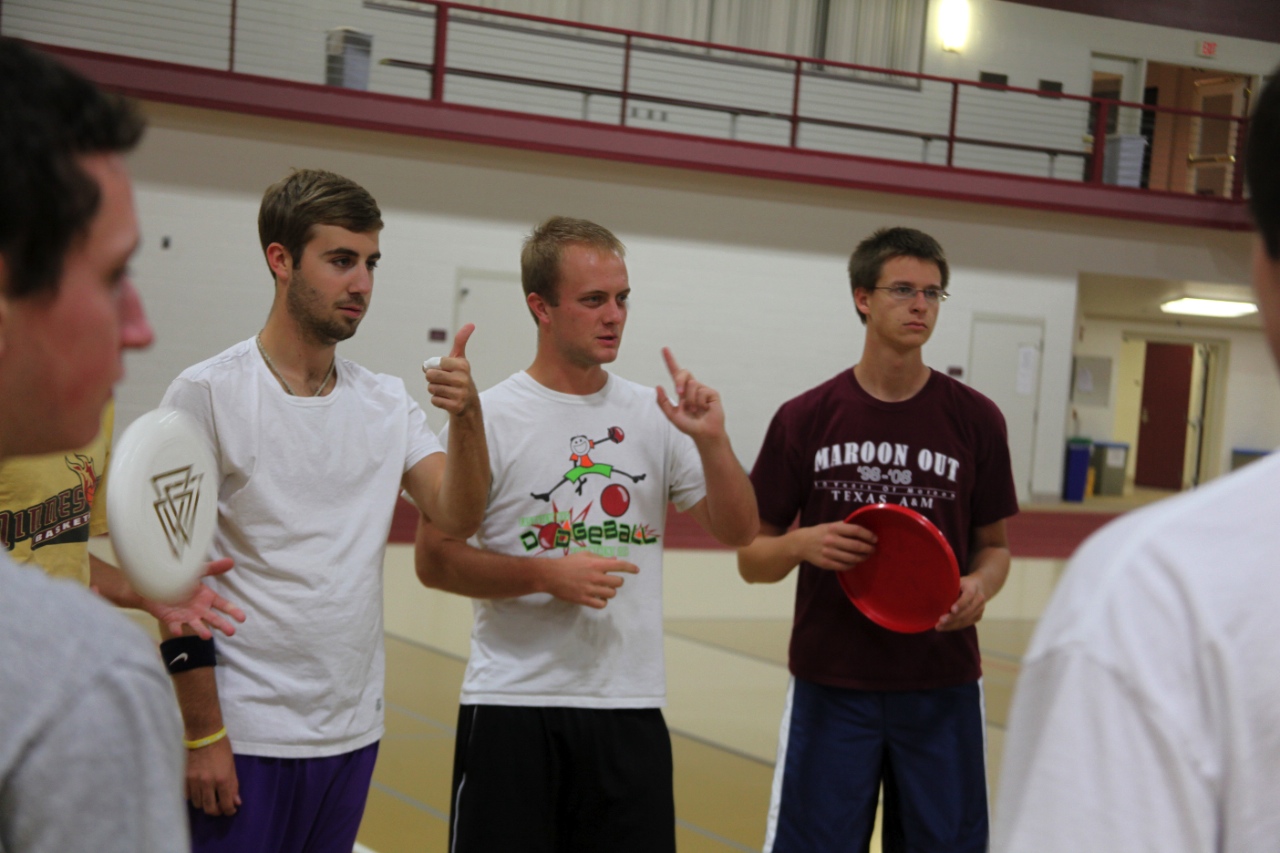 A sharp clapping sound rings out as a disk collides with the floor in Olson Forum. The player holding the disc stands up and throws it to the far end of the court to the opposing team, signaling the start of the extensive dance across the floor chasing after a rounded piece of plastic.

Such is a typical evening in Olson Forum for the many students playing a pick up ultimate Frisbee game.

“This is the first time we’ve had under 20 people this year,” Bryan Vohnoutka, a senior from Eden Prairie, said as he looked on from the sideline.

Ultimate Frisbee games are a near constant sight throughout the year in Olson and also at the practice fields when Intramurals start up.

Vohnoutka and his intramural team have had the unfortunate luck of losing the championship three years in a row, and he hopes to end that streak this year. Even though his team hasn’t won an intramural championship, that doesn’t take away from the good time he has at games.

“I just enjoy the competitiveness,” Vohnoutka said. “It’s a great sport to play, very active [and] very energetic, it’s something you don’t see in a lot of other sports.”

The sport has a wide appeal to many different people. The group of players has a wider range of experience and skill levels. Vohnoutka has been playing for six years by his estimation, though new players are always encouraged to play.

Mackenzie Sturm-Sandstrom, a basketball and self-proclaimed Quidditch player from Crookston, had never played ultimate Frisbee until she came to Concordia.  As a freshman, she’s had her first experiences over the past two weeks.

“I really like it,” she said.  “It’s a really good break from the competitive sports I’m in, and it’s also a really good workout [There are] great people [and] it’s fun.”

Grant Erickson, a senior from Eagan, was a tennis player in high school and had played some ultimate before. He didn’t have the time to commit to the tennis team here, so Frisbee became his activity.

“I’m a sports fan so I just enjoy playing sports, and it’s also a good social activity too,” he said. “Everyone comes out and plays. If you’re here to have fun, I think it really adds to it, [having] fun people to hang out with and run around and break a sweat.”

There is a balance between intense games and having a good time during sessions, be it at pickup games or during the Intramural season.

“It’s got a competitive side to it, but it’s pretty laid back and most people are pretty friendly,” Vohnoutka said. “They’ll help you. If you want to know rules or anything you can just talk to them.”

The laid back atmosphere really appealed to Sturm-Sandstrom in her time playing with the group.

“I’m a pretty competitive person but I also am just new to this,” she said. “I appreciate that I can be competitive, and they are too, but they are also really helpful, and they stop, and they don’t get really get mad at you… It’s a really good learning environment.”

Laid back and ultimate frisbee go hand in hand more often than not.

“We’re very welcoming [and] we really enjoy working with new people. We get new people coming all the time,” Erickson said  “It’s a pretty simple sport to pick up, so even if they don’t have any background, it’s still worth coming out, and we can teach you the game in just a couple pickup sessions.”

Sturm-Sandstrom had some advice for anyone considering joining the games or looking for something new to do.

“Don’t be afraid to just show up. Like you walk in and if you look somewhat lost or interested, they’ll just be like, ‘Oh you want to play?’ and you just hop right in and go for it,” she said.

Vohnoutka summed up the atmosphere that is so clearly apparent at the games and pickup sessions.

“It’s a fun time,” he said. “I enjoy it. The people are awesome and everyone should definitely give it a shot.”

There are pickup games held in Olson at 9:00 p.m. on Mondays, Wednesdays, and Fridays for anyone interested. Anyone interested in the Intramural league can contact the student activities director for more information.