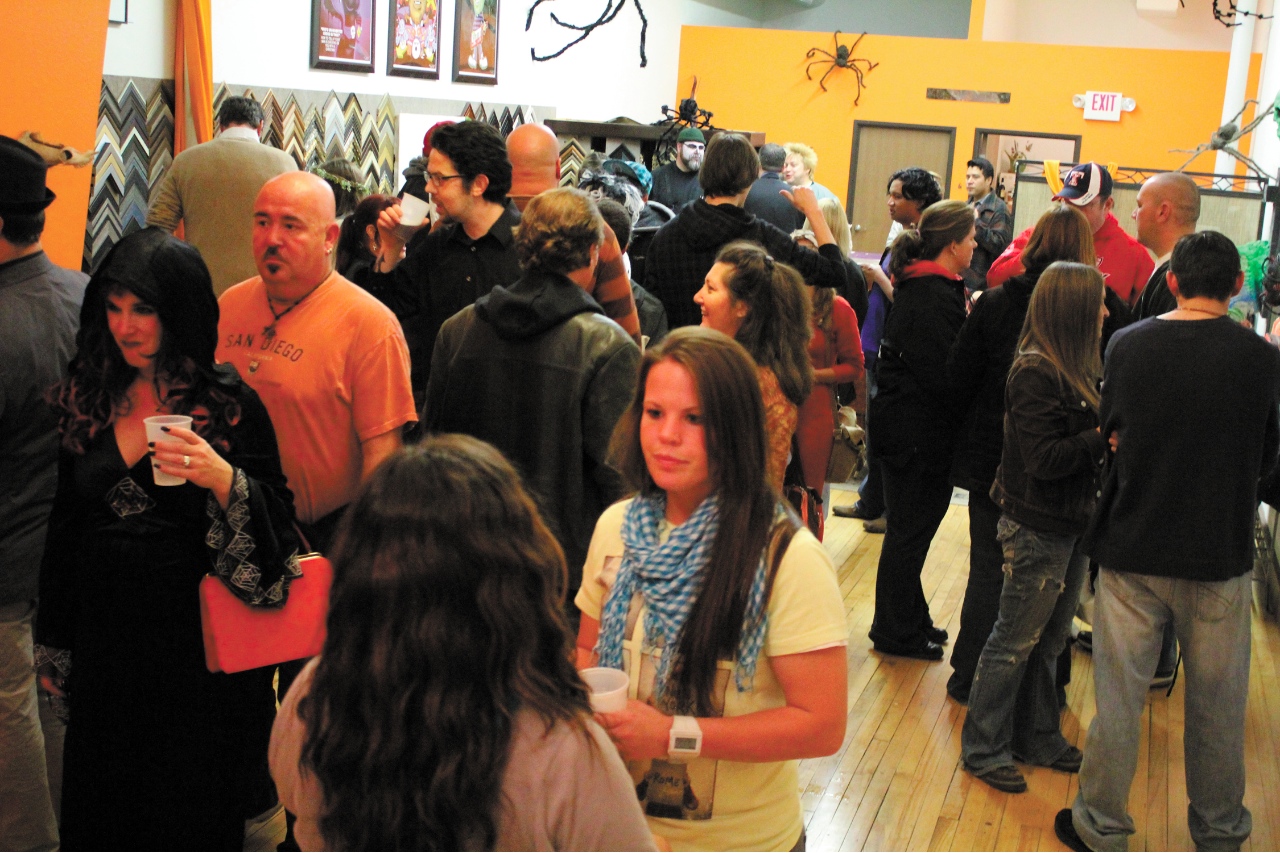 DK Custom Gallery and Framing at Gallery 14 held their first “Crux of the Hollow” art show, which featured many renowned and upcoming Fargo-Moorhead artists and even Athena Funk from Grand Forks. This art show displayed a wide range of talented people who teamed together to make a Halloween themed exhibition. This show offered viewers the chance to come to the gallery (in costume if preferred, which most did) and see the new pieces these artists had to offer.

The Crux of the Hollow’s opening reception was Oct.14 from 8 p.m. to midnight, and it was packed by 8:30 p.m. Gallery 14 entrepreneur and sole-proprietor Denise Knudson said that the idea for the show came during a discussion with friend and local artist Joe Bailey about a year and a half ago.

“At first I was thinking like two or three artists, but Joe [said] no, let’s have a bunch of artists,” Knudson said.

The show featured works by Joe Bailey, Mackenzie Kouba, Punchgut, Trent Balvitsch, Athena Funk, Nathan Mastrud, Chad Kartenson, Chelsey Dahlstrom, Scotch, Al Ness and others, who each brought a different angle to the chosen Halloween theme. Most of these artists have had previous shows with Knudson but this is their first collaboration as a group.

“I like that idea of getting your Halloween out and have some nice stuff instead of just going to the store…they’re one of a kind piece you’re not going to find [anywhere else],” Knudson said. “If you go to Hobby Lobby you can find the same images on poster paper; here you will invest your money but do it wisely and have an existing piece of artwork that is unlike anyone else’s.”

Bailey claimed that the inspiration for the show was “a love of Halloween, design, creepiness, terror, blood and guts.”

“It was an easy subject for a bunch of artist,” Bailey said. “If [people] are in love with Halloween decor, terror and being spooked it’s definitely something they should check out.”

The event itself was a mass of art lovers, most in costume, varying from a bumblebee and a drunk surgeon to a realistic Ghostbuster outfit and a zombie pretending to munch on fake bones. The small orange and white gallery was transformed into a crammed art show with large fake spiders, Halloween music and treats and, of course, spooky art.

People came from all around to dress up, mingle, see the Halloween inspired art and vote for their favorite piece/artist. The winner of this contest would receive a trophy: a sculpture by artist Mackenzie Kouba of a baby head’s topped with an arm raising one, two or three fingers to designate their place in the contest.

Ron Koskela, an art observer from Ada, Minn., came to Crux of the Hollow sporting a black top hat and laughing as he stepped out of the gallery on Friday night.

“I thought it was really neat, a lot of different people, a lot of diverse people,” he said. “My wife’s an artist and my daughter knows a lot of the artists here so we thought we’d stop in, and I get to wear my hat. It’s not the run-of the mill art show.”

“I really like the self-portrait; it reminded me of Kurt Cobain in a straight jacket,” said Cantrell, an art major.

Padilla said she liked all the pieces.

“We were looking forward to [the show] all week,” she said.

Michaelis also enjoyed the Crux of the Hollow’s spooky theme.

“It was pretty interesting,” she said. ”It wasn’t what you’d expect when you go to an art gallery. It was fun to see different perspectives on art that aren’t typically shown,”

Knudson was found smiling next to a zombie-wearing art lover at the gallery during the art show, chatting with fellow artists over drinks and candy corn.

Those who missed the reception can still see the show during the gallery’s regular hours Tuesday through Saturday from 11 a.m. to 7 p.m. and Sunday from noon to 5 p.m. until Oct. 31.