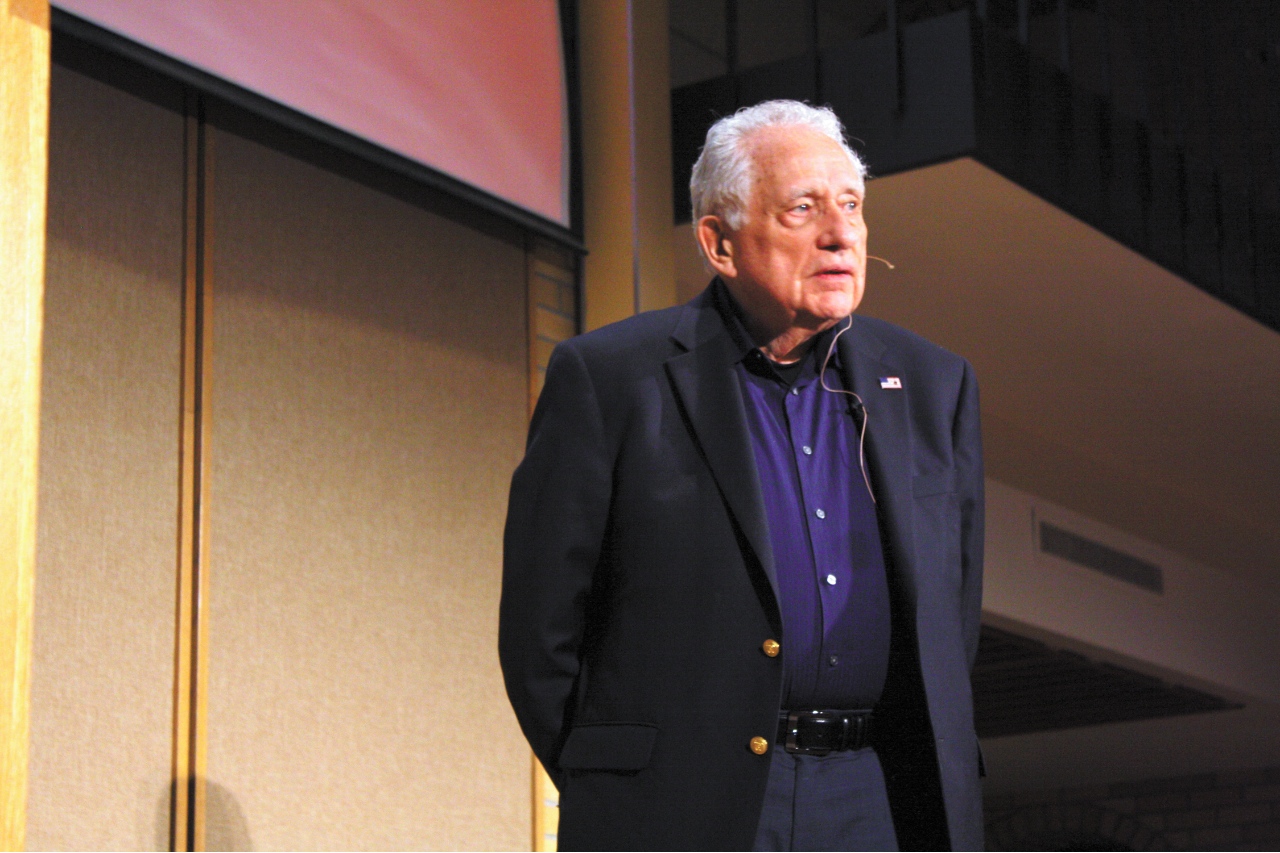 Clint Hill, retired Secret Service agent and 1954 graduate, returned to campus Wed., Oct. 12 for the first time in 50 years. In a public talk he detailed the events leading up to the 1962 assassination of President John F. Kennedy.

Hill was assigned as the head of security for Jacqueline Kennedy and is credited with saving her life after the gunshot that caused her husband’s death. Though she didn’t usually campaign by his side, the first lady rode along in the motorcade during Kennedy’s 1962 campaign in Dallas. Hill jumped onto the back of the car just after the first shot and shielded Jacqueline as she was reaching for material that escaped the President’s head.

As one of 38 Secret Service agents working directly for the Kennedys, Hill said he felt deeply responsible for the events, but he knows now he could not have prevented what happened.

“They were so popular that no matter where we went there were crowds,” Hill said. “We never knew who was in that crowd.”

The audience at the presentation– composed of students, faculty, community members, Hill’s distant cousins and even a North Dakota state senator– filled the Centrum and the overflow seating in the Maize.

Members of the 1954 graduating class traveled to campus to support their classmate. Dave and Barb Kaldahl, good friends to Hill when they attended Concordia College, drove from Pelican Rapids, Minn., to attend the event.

The Kaldahls remember Hill as a standout athlete, especially in football. His athletic abilities helped him in his Secret Service position, Hill said during his presentation, and allowed him to walk or run beside the car that transported the Kennedys during important events.

Penny Burgau, assistant to the registrar and a 1975 graduate, heard about Hill while she grew up because her father was the head football coach when Hill played. What brought Burgau to the event was hearing that Hill had just recently started to speak about his experience.

“I didn’t realize it was really hard for him to talk about,” she said.

Lisa McCubbin, co-author of “The Kennedy Detail” and Mr. Hill’s 2012 book, “Mrs. Kennedy and Me,” moderated Hill’s discussion on Oct. 12. He credits her for helping him find the courage to speak about his experience in the Secret Service. Until she approached him hoping for contributions to the first book, he had not talked about the tragedy.

Fran Bertheuson, another of Hill’s classmates, wanted to hear him speak so deeply that she was the very first person in the line to enter the Centrum when the doors were opened at 6:30 p.m.

“You can tell he’s been through a lot,” she said.

Bertheuson remembers Hill for his athleticism and musicianship and for being a good friend.

Friendship was an important part of the relationship Hill formed with Mrs. Kennedy, and he grew close with her and the Kennedy children, Caroline and John. Hill said he respected her for her strength and character.

“She was a rather private person,” Hill said. “She wanted to bring her two children up in such a way that they weren’t influenced by all the news media trying to constantly take her picture or interview them.”

After previously serving as head of security for President Dwight D. Eisenhower, Hill was, at first, disappointed when he learned of his assignment to Mrs. Kennedy.

“I thought it was going to be afternoon tea parties and fashion shows,” he said.

But he quickly learned that there was more to the task. Together, Hill and Mrs. Kennedy traveled the globe, from Paris and Pakistan to Italy and Mexico City. The pair represented the Kennedy administration at prestigious international parades and events.

At the talk, the audience was peppered with members of Hill’s family who traveled to see him. Phyllis Hill, of Harvey, N.D., and Timothy Hill, of Bismarck, drove to Fargo just to hear their second cousin speak. They had never been introduced to Hill.

“When we were growing up, my parents were always

looking for him in the news footage,” Phyllis said. “I just want to say I met him.”

Current students were enamored with Hill’s story, too. April Reino, a senior political science and German major, was surprised by how he was both personable and real with the audience.

“It was so matter-of-fact mixed with the emotionality of the event,” Reino said.

She was most struck by the photographs Hill showed of Mrs. Kennedy just before leaving the hospital with her newborn son, John Jr.

“You always consider the Kennedys to be a celebrity family,” Reino said, “but they were a family, and they weren’t just political icons.”

It was Hill’s connection to the Kennedys that impressed N.D. State Senator Tim Flakoll.

“This was one of the most interesting hours of my life,” Flakoll said.

The mystery that still surrounds the Kennedy assassination years after has always been intriguing to him.

“[Hill] had not just a front row seat to one of the most important events in history,” Flakoll said, “but he had an active role in it.”

Flakoll also serves as the president of the Tri-College program. He said when people of Hill’s stature speak on any of the Fargo-Moorhead campuses, it adds to the quality of education.

“This is what people will talk about tomorrow at breakfast, at the lunch table, [and] at the water cooler,” Flakoll said.

For his extraordinary accomplishments and courage, Hill was one of three alumni who received Alumni Achievement Awards on Friday, Oct. 14.

Concordia College President William Craft recognizes Hill’s return to campus and willingness to speak about the emotional event as a great honor.

“This is an example of the way in which there are so many deep and abiding stories that weave in and out of a historical moment,” Craft said.

During Homecoming week, Hill also met with Board of Regents chairperson, Judge John R. Tunheim. Tunheim had a role in declassifying documents related to the Kennedy assasination. Check the Concordia home page for more!