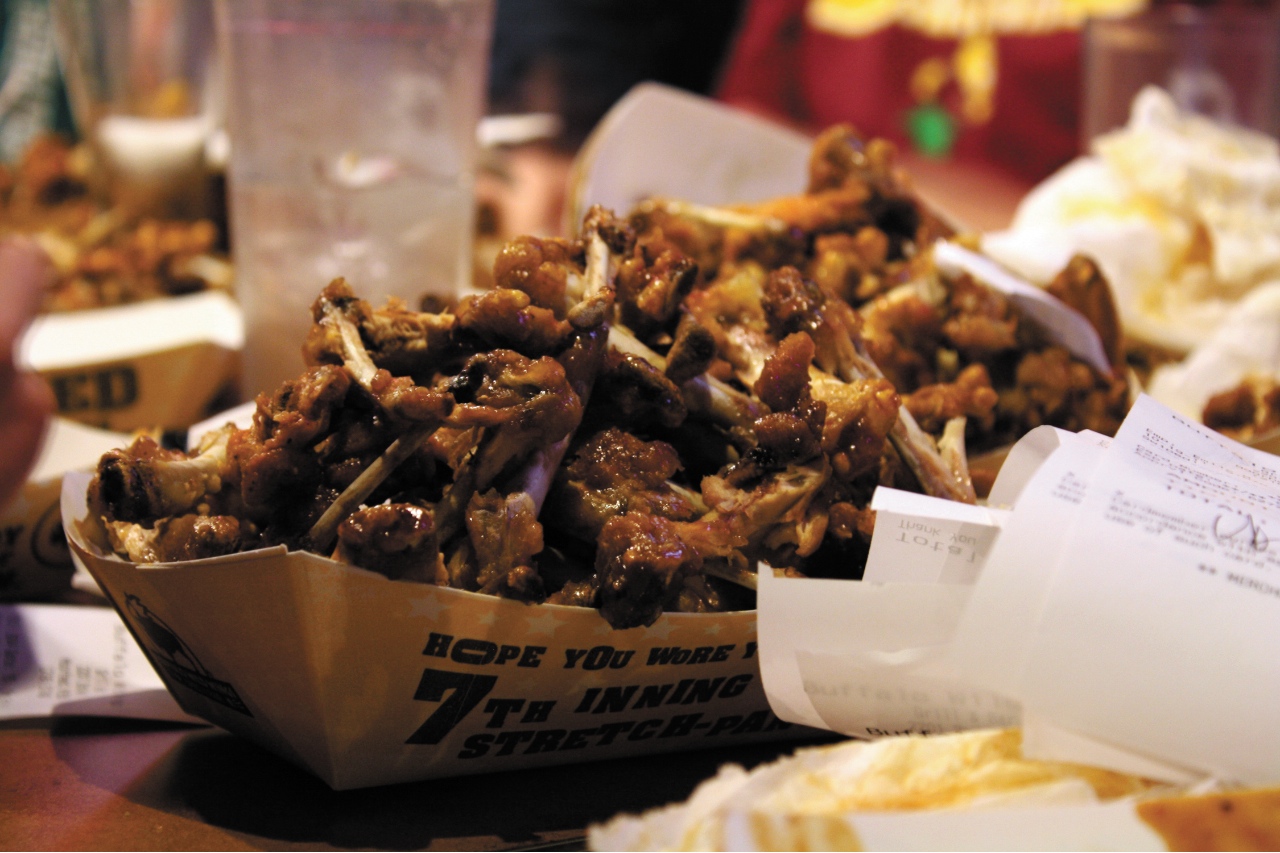 Their outing to the Moorhead Buffalo Wild Wings was not spur of the moment.

When fifteen cobber men from the Concordia Band arrived at the popular sports restaurant on October 19th, they arrived with one goal: Eat 600 wings.

The idea was incited by an article printed in the September 27th issue of the Concordian.  The story focused on being family-less on Family Weekend, but began with the tradition of six sophomore Cobber friends, who had a friendly wing-consumption competition.

The article stated that six guys had eaten 300 boneless wings on “All You Can Eat” Wednesday night.  However, Wednesday nights at Buffalo Wild Wings are “10.99 Unlimited Wings and Fries.”  And the wings are bone-in, not boneless.

Andrew Steinberg ’12, noticed the error, and the fifteen friends decided to create a challenge of their own. “The Big Fifteen,” as they named themselves, would consume 600 bone-in wings, averaging forty wings each.

Knowing the potential danger of jumping headfirst into the situation, they created a plan.  On Tuesday, some of the men executed “Meal Stomach Expansion,” eating more than they would on a regular day.  On Wednesday morning, they all planned to eat high-fiber breakfasts, and light lunches.

Senior Bryn Homuth said he was particularly excited about the endeavor and described his mental preparations.

“I’ve been trying to envision the pile of wings in front of me,” he said.  “I see myself eating the last one, and I see the happiness in myself.”

When the time came, the Big Fifteen didn’t arrive at Buffalo Wild Wings alone. Around twenty fellow students came to support their friends, as did conductors Nathaniel Dickey and Scott Jones. Dickey said he enjoyed seeing band students enjoying themselves outside of band.

“I’m thankful that we don’t have band tomorrow,” Jones said.  “And that we’re not on tour on a bus.”

Senior Nick Ganoe came out of a three-week act of vegetarianism for the event.  His first bite of chicken was, he said, “immaculate.”

Sam Boerboom stated near the end that his digestive system felt “like a game of Tetris.”

Jones thanked the guys for inviting him out to cheer them on.  However, upon seeing the pile of eaten wings on the table, he could only say, “Of all the moments in my life…well, this is one of them.”

The final wing count of the night was 605.  For the Big Fifteen, it was a night of victory.

And they voiced an open challenge to other Cobbers: beat their record.  They dare you to try.