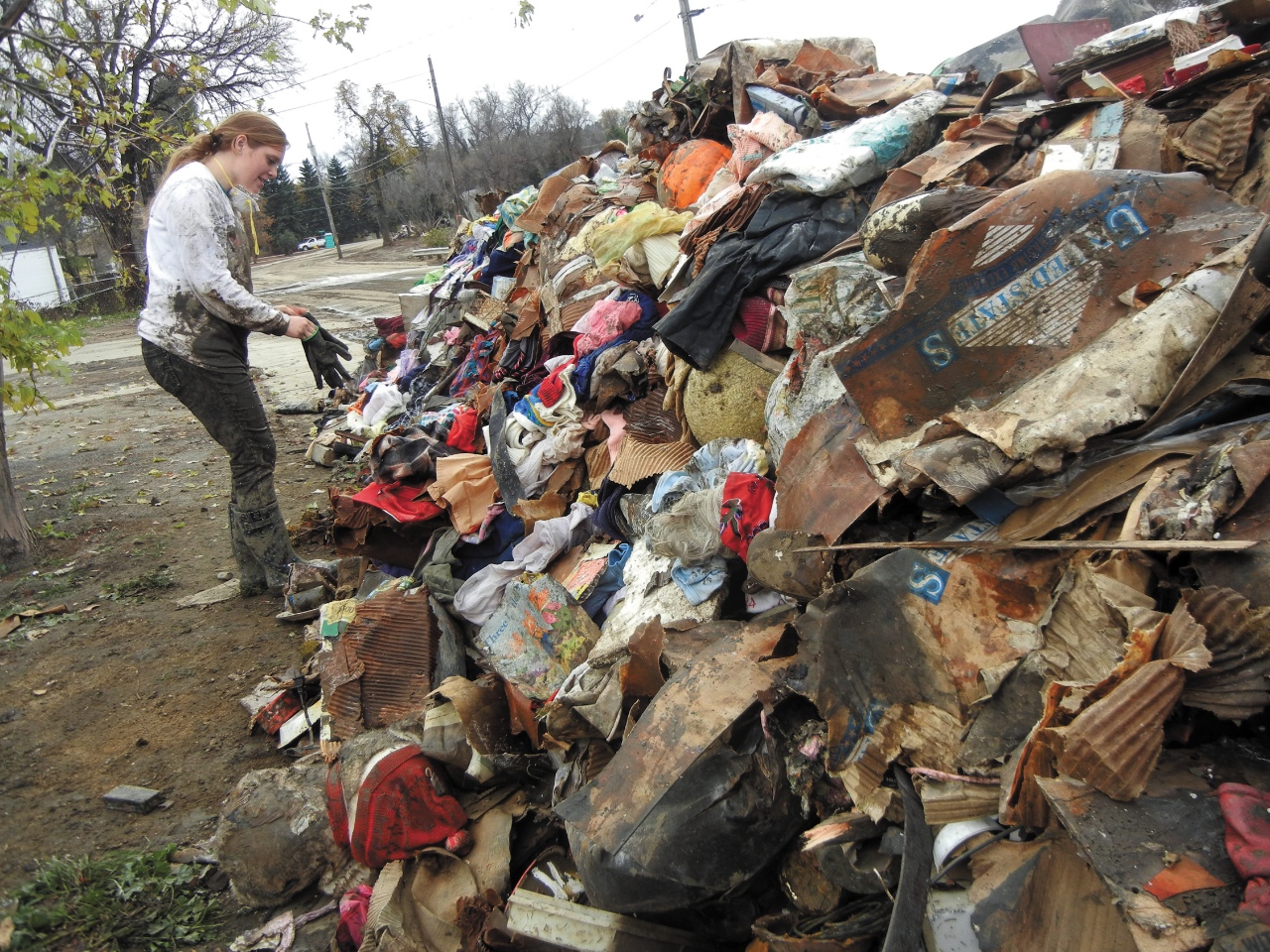 From a distance, it might have been mistaken for a wall of mud. But step closer and hear the hum of the sump pump hose, see the dismal brown yard once covered by green grass, and the contents of the mound become clearer.
Piles of clothing. Ice skates. Car parts. Microwave manuals. A Kum & Go gift card. Plaid, padded armchairs and scattered puzzle pieces. Dry wall and lumber stacked like a toppled Jenga game.
Tossed near the curb into a long mountain, the silt-covered debris are the remnants of a family that once lived at 505 18th Street Southeast, Minot, N.D.
Located directly on the bank of the Souris River, this home was one of more than 4,000 homes destroyed by serious flooding last June after heavy snowfall in Canada caused water levels to exceed holding limits in much of northwestern North Dakota.
Flooding is not a foreign concept for the Concordia College community. Fargo residents are familiar with the devastation and stress that accompanies water that is out of control. And that’s why 12 Cobbers, sponsored by Campus Ministry Commission, spent their mid-semester recess in Minot.

Junior Emily Kimball knew she had signed up to do flood relief work but wasn’t exactly sure what kind.

“We got here, and the whole house, it almost seemed like a ghost town,” Kimball said. “Everything was scattered everywhere. We just started hauling stuff out and tearing walls down.”

Armed with a protective white breathing mask and a hammer, Kimball removed nails from what were walls of the kitchen before the group began their work. The house belonged to a widowed gentleman in his 70s.

“At first, I felt intrusive, like we were going through all his possessions,” Kimball said as she moved a 6-foot ladder between two beams.

Using 10-gallon plastic tubs, the team first hauled loads of soggy garbage out of the two-level house. In an early bucket load, Kimball found a small box of recipe cards. Though mostly smudged and washed out, she could make out the handwritten cursive.
“This is where his kids grew up,” she said, “where he and his wife built a life together.”

Bethany and Briana Johnson, sisters who grew up in Des Lacs, N.D., 30 miles southwest of Minot, hoped CMC would allow a group to do service in their home area. Though their home was unaffected by the floodwaters, their lives weren’t.

“Friends of ours have stuff stored in our garage,” Bethany said. “This has been our whole summer.”

The pair made countless trips up the stairs from the basement carrying clothes from closets and heavier items like a refrigerator and electronic gadgets, items clearly stored by the homeowner for several years.

“It’s humbling,” Bethany said before adding a microwave oven to the heap on the curb.

Many people the girls went to school with are now living in a temporary trailer camp outside Burlington, a Minot suburb, provided by the Federal Emergency Management Agency.
“It’s the new Burlington,” she said.

The willingness of other students to help rebuild her home community encouraged the Johnsons to split their time between helping the Concordia group and spending time at home.

“We really pushed for the Minot trip,” Bethany said. “It’s neat to see people from our school here.”

Chelsi Argabright, a sophomore Fargo native, knew she wanted to spend more time in Minot after her church group did flood relief in July.

When CMC brainstormed ideas for service at the beginning of the year, Argabright mentioned the need in Minot. According to Argabright, campus pastor Tessa Moon-Leiseth connected with Lutheran Relief Services and after Searle Swedlund, associate director of alumni relations, agreed to advise the group, the pieces were in place for the trip to progress.

“I was really moved by it,” Argabright said. “It was devastating for me to think about losing all that stuff.”

Instead of working shifts as a Starbuck’s barista, junior Noah Ford-Dunker signed up for the Minot trip. An easy choice, he said, for two reasons. First, Starbuck’s donates $10 per employee volunteer hour to a charitable cause. And second, home destruction is something he’s had some practice at.

In high school, Ford-Dunker spent time in New Orleans a year and a half after Hurricane Katrina. His service group gutted a home that hadn’t been touched since the roof-high water demolished it.

“It’s a lot like that,” he said, comparing the Minot house to the New Orleans homes as he used a dolly to unload a stack of moldy basement items onto the curbside. The Minot home also had water up to the ceiling for more than a month.

Ford-Dunker is involved with Habitat for Humanity, which will give more students opportunities to rebuild homes during spring break at locations that have not yet been announced.

Gaya Shivega, a freshman from Kenya, joined the Minot crew because she wanted to be useful during mid-semester and avoid sleeping in her dorm. Not the most common response from Cobbers tired from a busy first block.

“I thought this was the only way I could spend my fall break in a productive way,” she said. “It’s good to just come and help someone instead of watching TV or YouTube.”

Argabright encouraged Shivega to sign up for the trip, and she did, even though she had never experienced or seen a flood in her life.

“I felt bad bringing a house down,” she said while looking at the pile of belongings. “It’s hard emotionally, and it’s hard physically, too.”

Another member of the crew, Josue Bogran from Honduras, didn’t want a lazy fall break either.
“It’s better than staying home and doing nothing,” he said.
From a country where 15 percent of the population lives below the poverty line on $1.25 per day, Bogran recognizes the importance of aid from others.

“When there are problems in Honduras,” he said, “United States missionaries are the first ones to come. I knew when I came here I wanted to give back.”

Swedlund, the trip advisor, grew up in Velva – a small town 20 miles southeast of Minot also affected seriously by the flooding. Because the farm he grew up on was also damaged by flood waters, this project especially hit home.

“This is one of the weirdest service projects I’ve ever done,” he said after emerging from the basement, covered shoulders-down in muddy sludge. “There’s nothing left. There’s no face to it. [The homeowner] won’t come by later and say thanks, my life is better now.”

As he filled bins and lugged them outside, he noticed pieces of the man’s life that seemed personal, so real: dance shoes and Girl Scout photo albums. Things that won’t be replaced.
But while the act of gutting a house so it can be boarded up and winterized might seem futile, the Cobbers who spent their fall break in Minot gave a hefty amount of time. For families who couldn’t do the labor themselves, that act of service is worth more than old ballet shoes.
A Lutheran Relief worker told the group before they left that they had accomplished as much work in three days that some groups had in one full week, according to Kimball.

“I felt like there was a little more hope,” Argabright said about her first flood relief work. “It was better than anything else I could have been doing that weekend.”