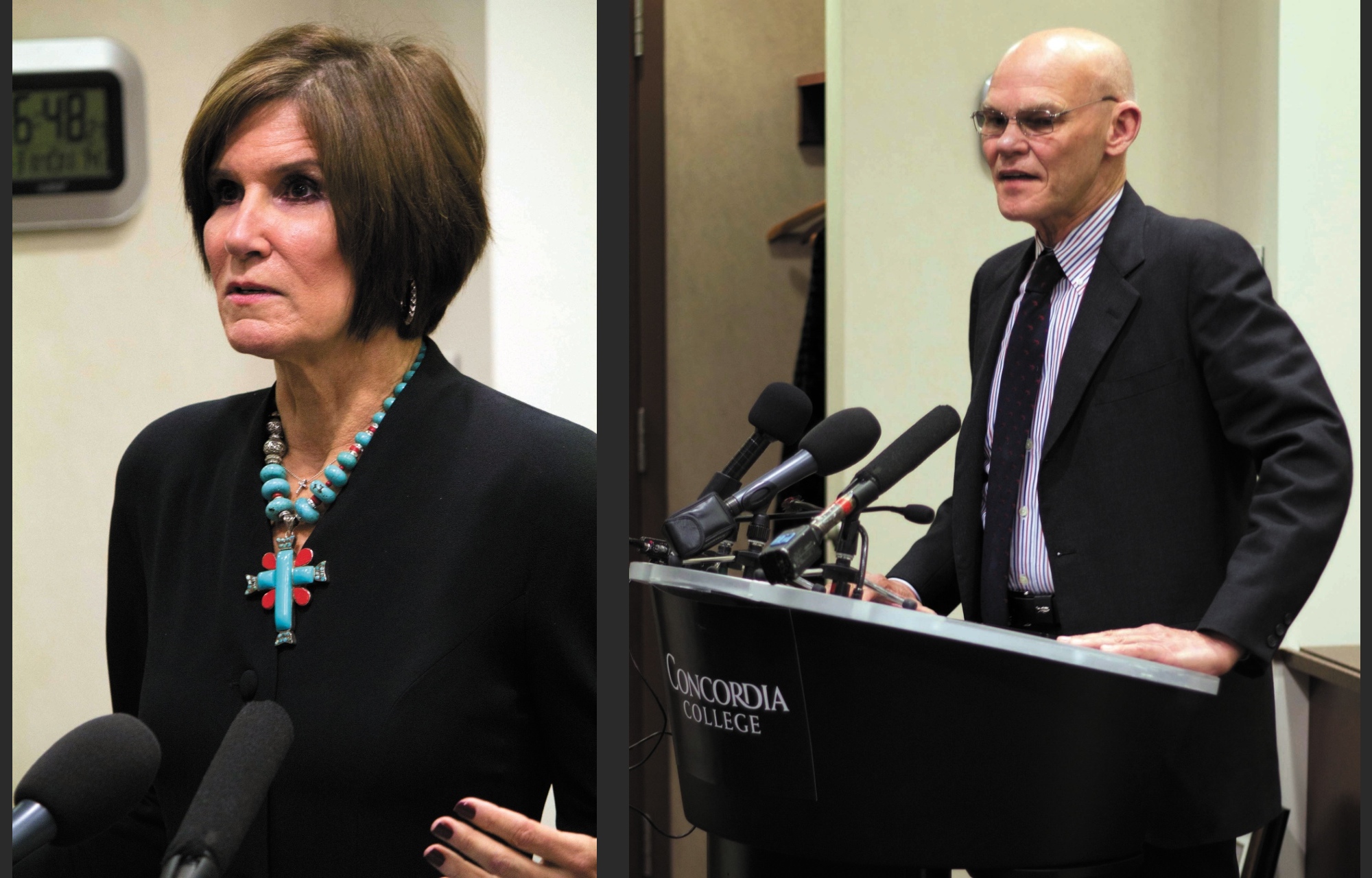 People were lining up outside Concordia College’s atrium doors Halloween night, but it wasn’t for the candy.

James Carville and Mary Matalin werebmediated by radio talk show host and author Scott Hennen while they discussed their opposing political views in the Centrum on Oct. 31. The event proved to be of interest not only to Concordia students but also to the outside community of Fargo-Moorhead as the overflow sites in the atrium and the Maize quickly filled.

Those in the Maize were given a surprise visit when Carville quickly appeared in the doorway and gave a wave as the audience applauded.

“It is possible,” Krejci said, “to disagree politically and then be friends, and even married partners, afterward.”

Krejci was followed by the Student Government Association President Tyler Dugger who gave a warm welcome by mentioning it was the 120th birthday of Concordia College and that the event would make the night “truly outstanding”.

Carville, an adamant democratic, met Matalin, who is an equally obstinate republican, while working under competing campaigns and are still happily married 21 years later. Carville emphasized that their difference in views doesn’t matter as much as people would think.

“I would rather marry a woman who hated my politics rather than my mother,” Carville said.

Along with their political views, they are committed to advocating a respect for those with opposing views. Matalin showed great respect for her husband by talking about his unprivileged upbringing to being a great political advisor.

“He’s the best in his field,” Matalin said. “Sadly he’s on the wrong side.”

They quickly moved on to significant political issues that will play a major role in the upcoming race for the presidency. They touched on issues such as Obama’s likelihood of success for reelection, the current Herman Cain controversy, as well as environmental issues and the ever increasing role of health care and social security in our country.

True to form, Carville considered Obama’s chances of reelection to be, “pretty good considering the conditions he finds himself in,” while Matalin stated that, “Obama doesn’t have a chance.”

Local resident Beverly Woitzel came to hear the speakers, not so much for her political stance, but because of their celebrity status.

“I would say that I’m independent,” Woitzel said. “But I came here pretty open minded.”

Similarly, junior Bjorn Solberg described himself as being politically independent.

“I lean towards the democratic party,” Solberg said.  “But I don’t vote solely on the basis of the party.”

He was also intrigued by the fact that Carville and Matalin are well-known across the nation.

“I heard about them coming through friends,” Solberg said, “and thought it would be interesting to hear. They’re big political people, and I wanted to hear their insight.”

At the end of the debate Carville and Matalin finished by agreeing that, despite the shortcomings our country finds itself in, the future remains a bright one.

“The reason why we’re so optimistic,” Matalin said, “is because we work with young people.”