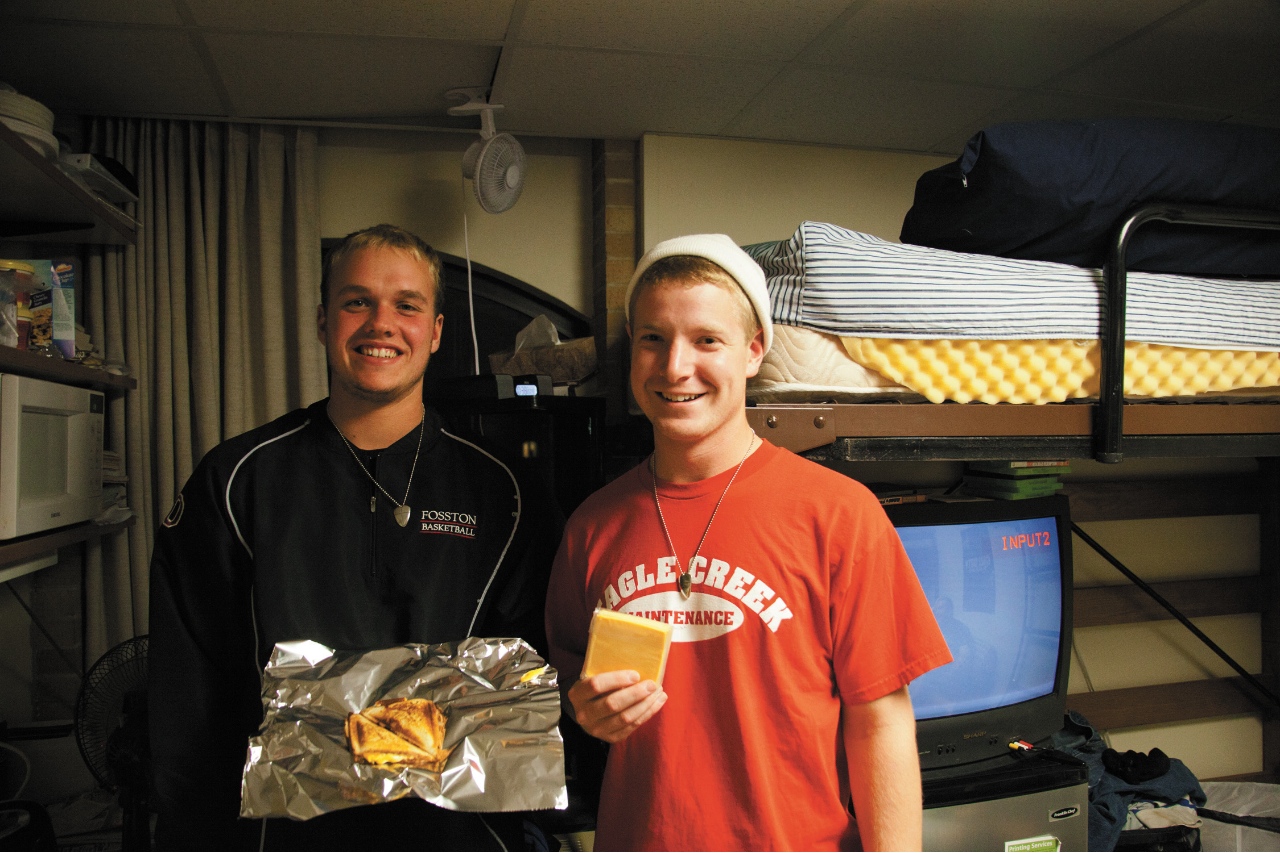 The smell wafts down the hallways of East Complex, enticing anyone nearby to call them up. Stomachs growl as the aroma of melted cheese and butter distracts studying students. As students peak their heads out of their rooms to investigate, they see homemade grilled cheese sandwiches being delivered to their neighbors by two football players.

Freshmen Mitch Fader and Ryan Paulson make and sell grilled cheese sandwiches out of their seventh floor Hallet Hall dorm room. By calling one of them or stopping in their room, one can make their order for as many sandwiches as wanted and wait the three minutes it takes for them to construct “the greatest sandwich on earth,” Paulson said.

“They just go down so easily,” said freshman Cody Peterson, one of the sandwich team’s biggest customers. “I think my lowest order ever was four sandwiches.”

According to Fader and Paulson, their sandwiches are “the best” because they are well-constructed and “made with love,” Paulson said. Each sandwich is made with two slices of Kraft cheese and is made in a sandwich maker that evenly toasts the entire sandwich and scores it down the middle so it is pre-cut.

Fader got the idea from his brother, who started up a similar operation in college at St. John’s University in St. Joseph, Minn. He and his roommate made sandwiches in their apartment and made around $150 each weekend. Fader and Paulson thought that recreating this idea sounded better than getting jobs during football season.

“We were walking through Bed, Bath and Beyond looking for head massagers, and we ended up buying a sandwich maker,” Paulson said. “That was before we had the idea to start selling grilled cheeses. It was meant to be.”

The team sells their sandwiches for $2 per sandwich, $3 for two sandwiches, $5 for 3, with discounts increasing up to nine sandwiches. Typically they operate mostly on weekends, though they say that as long as they are in their room, they are willing to make sandwiches for anyone and deliver to East Complex residents.

“Usually we stay up pretty late,” Paulson said. “If we don’t answer our phone, sometimes people just wake us up.”

Delivering outside of the East Complex area has been discussed, but a decision has not officially been made.

They find that weekends and late in the evening are the busiest times because people are either getting home late or staying up late studying. So far this year, they guess they have sold more than 100 sandwiches.

“College kids often get hungry at odd hours of the night and get hungry at different times,” said sophomore Matt Dymoke, who lives two doors down from Fader and Paulson. “It’s home-style cooking without us having to cook, and it’s a good study break.”

Dymoke, along with many other residents of East Complex, are most often enticed by the smell of the sandwiches either as the team is making them or as they are delivering them.

“The smell gets a lot of people,” Fader said. “It spreads like wildfire.”

The alluring smell also works to their advantage, seeing as it is against residence hall policy to advertise selling goods within the dorms. All of the advertising for their grilled cheese business has been done by word of mouth.

“We will deliver some sandwiches to a room and people will either see it or smell it,” Paulson said. “Then they’ll start ordering them.”

Customers have suggested they expand to including tomato soup or condiments such as ketchup, jelly or syrup, but they plan to “keep it simple” for now, Fader said.