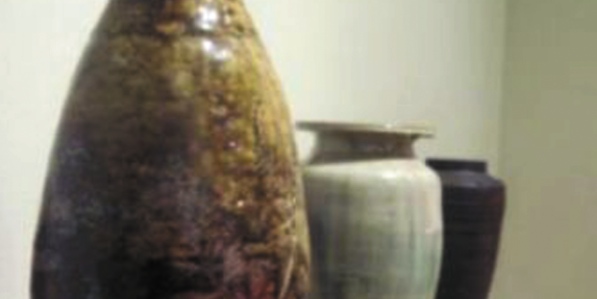 Stepping out of the world of concrete and electric circuits and into the Rourke Art Gallery’s most recent exhibit, “Stoked: Five Artists of Fire and Clay” reminds the viewer of the human connection to nature and to the soil. The five artists represented, master potter Richard Bresnahan and four of his former apprentices, are connected by a style that recalls the earth from which their pieces were crafted but also demonstrates the creative imaginations of each potter.

The human form is a common motif among the sculptural pieces of this collection, particularly in the art of Anne Meyer, an artist out of Saint Joseph, Minn. Her casts of bodies and faces are often heavily detailed with carvings that recall scarification.

Connections between humans and nature are also reflected in Meyer’s work, notably Woman in Shell and Mother Moon. The human form is celebrated for its naturalness; it is naked and unapologetic in the way it is shown to curve, wrinkle and bend, but it is a beautiful surprise to those who hold onto commercialized ideas of perfect bodies.

Stephen Earp’s work in the show was also particularly engrossing. A potter out of Massachusetts, Earp uses local clay that he digs himself and works in the style of the early settlers of that region. His work is reminiscent of German and Pennsylvania Dutch folk art, its traditional style juxtaposed with elaborate sculptural and glazing detail.

Earp’s pottery is also delightfully wise with proverbs and sayings glazed in calligraphy across many of the pieces. The only way to really sum up his style is “clever.” The simplicity of the old Western European motifs seems familiar and comfortable at first glance, but upon closer examination, the viewer finds herself challenged by the questions the art provokes.

At every turn, I found the work in “Stoked” blurring the line between the sculptural and the functional. As someone who has worked in clay before, I felt I had almost become jaded to functional pottery. Throughout high school, I made so many bowls and vases that my mom had trouble finding enough shelf space for them and enough fruit or flowers to fill them. The functional pieces in “Stoked,” however, reminded me that pottery can serve a purpose but still retain enough purely artistic quality to be displayed alone.

The tea pots in this collection fit especially well into this category of functional art, as did my favorite piece from the collection, a set of leaf-shaped platters.

When attending this exhibit, keep an eye out for intricacies in the glazing on the pieces. The type of wood-firing used on many of the works takes several weeks to complete, creates interesting patterns in the glaze and leaves ghostly shadows where the fires of the kiln had once burned across the clay. A video playing in the backroom at the gallery shows the process used and gives the viewer an appreciation for the work and dedication that goes into completing these beautiful ceramic pieces.

“Stoked” a wonderful example of the variety and range that ceramic art can take. The quantity of work is enough to get through in under an hour, but the quality is enough to keep one busy for a whole afternoon. The exhibit will be up in the Rourke’s first floor gallery until January 8th and is open Friday, Saturday, and Sunday from 1 to 5 p.m.