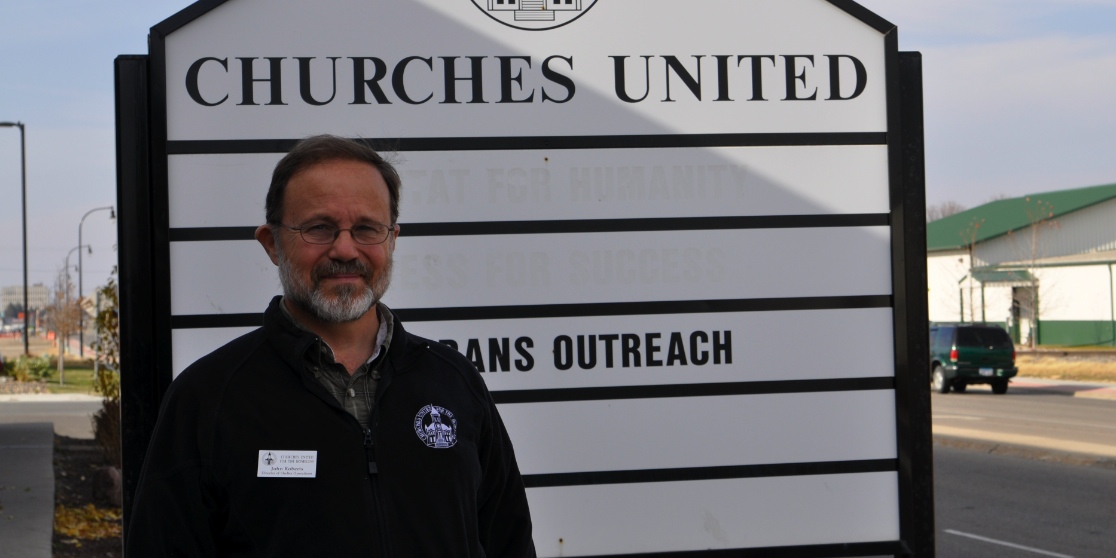 He totes a big, blue canvas bag filled with a construction uniform donated by a pastor, hand warmers and the rest of his belongings over to the bus stop by Churches United for the Homeless. He calls himself Milo and is heading off to North Dakota in hopes of finding work at the oil rigs.

If all goes as planned, by now Milo will already have caught his 6 a.m. bus Sunday morning and finished a few days of work. He is one of the many jobless, homeless men and women for whom North Dakota has become the Promised Land. According to John Roberts, director of shelter operations at Churches United for the Homeless in Moorhead, news of employment opporunities at the oil rigs is compelling more and more people affected by the current economic crisis to start trekking north. This mass migration, coupled with skyrocketing living costs and home losses in Minot, resulted in a drastic increase in homeless men, women and children within the Fargo-Moorhead area, Roberts said.

“People are coming from everywhere,” Roberts said.  “Just this morning I ate breakfast with a man from Baltimore, Maryland.  But the problem is a lot of people only get as far as Fargo-Moorhead; then they run out of money.”

Sixty-five families are currently sleeping in cars and tents in the F-M area because they lack affordable housing, according to the Point in Time survey done in July in which volunteers went to parking lots, riverside shelters, and other sites. At the Churches United facility on Nov. 6, a family called in hopes of a warm place to spend the night.  All the rooms were full.

Tarsi Potete, a shelter advocate at Churches United, said that giving this news to anyone, especially those with children, is the hardest part of her job.

“To look in people’s faces everyday and tell them we don’t have room, especially when it’s winter and you know that it’s freezing out, that’s rough” she said.

This year more men, women and families are going to face hearing those words than ever before. Apart from families, a January Point in Time survey showed there are 406 homeless people living unsheltered in the area, 79 of which are children under 18 years of age.  There are 330 emergency beds in various shelters, and this includes the overflow beds, mattresses temporarily squeezed into any space available such as dining rooms or the Churches United chapel room floor.  This means that all the shelters combined are still short at least 75 beds.  This need prompted Roberts to post a plea on Facebook asking, “Who will step up and give shelter to those without shelter when the temperatures hit subzero or we are in a blizzard warning?”

“The issue here is space, so folks don’t freeze,” Roberts said. “It has happened that you hear local news of a homeless person who has frozen to death.  How can we allow that to happen?”

One of many who are working to solve this situation is Lois Ustanko, the Director of Faith Community Nursing & Health Ministry from Sanford Medical Center.

She recently attended a meeting with 70 members from local churches where she brought awareness to the urgency of the issue as well as requested the possibility of having churches offer temporary emergency shelter during blizzard warnings. So far, she has heard back from two churches expressing interest in possibly becoming temporary shelters.

“We looked to the city to ask ‘do you have any plan?’, and they said they didn’t,” Ustanko said.  “Now we have turned to the churches to ask what they have to offer.”

“The committee is going very well,” Ustanko said.  “Now it’s just a matter of looking outside the shelters, because they’re full. Of course, we are bumping up against time constraints because winter is upon us.”

As temperatures continue to drop, Ustanko and local shelters, as well as other groups such as the Fargo-Moorhead Coalition for Homeless Persons, seek to find immediate answers. However Ustanko identified the real issue as finding out why someone is homeless and helping them better their situation.

“You want to do more than be a band-aid,” she said. “You want to get down to the real sore.”

With this goal in mind, the Fargo-Moorhead Coalition has organized an educational conference with Linda Kaufman from 100,000 Homes Campaign titled “Moving Forward: On the Road to Ending Homelessness” which will take place on Nov. 17 and 18 at the Fargodome.

Roberts expressed his confidence that the work Ustanko and the Coalition are doing will raise interest.  However, he explained that many facilities have reservations about opening their doors to become shelters.

“They imagine the worst, but the worst doesn’t happen,” he said.  “These are people like you and me who just had a turn of bad luck.”

Potete, who has been a shelter advocate for over a year while simultaneously opening a nighttime daycare, running a hair salon and raising three children, added that part of the problem is negative treatment by community toward those without homes.

“It’s a fear of the reality, knowing it could possibly be you, and you start to live in a constant state of denial,” she said.  “You don’t see the problem, so it’s not there.”

She speaks from experience.

“I’ve been homeless, and I want to treat people how I wish I was treated,” she said.  “If I would have received a smile when I was homeless, it would’ve gone a long way.”

Working at Churches United is one way that Patete brings hope to the homeless by encouraging each resident to continue to the next step.

Adam Gunderson, a junior at North Dakota State University, stumbled into his job as shelter advocate through a friend a year ago.  Now he claims it’s the first time he enjoys going to work.

“You’re here making a difference, and it’s really rewarding,” he said. “And it really puts things in perspective.  It could be you one day.”

Both Patete and Gunderson also have hope for solving the current space issue, because this year they have a more structured system.  However, much of the solution to the problem lies in the hope that the community will be aware and responsive to the situation.

“This place could not exist without volunteers,” Roberts said.  “And it’s always nice to see young people here.”

Volunteering is an opportunity to change lives, as Patete, Gunderson, and Roberts all testified to.

“I once overheard a resident say, ‘This place changes people for the better,’” Roberts said. “That’s what we hope to do.”

As Milo stared down the road waiting for the bus that would take him to the next step in his life, he too expressed his gratitude at the kindness of those who open their hearts and their homes.

“There are some evil people out there,” he said.  “But it’s nice to know there are kind people too.”