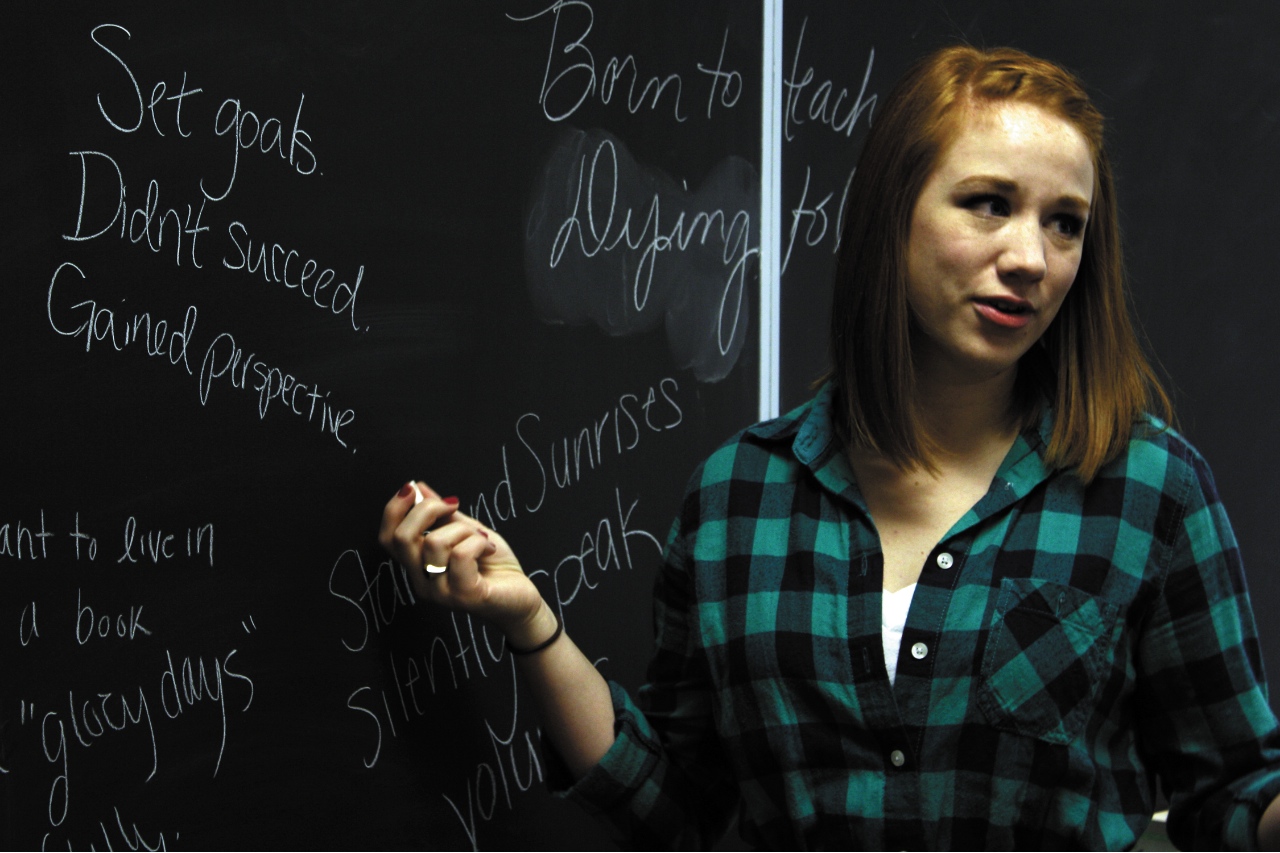 She meant it to be brief.

Joan Kopperud’s unit on six-word memoirs, that is. This semester in her English 421 course titled “Traditions in Literary Genre – the Memoir,” Kopperud, a professor of English, put the six-word memoir on her syllabus as a one-day topic.

But the class of 11, made up of students from different disciplines, found this literary form worthy of more class time than they had originally planned.

Now, starting Monday, Nov. 8, the class will host a table in the Atrium where the campus community can stop to write their own life stories. In six words or less.

Jennifer Bevington, a senior English writing major, said the class was required to read just 10 short memoirs before a class period in October. But apparently, they could not stop.

The brief snippets of life put into a six-word structure are addicting to read, according to Bevington. Her classmates came back to class energized by the best six-word memoirs they had read and wanted to share their favorites.

Then they starting writing their own.

Memoir-writing is growing in popularity, according to Kopperud. She has noticed several memoirs on the best-seller lists in the last year, which made her decide last spring to focus an entire course on memoirs.

“It’s making its way into English,” Kopperud said. “People are interested in and reading memoirs.”

Defining memoir is a challenge, in Kopperud’s opinion. By common definition, it is a form of creative non-fiction that is more focused on a snapshot of someone’s life than an autobiography, which is a broader look at someone’s entire lifetime.

Made popular by SMITH magazine, an online story-telling site, the six-word form follows the example of novelist Ernest Hemingway. He was allegedly challenged to write a short story in only six words, and came up with this: “For sale: baby shoes, never worn.”

Lauren Fields, a senior psychology major, is particularly interested in the way the genre of memoir challenges memory.
“Memory itself is so difficult to pinpoint,” she said. “It’s how we experience life and remember it. There are obvious problems with how we recall our memories and how accurate they are.”

Fields wrote her six-word memoir based not on one specific moment but on a feeling she had at church camp: “Stars and sunsets silently speak volumes.”

“When I’m stressed out or frustrated, I go outside, and when I’m in nature, I feel most calm,” she said. “It centers me.”

A certain mental challenge accompanies the six-word memoir, Kopperud said, but that shouldn’t scare people away from writing them. The students at the table next week will advise those who stop to choose the right words and put them in the right order. A large piece of paper will be provided for everyone to compile their memoirs, and the class has discussed letting people submit memoirs that are particularly intriguing.

The table, said Kopperud, was the class’ idea.

“I thought it was going to be a small part of one class period,” she said. “But it became this big thing.”

Fields wants those who stop by the table to know the importance of treating the six words as a memoir, not just a phrase.

“What I hope the campus gets from this is: memoir is more than just writing about your life,” she said. “It doesn’t have to be a very intricate process; [six-word memoirs] still have the same responsibility for truthfulness that makes them so powerful.”

“It’s an interesting idea to boil your life down in just six words,” he said. “It’s not always as difficult as writing a masterpiece but can be equally profound.”

Bertram’s own six-word memoir was born because while growing up, his family changed location often since his father was in the Army. It reads: “We’re moving again? I’m not surprised.”

One of his favorites from the class’ reading was full of intrigue: “He knew about her peanut allergy.”

Bertram, who hopes to teach literature in the future, values the six-word memoir as a way to tell stories that makes people want to read. “[They show] that there is an outlet in literature for everyone,” he said. “Literature isn’t just the stuff you learn in high school. It’s very fun, and it’s constantly changing, and it’s being written every day.”

Now, they ask, what’s your memoir?

Do you have your own six-word memoir to share? Send it in to The Concordian and we’ll print it in the next issue.