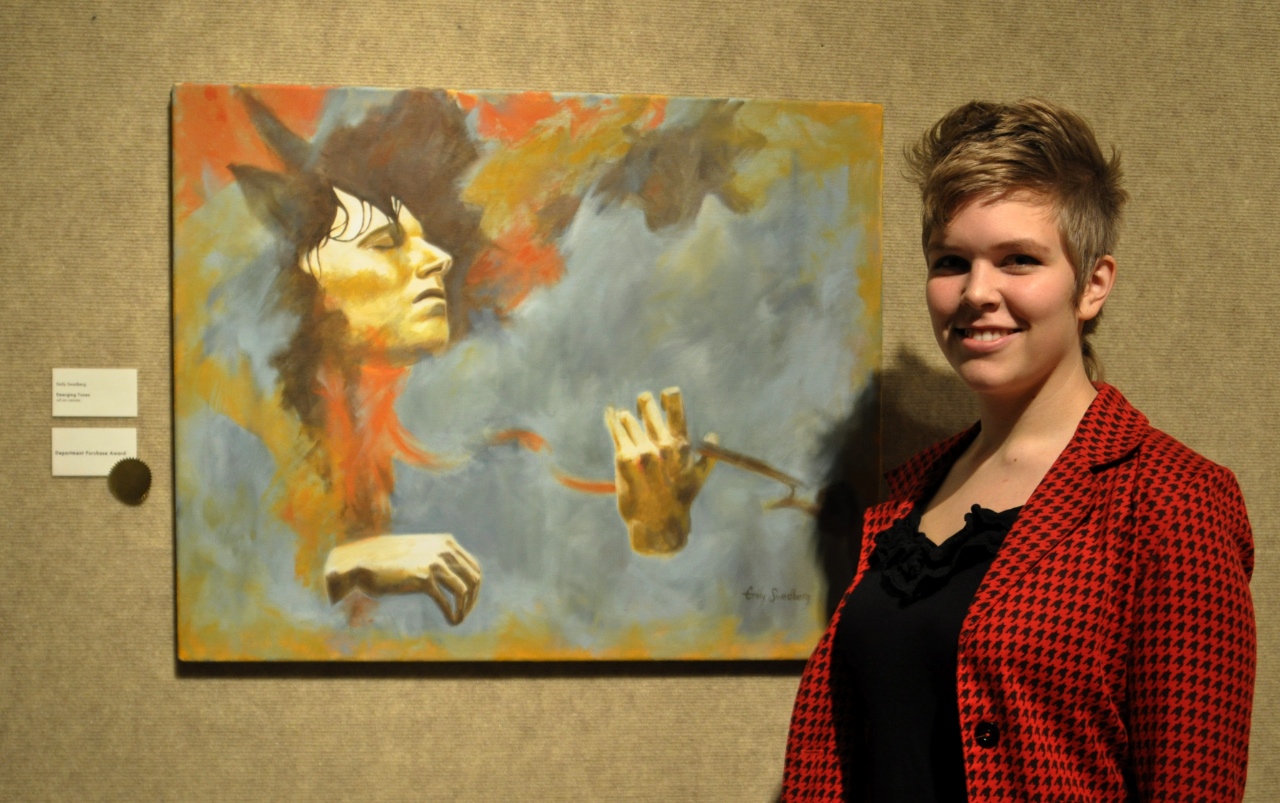 Many art fans were mingling outside the Concordia Cyrus M. Running Gallery on Nov. 8 and nibbling on the spread of cheeses, cookies and punch provided for the special occasion. At four o’clock, the gallery opened for the reception of the Annual Juried Student Exhibition, which offers a wide range of talent from Concordia’s budding artists.

Anyone can enter this annual show, as long as they attend Concordia and the work was made in the past year in a Concordia art program. Each year there are around 100 to 120 submissions, and the juror chooses about 40 to 50 pieces for the show. This exhibition also offers participants the chance to win one of three different prizes with five total artists chosen for the awards.

Three submitters will receive Merit Awards and gift certificates to Art Materials, an art supply store, to further their artistic endeavors. These three awards are decided by the juror. The Patron Purchase Award is chosen by a local couple in the Fargo-Moorhead area who have been buying a student piece every year from the show for the past twenty years.

The final, and possibly most revered, prize is the Department Purchase Award. The winning piece for this award is picked by the art faculty and purchased by Concordia to be displayed on campus.

Heather Hardester, the curator of the gallery and an art history professor at Concordia, said that the show’s diverse mix of artwork was acquired by “word of mouth,” though art professors will frequently seek out works they felt were particularly strong.

“I think it’s a great opportunity to see what kinds of things go on in the art classes here at Concordia,” Hardester said. “Because it’s open to freshman through seniors, I think it’s interesting to see certain students grow every year in their creativity and style.”

Hardester was also in charge of choosing this year’s juror, Dwight Mickelson. Mickelson is a Moorhead freelance artist and Concordia alumnus. Hardester called Mickelson a “Renaissance man” because he dabbles in sculpting, metalworking and furniture making.

“I enjoyed the show,” Mickelson said. “I thought that there was a nice maturity. It was a difficult show to judge because there was such a variety of media and styles.”

Mickelson judged the show based on four things: consistency, something that’s evocative or evokes an “emotional response,” economy and the artwork’s ability to stand on its own.

“Not all art has to do this, but I had to narrow it down to some criteria,” Mickelson explained. “This show was whittled down from a larger collection; I like all the pieces that are in here. It’s not like I really like these three and not all the rest. I really like all of them. I think it’s a great experience for students to see their work in the gallery with the light on it to give it its own special space.”

At five o’clock, the winners were announced after most of the audience had a chance to walk through the gallery and admire the students’ pieces. The Patron Purchase Award was given to Lewis Engel for his clay sculpture titled “Modern Dogu.” The three Merit awards went to Jeanett Birkeland for her photo “Red Sky,” Emily Marsolek for her acrylic painting “Curiosity” and Erika Sutor for her wire sculpture “Grenouille.” The Art department decided to purchase “Emerging Tones,” an oil painting by senior Emily Swedberg.

“I didn’t expect it,” Swedberg admitted after receiving the Department Purchase Award. “It’s nice to have some affirmation about my work. Sometimes I feel discouraged that my work is out there or weird, but it’s good to sometimes get recognition.”

All of the work in the gallery illustrated Concordia’s range in the field of art. Mixed media, plaster, wire, ceramics, prints, sculptures and many other mediums were displayed in the gallery because the juror felt they deserved that “special space” for their skill.

“There’s a lot of diversity in unexpected work that’s very fresh,” Swedberg said. “I always look forward to student shows, so I hope people continue to submit even if they aren’t art majors.”

The viewers didn’t abandon the show after the winners were announced; many stayed behind to admire all of the pieces and discuss them with fellow art lovers and friends. One viewer was sophomore Renee Tostengard, who came to support her friend, who had a piece in the show.

“I think it’s amazing how people can take emotions and feelings and turn them into something physical,” Tostengard said. “It’s kind of like a potluck dinner: everybody brings their best or the best is chosen for the exhibit, so it’s a sampling of all the individuals.”

The exhibition is still open for viewing at the Cyrus M. Running Gallery, located in the skyway between Olin and the Francis Frazier Comstock Theatre buildings at Concordia, until Dec. 11.