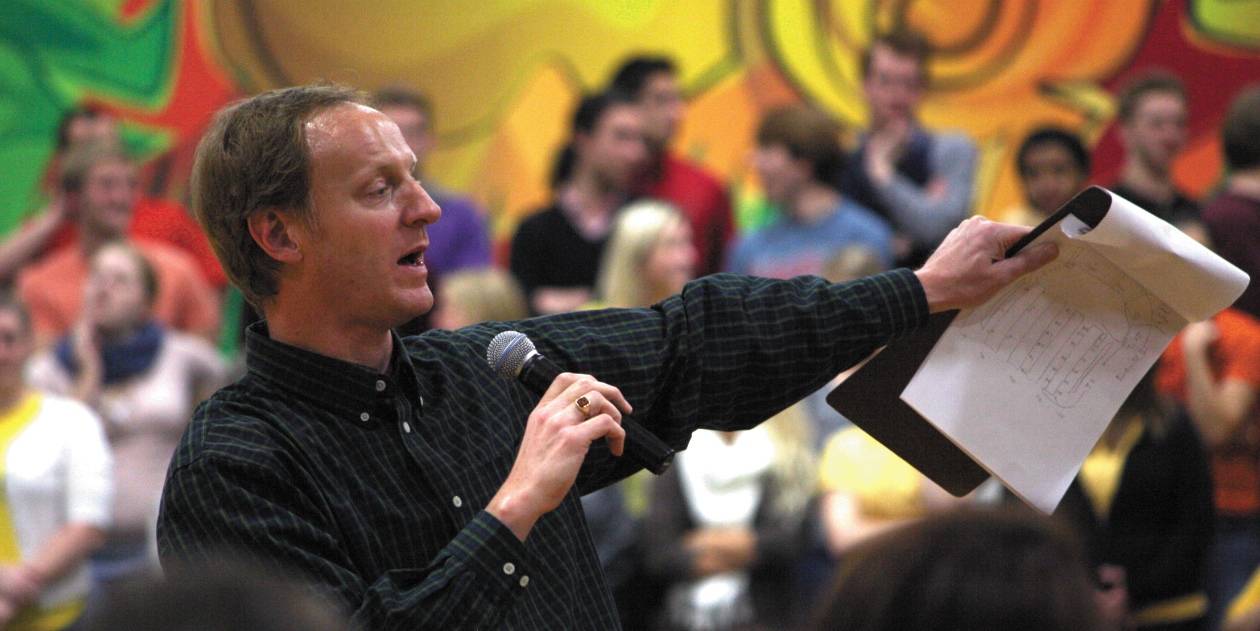 Memorial Auditorium is filled with college musicians as they rehearse for the 2011 Concordia College Christmas Concerts. The opening song begins with four choirs surrounding the crowd. On the second song, their cue comes, and they rush to the risers on stage.

Gordon Moe runs to Männerchor and snaps his fingers at the leader to walk faster. He sees that the women’s choirs are backed up on the stairwell, so he charges to the other side of the auditorium and pounds on the stage. The singers miss their mark this time, but if Moe has his way, the transition will be perfect by opening night.

This year’s Christmas concert, “Today Heaven Sings,” begins today and runs until Dec. 4. Moe’s work can be seen throughout the production.

As manager of choral ensembles, Moe handles the nonmusical logistics of the Christmas concerts. Everything from staging and lighting to ticketing and promotion fall under his supervision.

“I do everything except the music,” Moe said. “I make sure everyone is following the same script.”

Senior Jen Hurd has worked for Moe in some capacity since her freshman year. She describes him as energetic with a laser focus. His supply of coffee and Diet Mountain Dew sometimes makes it difficult for Hurd to catch up.

“[Moe] is an idea man,” Clausen said. “There’s a lot of creative energy behind him.”

During mass rehearsals, Moe carries a clipboard with arrows and numbers that only he can decipher, Hurd said. Catch phrases, snapping and pounding the stage are regular occurrences. Hurd recalled that one year his words of wisdom were to “move as sharp as bunnies.”

“It intimidates a lot of freshman because they don’t know Gordon,” Hurd said.

This year  the underlying theme is joy, Clausen said. The beginning piece, which Clausen wrote, is about the creation story. Four choirs surround the audience and twirl colorful ribbons. Hurd said the ribbons were a last minute idea.

Along the theme of joy is a calypso–style piece that features two steel drums, all five choirs and the orchestra.

Some parts of the Christmas concert never change. Moe’s favorite moment, whether as a member of the choir or the manager backstage, occurs when the audience rises to join the choirs in song. A wave of bodies rises and engulfs the auditorium.

“It’s this mass of humanity… [that] stands over the whole auditorium, and they burst into singing a Christmas carol,” Moe said. “It’s pretty awesome.”

This year Moe will complete his 15th Christmas concert season as choral manager for Concordia. Each season is an ongoing affair.

“Christmas is year round,” Moe said. “We finish up a season of Christmas concerts, and we take notes on how we can improve it for the next year.”

By early summer, the creative forces meet to discuss themes for the next concert and collaborate on both the musical and visual expression of that theme.

Despite the heavy commitment during the Christmas season, Moe enjoys the job.

“I enjoy working around the energy of students,” Moe said. “I find college students to be energizing, optimistic,  [and] funny.”

I am a senior print journalism and global studies major. My passion for journalism stems from a desire to bring the world to the reader. I train actively in Brazilian Jiu-Jitsu and Muay Thai boxing. I live on coffee and Diet Coke. On a beautiful day, you might find me riding my motorcycle around town.