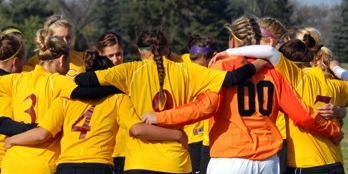 The Cobber Women’s soccer team continued their reign as one of the top programs in the country by making another visit to the Sweet 16 at the Division III national tournament.

This was the team’s second trip to the big dance in three seasons and fifth in the past six seasons. The team lost in the MIAC playoff final to St. Ben’s but was given an at-large bid to the tournament.

The team’s first two games at nationals were played in California. They beat Puget Sound in penalty kicks in the first round and beat Santa Cruz in overtime in the second.

“I thought it [nationals] went really well,” senior captain and all-conference player Kelsey Swagger said. “Overall though, I thought we played [well]. I think that maybe the best we’ve played all year was [in] the first two rounds.”

The team traveled to Ithaca, N.Y. for their Sweet 16 game. The third-ranked team in the country, Trinity, was in their portion of the bracket and might have been a giant road block if the Cobbers made the Elite 8. Trinity had an undefeated record of 20-0-0 coming into nationals. Amazingly, they were upset by Ithaca, who was playing essentially a home game. The quarterfinals and even the Final Four looked reachable for the Cobbers.

In their way was a SUNY Cortland team who had already upset two arguably better teams on their way to the Sixteen.

“I felt like we were evenly matched with SUNY Cortland team, and the game could have gone either way,” Co-MIAC Player of the Year, Sarah Rounds said. “I felt like it kind of came down to that it’s hard to come out and play well every single game, and that’s what you have to do at nationals. We played well for the Puget Sound game and the Santa Cruz game, so I guess it’s hard to keep going and keep playing well.”

In a hard-fought game, the women lost to SUNY Cortland 2-0, putting an abrupt end to the women’s season.

“It was hard to lose in that last game, especially because with Trinity losing to the other team, it felt kind of like the gates were open for us to go to the Elite Eight and the Final Four,” Rounds said.

Even more impressive about the Cobber’s run at nationals was how seamlessly the team replaced a very talented senior class from last year with four freshman starters and made returning to the NCAA look so easy.

“The season went very good, obviously, [judging] by how far we got,” sophomore all-conference winger Gina Weiss said. “It was mostly good… it was so surprising that we were able to pull that together-with the amount of starters we lost.”

Coming into the season, the team wasn’t quite sure what to expect. Bringing in so many new faces and a new group of captains is challenging for any team.

“You never really want to look at a year as a rebuilding year, but if there was going to be one, I kind of assumed this one would be it,” Rounds said. “So going into the season, I didn’t really expect us to do as well and have so many talented freshmen. But, it was a real surprise to have them step up and be able to play so well so quickly.”

Looking back, the early season contests showed that the team had the talent to win games. In the first two games of the season, the team went down early to perennial regional contenders Luther and Wartburg and came back to get good results-a win and a tie, respectively.

“The first couple of games, actual games, were good indications,” Weiss said of how skilled the team looked. “The freshman started scoring and making big differences, and then it all started to come together. The way we worked together and were able to score goals from, like, all different kinds of plays and spots.”

The surprise at how the team did was also expressed by Swagger.

“We were kind of nervous for this year, since we lost so many of the seniors last year,” she said. “I was really impressed with our freshman this year just stepping up to the plate. They were a big contributor to us getting to the Sweet 16. I didn’t think we would be terrible, but I didn’t see us as going to the Sweet 16 again.”

“I think we can definitely go as far as we did this year, and if not much farther, just because we have such a strong base to build off of,” Weiss said concerning the team. “Anything we add to it or any players we add to it are just icing on the cake”

The talent and experience is certainly there for another good season.

“I think one of our major goals [next season] is going to be to run the MIAC again, because we haven’t really done that in the past couple years,” Rounds said.  “Win a MIAC championship, and then win a MIAC playoff championship; that’d be fun.”