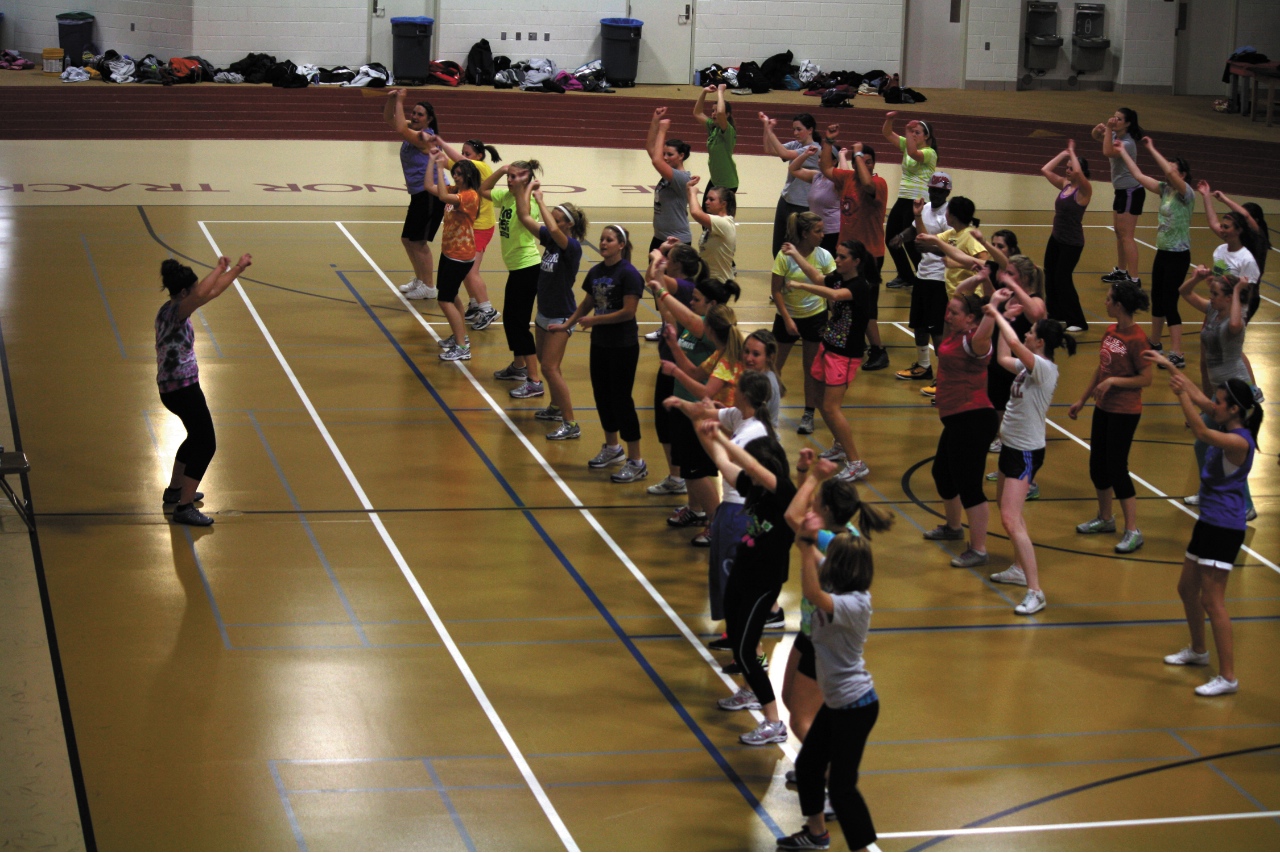 Zumba, a Latin inspired form of exercise, has many students around campus setting down their books and homework to dance.

Sophomore Alexa Bateman began instructing classes last year for eight to 20 of her friends in the Park Region lounge. This year, Bateman and Spanish professor Amy Ashbaugh made Zumba for all Concordia students a reality. Classes are held Tuesdays at 7:15 p.m. and Wednesdays at 9:15 p.m

“It’s a great way to get in shape fast,” Ashbaugh said.

She was first introduced to this form of exercise in California. Now she says people in the Midwest are catching on.

Bateman started dancing in the 8th grade but had to give it up due to conflicts with varsity sports. However, she was able to continue it through Zumba at the YMCA in Grand Forks.

Zumba first started 25 years ago in Columbia when Alberto “Beto” Perez forgot the normal music tapes for the aerobics class he taught. Instead he improvised with the tapes he had, which consisted of salsa and merengue music.

Zumba is a workout based on intervals, so the songs alternate between fast and slow. About 70% of the music during the workout is Latin and the other 30% is pop music. Dancers can burn up to 700 calories during the hour-long workout.

Sophomore Paula Haeder has been attending sessions since mid-October.

“I’m shocked sometimes how difficult it is,” Haeder said. “We’re all sweating. You can feel it the next day.”

She also appreciates that the classes are at a convenient time of night, and she doesn’t feel tired out when the class is done. Instead she feels energized to do homework.

Instructors of Zumba use the official choreography they learned from other gyms or disks from the Zumba company. Brevik has also made six choreographies of her own.

“I think that people have a lot of fun,” Bateman said. “It’s a fun way to exercise together and just let loose.”

The class has grown since it started this year.

“There’s been about 40 to 80 people coming every night,” Bateman said.

However, this has presented a problem for the class. Currently, the sessions are held in a section of Olson Forum. When that many people come, it’s tough for the people in the back to see the instructor and copy the moves Brevik explained. Instructors are looking to borrow a stage to solve this problem. They also wish to buy new sound equipment, because right now they are borrowing a stereo.

Bateman said she wants to get an official Zumba club started by February or March next year. This will allow the club to apply for funds.

Classes are available at many other gyms in the area including Curves, Elements and the YMCA. Classes include Zumba gold for the elderly, Zumba tonic for kids and Zumba aqua for water aerobics.

She urged people not to feel intimidated and to come with a friend.