Importance of heart and mind 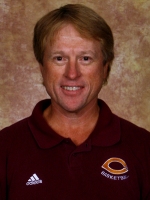 Concordian sports writer Patrick Rundlett had the opportunity to sit down and interview men’s basketball coach Mr. Rich Glas. Here are his responses.

First, being at the start of the season, what are your thoughts so far?

Coach Glas: “We’re struggling from a stand point offensively shooting the basketball. That’s been our biggest problem. We’re 2-3 right now, and we had a good start against UM Morris. We played well on both ends of the court. But we’ve gone on the road since, and Moorhead State was a tough one. They shot the lights out on us, and we actually played pretty well the first half and stayed in it, but then we went down for Thanksgiving and just didn’t shoot the ball well and lost two ball games. [We] went to Macalester [and] grinded out a win, but again just shot 31% or whatever. It’s just hard to win when you’re shooting that kind of percentage.”

So obviously you lost a very strong core group of players this last year to graduation. What is it like as a coaching staff and a team to lose a group like that?

Glas: “It’s kind of like starting all over again. There are a lot of guys who just have to learn our system, [like] our way of doing things from a defensive standpoint: how do we handle screens, how to do this, how to do that. Instead of having it being just reactionary, they’re still kind of thinking about it. But overall, I’d say defensively they’ve caught on pretty well and we’ve been okay defensively. It’s just offensively, to learn the plays we run through, we run out of different sets into our motion game and the sets that are certain things we’re looking for…so little nuanced things that still have to be learned in our offense. And hopefully once that becomes more automatic, maybe our shooting will improve as well. But the big thing is we have to be able to shoot the ball at a better percentage than what we’re shooting right now…We need to be shooting 46%, 47%, 48% overall, and from [the] three point range we need to be up at 38%, 39%, 40% range to take advantage of the three point line. Otherwise if we’re shooting below 33% we aren’t getting anything out of it.”

As a coaching staff, were you expecting this year to be sort of a transition year?

Glas: “We expect that when you have a lot of new faces. You’re going to go through growing pains, and that goes with the territory. But I still think we have the capabilities to have a competitive basketball team. We’ve been competitive, but are we competitive enough to get to the top tier of the MIAC schools? That’s what our goal is: we want to consistently be in the top six teams to get into playoffs, and that remains to be seen. We’re going to have to get better this year if we’re going to get to that goal. We have to start shooting the ball better to give ourselves a good opportunity to win games.”

From the make-up of the team and what you’ve seen in games so far,  can the team, with some time, get to that level?

Glas: “They’re certainly capable. There’s a pretty fine line between winning and losing at any level. There are teams that have that fight in them, no fear. We call it the heart and the mind. You just got to go out there and focus and compete, and if we play with a sense of self-expectancy, that confidence, you can go win a lot of games.  They’ve [beaten] teams that may have more skill level, but lack the drive, that fight, that intangible heart and mind. So our key is, yeah, we may not have the experience or maybe quite the skill level because of our lack of experience, but that doesn’t mean we have to lack in those other two areas.  You got to have that heart and that mind, that competitiveness, that focus and really do the best we can. And if they do that for every possession, you certainly enhance your chances of winning games.”

Over the course of your career, you’ve seen a lot of different teams come in and out. Are there things or principles you try to establish?

Glas:  “That’s my formula to success I call it. It’s all about your attitude, and the base of your attitude is your heart and your mind. Those are the intangible ingredients that take your skill to a level that you’ll be able to succeed at the highest level that God’s given you. But if you don’t compete, if you don’t have that physical toughness in your heart to want to go compete, then it’s easy to slide off. If you don’t have it in your mind, the mental toughness to be able to focus, you get distracted by things that deteriorate your ability to play as well, and your skill level drops, and that’s the way you take it, and you’re not as good. The very first day I met my first basketball team, that’s what I preach. It’s the heart and the mind [that are] really key.”

With a young group like this, is it more difficult to get people on the same page with that sort of mindset?

“I think they buy into it. It takes time to gain that sense of self-expectancy. When you go through things, [think] ‘oh you can do this type of thing’ instead of being a little fearful of what’s going to happen [and] going in and attacking the game. That’s what I try to get across to them…just go play. It doesn’t make any difference who you’re playing; just go play. It’s not like you’re in some fox hole in Afghanistan. You’re not getting your leg blown off tonight. That ain’t going to happen; we’re just going to go play a game, so let’s just go play. Just trying to get them to compete, have fun playing. The fun times when you execute and you’re focused in and you play well and you win a game. It’s always [a] challenge trying to get teams to that point where they can have that high level of self-expectancy and mental toughness to focus in and do things to the best of their ability and to go compete.  So there’s a passion for what they do. You’re never going to be successful in your life if you don’t have a passion for something.  Otherwise it’s just, ‘eh, no big deal’.  But if you have a passion for something, and want to become this and you work for it, that’s what we have to do.  If you have that passion, and you can focus in on what you need to do to get there instead of being distracted… People do things that get in the way of getting where they need to be. It’s all in that nutshell right there. That’s what we got to try to get our guys to do.”