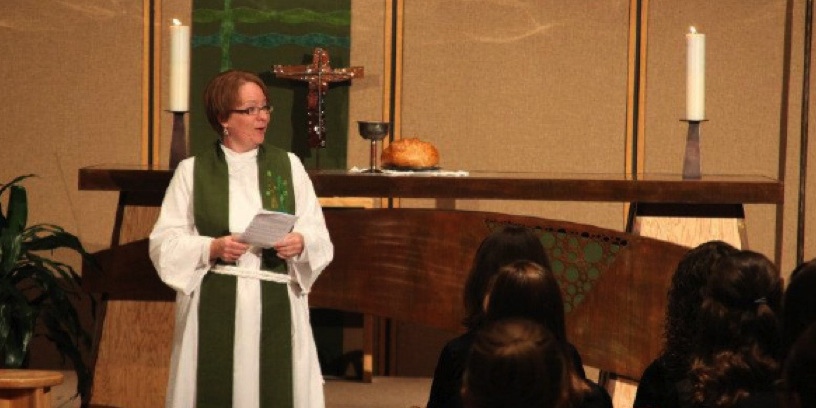 Their job on campus is to encourage students to think about vocation and calling.

Tessa Moon Leiseth and Jon Leiseth have accepted a position with the Evangelical Lutheran Church of America’s Global Mission in which Tessa will serve as the country coordinator for the Young Adults in Global Mission in South Africa – a decision that depicts an ongoing vocation in their own lives.

In June, Tessa, Jon and their children, Isaac and Sophia, will move to Pietermaritzburg, South Africa where they will stay for a minimum of four years. While there, Tessa will serve as pastor and advisor to volunteers in the ELCA Young Adults in Global Mission program. Jon will use his background in theatre and storytelling to assist Tessa’s ministry and explore new options.

The couple has worked at Concordia College for four years with Tessa serving as campus pastor and Jon in multiple roles, including theatre faculty and, most recently, vocation associate; they will finish the academic year in their current positions. Their announcement to campus via an email from President William Craft was intentional and carefully thought out, according to the couple.

“My work is about relationships,” Tessa said, “and I needed to honor the nature of those. It was important to me that people knew broadly and at the same time.”

The couple will spend two weeks in January at training in Toronto with other ELCA global personnel, and Tessa will be gone during March for in-country orientation.

“We wanted people to find out together what we’ve said yes to,” Jon said.

In her new role as country coordinator, her work will continue to be about relationships. A key role for her, as named by the ELCA, is to provide support for eight to 12 volunteers between the ages of 19 and 29 who will serve for one year in South Africa.

As partners in campus ministry, Pastor Tim Megorden knows that Tessa’s talents will serve her well in this new role.

“She is extremely gifted in the ministry of accompaniment,” Megorden said. “She has great interest in the other story and is skilled at being transparent about her own story.”

Tessa’s pastoral role will allow her to accompany students in their discovery and adaptation to a new country. She will plan retreats for the young adults in South Africa in addition to making site visits and coordinating work assignments, housing and meal allowances for those volunteers who will serve the ELCA in capacities that match their own unique talents.

When a student is selected for the YAGM program, according to the YAGM website, she works closely with ELCA churches as observers who navigate outside of her comfort zone to build relationships with a local community while serving others. One might teach in a school, coordinate youth ministry programs or do other tasks assigned to him by his country coordinator.

Jordan Lutz, co-commissioner for Campus Ministry Commission, has worked closely with both Tessa and Jon. He says Tessa’s gift for companionship will serve her especially well when working with young people who will be adjusting to a new culture.

“She’s good about knowing how to empower, rather than micro-manage,” Lutz said.

This will not be the couple’s first experience with Africa. While in seminary, Tessa spent two and a half months studying in Zimbabwe. Jon, on the other hand, has never visited the continent but has been interested in South Africa, its people and their storytelling through theatre since high school, when the country was still in apartheid.

“They use a clear and inclusive language for the faith,” Megorden said. “That will serve them well in a country that, historically, has had a lot of divisions in it.”

Despite their interest in South Africa, the couple first applied for a different position through the YAGM program. But, in an email, they were notified of the South African opening and were asked to discern.

One of Tessa’s favorite books is “Let Your Life Speak” by Parker Palmer, and she says it will definitely travel with her to South Africa. In it, she said, Palmer discusses discernment.

“He says that it’s about going through each open doorway until there are no more open doors,” she said.

The Leiseth kids are excited about these new doors. Isaac, eight, though disappointed there will be no ice hockey in South Africa, is excited about living near lions, and Sophia, six, was first sad she wouldn’t be bringing her bed with her but is now excited about learning African dance.

Jon and Tessa, too, have recognized some challenges that will be involved in this adventure. Included on Jon’s list of fears are poisonous snakes. For Tessa: driving.

Large issues also await them. Having patience with themselves while adapting to a new culture and saying goodbye to friends and family are two challenges the couple already recognize. All connection will not be lost, however, as the family will keep a blog and maintain Facebook sites regularly.

Both Lutz and Megorden expect the Office of Ministry to look and feel quite different in the Leiseths’ absence.

“Our time at Concordia hasn’t been defined by their presence,” Lutz said, “but they’ve definitely been the face of campus ministry for me.”

When he learned about her decision, Lutz said any sadness he felt for the campus community was outweighed by his excitement.

“The example they are setting is really valuable,” he said. “Seeing the choice they’ve made makes me realize that college isn’t the only option you have to be globally engaged.”

The Office of Vocation and Church Leadership will host a brown bag lunch on Monday, Dec. 12 from 11:45 to 12:45 in the Wall Lounge. The conversation will be facilitated by Jaqueline Bussie, director of the Forum on Faith and Life, and will allow students to ask questions of Tessa and Jon about their discernment process.