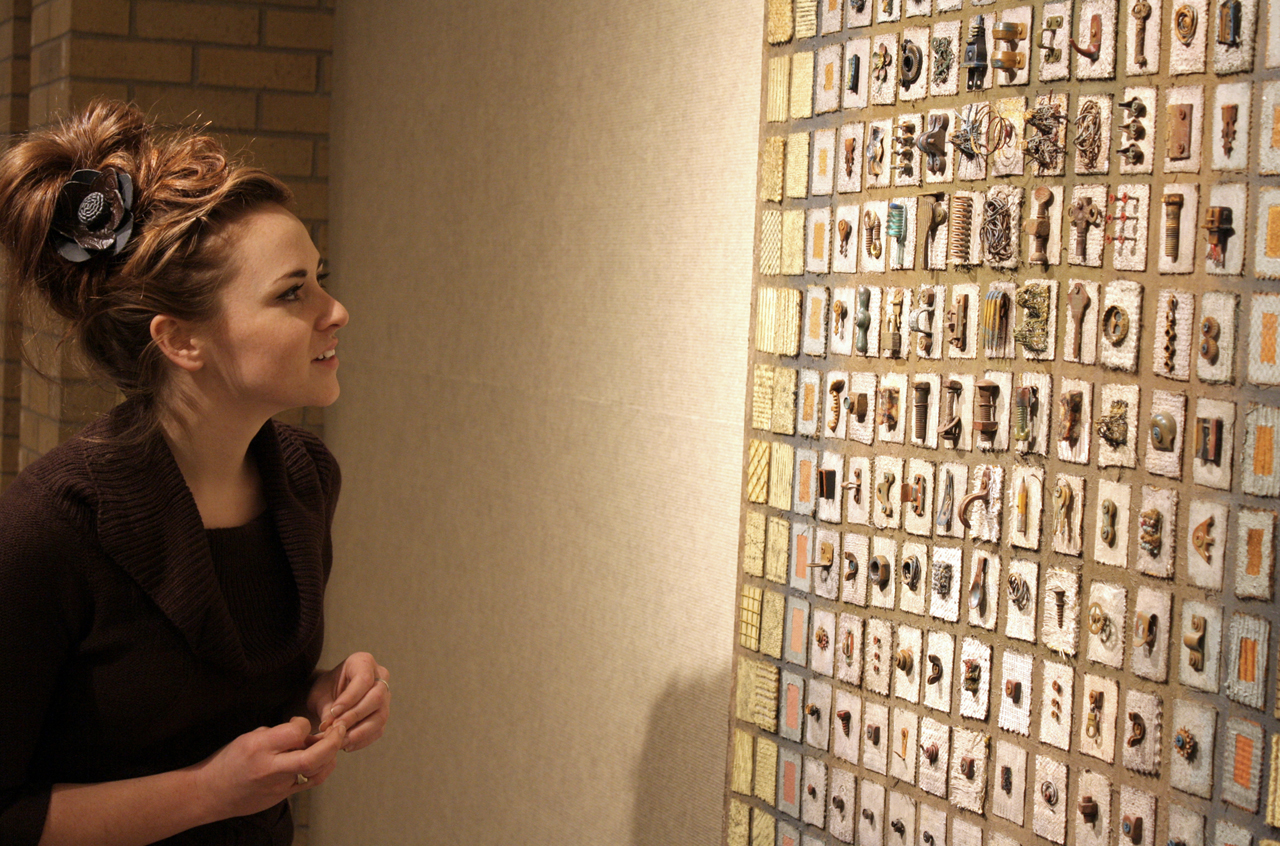 A weathered key protecting a lost secret, the pronged-ends of a fork, a worn pencil that has seen many pages and the hinges of doors no longer swinging—a rather uncommon grouping of objects—looked at home with one another in the works of art instructor, Mike Marth.

Faculty members of the Concordia College art department had the opportunity to showcase their work at Concordia’s Annual Faculty Art Exhibition on Jan. 17.

The reception was held in the Cyrus M. Running Gallery which begins in the 50-foot skyway connecting the Olin Center with the Francis Frazier Comstock Theater building. Students and community members of the Fargo-Moorhead area were in the gallery admiring the assortment of artistic creations.

Marth, an instructor in the art department, incorporated, what he called, “found-materials”—materials he finds—into his work because they’re “recognizable and familiar,” Marth said. “They’re being presented in different ways.”

The intersection of smooth lines and harsh angles could be seen in the worn, clay sculptures of associate professor Ross Hilgers.

“It’s kind of like a ying-yang marriage of ideas,” Hilgers said. “They’re not necessarily meant to come together, but when they do, it creates very interesting forms.”

Furthermore, Hilgers gave many of his creations an aged appearance by spackling a rustic-metal onto their surfaces.

Despite the apparent choices made in his work, Hilgers described the creative process as being one more of feel than intention.

“A lot of the thinking happens with the hands and the heart . . . a pure reaction to what the material is saying,” Hilgers said.

Not only did the exhibition voice the importance of recreating the way we see the world, it was “inspirational and motivating … a display of the importance of craftsmanship,” said senior Ashley Dedin, an art and philosophy double major.

Dedin expressed her interest in seeing professors as working artists, an idea echoed by both Marth and Hilgers.

“It’s something that permeates everything I do and think about all the time,” Hilgers said. “I hope it’s encouraging to them.”

The gallery will remain open to the public Mondays through Fridays from 9 a.m. to 4:30 p.m., but it will be closed during mid-semester recess Feb. 25 to March 4.