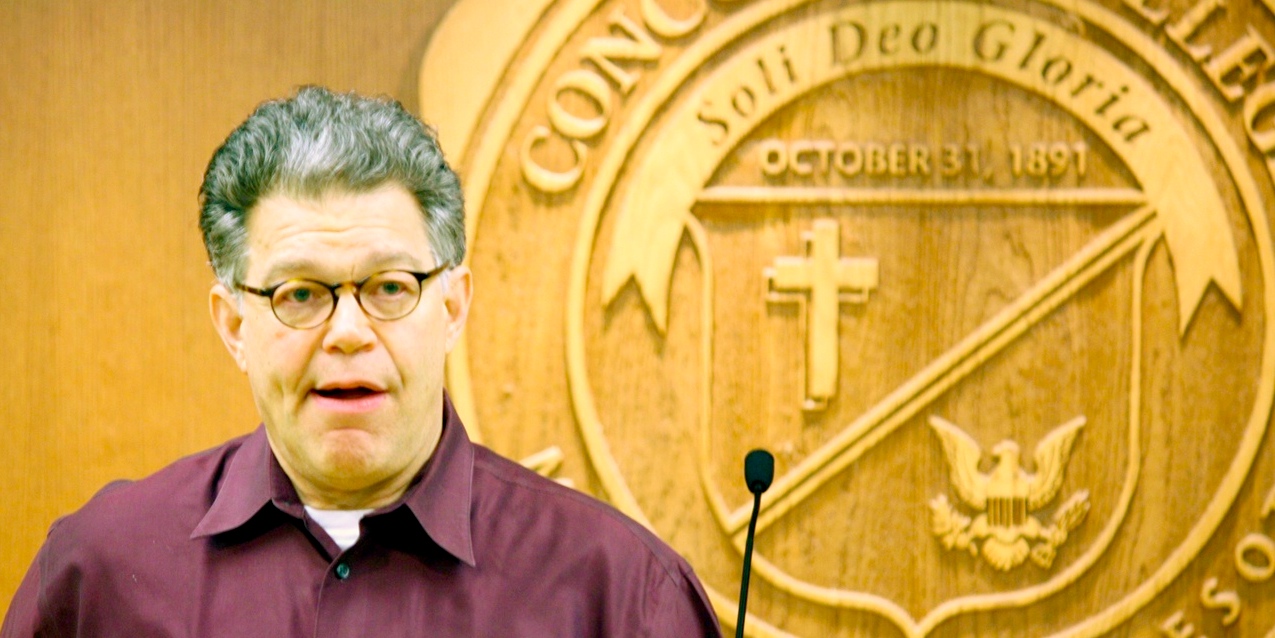 Sen. Al Franken opened with a question at the Jan. 10 conversation with members of the Campus Democrats.

After he asked how many students in the room work while also going to school, nearly every person shot a hand into the air. People who work 10 hours a week kept their hands up, at the Senator’s prompting. A few hands dropped. Then, those who work more than twenty hours; slowly hands trickled down.

“That’s not so bad,” Franken said. “Sometimes when I talk to students at state schools, it’s often 20 hours plus for most people.”

That Minnesota students have to work themselves through college and still manage to escape with an average of $25,000 in debt is exactly what has caused Franken to focus on making college more affordable. He conducted the meeting on campus to gather feedback from current students on these issues.

Franken was elected to the Senate in 2008 after winning by 312 votes. In Washington, he now serves on committees including Health, Education, Labor, and Pensions (HELP); Judiciary; Indian Affairs; and Energy and Natural Resources.

To date, Franken has placed a special emphasis on K–12 education and has worked against the “No Child Left Behind” act. Now, he said, it is time to turn his attention towards higher education.

“So much of the education costs are going on your backs,” Franken said, “and that’s going to hurt our country. In fact, it already has.”

America, he said, used to be ranked first in percentage of college graduates. Now, the United States finds itself in ninth place, and is falling quickly to a tie for 15th. Compared to several European nations that pay for their students to attend university, the cost of attending college in our country is one of the reasons fewer students finish college, according to Franken.

The conversation moved from an address by Franken, to a question and answer session.

One student curious about Franken’s plan of action asked about his approach to reducing the cost of college.

“I don’t know,” he said. “What I do know is that I want to know why college costs so much.”

Another question he and his staff are beginning to research is the idea that maybe not every college has to have everything in terms of programs and equipment.

“Do you have to have everything at [Minnesota State University] Mankato and everything at Winona? We need to look at that,” Franken said, noting that any further plans to reduce college costs are abstract at this time. The feedback he receives from current students, he said, will inform his next steps.

Senior Skyler Vilt agreed that making Minnesota schools more specialized seems like a good idea in theory, but it might be challenging in principle.

“I don’t know how well that would be put into practice,” Vilt said after the meeting. “It seems like it would take a lot to change the culture [of a college].”

Vilt, a sociology and history major, likes that he can attend Concordia, which he sees as an “all-encompassing school,” and not a niche institution.

“I like that I can go here and have friends that can be philosophy majors, and chemistry majors, and marketing majors, or whatever,” Vilt said. “And we can build a business school.”

If Minnesota takes measures like this for the sake of college affordability, Vilt says he thinks a large contingent of the state would hold to the belief that schools should keep their variety so their student body can remain diverse.

Franken said that his staff has already begun taking a closer look at these questions.

Chris Snyder, co-chair of the Campus Democrats, along with Erik Hatlestad and Jake Fauchald, was surprised with the turnout for the event, especially since classes hadn’t yet begun.

The event was scheduled as a closed event at the request of the senator’s staff, according to Snyder. Franken specifically asked for the meeting to be with like-minded students. The Campus Democrats, who meet Wednesdays at 8 p.m., worked to campaign for Franken during the 2008 elections.

“I don’t think it could have gone much better,” he said. “It went exactly as we had discussed with his staff. He said he would give us an hour, and he ended up giving us an hour and a half.”

In most of his responses, the senator, who worked as a comedy writer for television shows including Saturday Night Live before his political career, managed to elicit laughter from the crowd.

For example, when asked what he believes Minnesota is doing right in educating its college students, he answered first by citing Concordia’s language programs for standing out nationally and Alexandria Technical College for its status as eighth best tech school in the country. But then, a follow-up answer:

“I actually don’t know what it is,” he said, “but I think it has something to do with Scandinavians.”