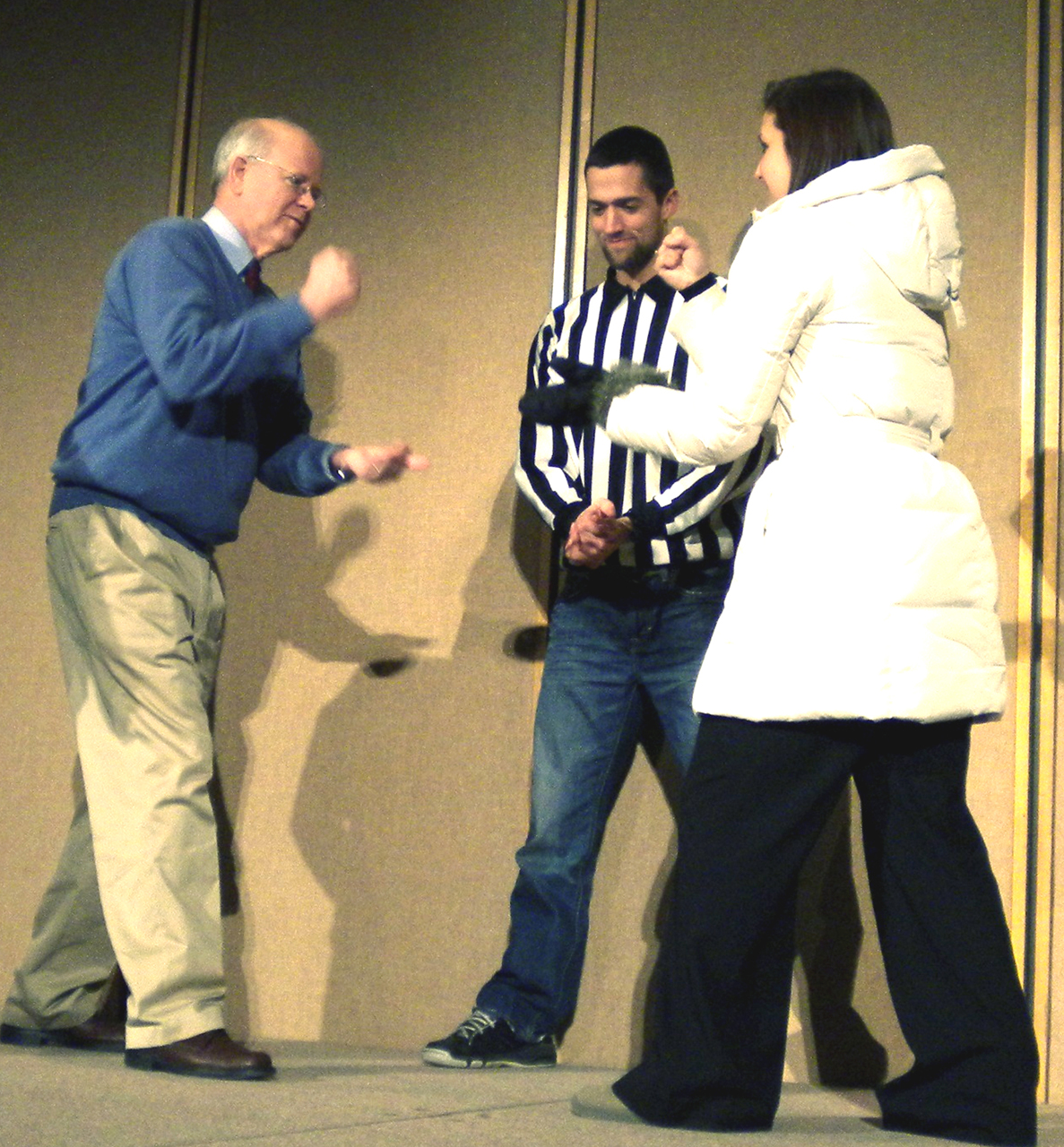 The atmosphere was electrifying, the energy palpable, as Kendal Black of the Office of Student Success and Retention Services stood facing her opponent, President William Craft, at the fourth annual Rock Paper Scissors Tournament on Jan. 23 in the Centrum.

The two figures loomed large, center stage, a bright light casting their shadows on the wall behind them as the diverse crowd of spectators, recent losers and peer mentors of Student Success swarmed the platform for the final showdown, best of 5.

The words travelled around the Centrum as if each were a runaway chariot skidding around the Colosseum. The sound of fist meeting open-faced palm reverberated like the thuds of an elephant.

“Black trumps Craft, a 3-0 sweep. The crowd erupts into applause and cheering.”

“We have our champion! Kendal Black, representing Canada, has done it! It’s all over folks!”

Black, a graduate of Concordia College, was able to share a few words after the victory.

“I’m just kind of overwhelmed with emotion at this moment,” she said. “It’s a dream come true, really.”

In addition, she won the honor of taking home the coveted Rock Paper Scissors Championship belt.

President Craft also shared a few words about the event.

“I once hit 15 straight foul shots in the seventh grade,” he said. “This is my greatest athletic achievement since.”

At the beginning of the event, competitors partnered up with an opponent and faced-off for the first round. Losers moved to the right, winners to the left. The process continued until only Black and Craft remained. Gift cards from Subway and Erbert and Gerbert’s, along with t-shirts, were raffled away between the rounds of elimination.

This event is just one example of the efforts the Office of Student Success and Retention Services makes in order to foster community development among the students, both freshmen and upper-classmen.

The event was organized by Concordia’s Peer Mentors, whose job is to engage with incoming students to make them feel welcome their first year and ensure that their experience at the school is enjoyable.

Sophomore Howard Mukanda, in his first year as a peer mentor, spoke of his influences and aims in being a peer mentor.

“I had a mentor and appreciated what he had done,” he said.

Now Mukanda specializes in mentoring international students and serves as someone to reach out to his 18-20 mentees.

“It is really wonderful to know you are working with other students, serving as a role model and someone to call upon,” Mukanda said.

Junior Jamie Telander, a second year peer mentor, spoke about the origins of the event.

“It started from the idea of another college and how everyone took off the night to come together and turn a simple game into a challenge,” she said.