‘Cobber and I Know it’ parody song goes viral 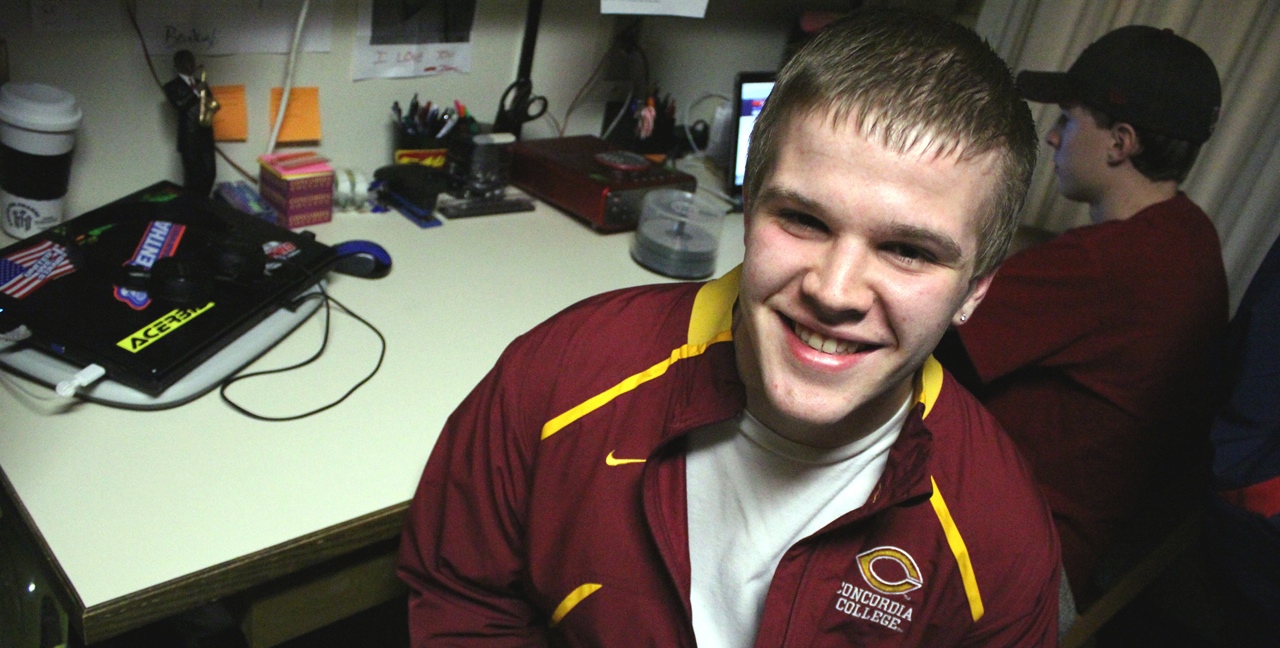 Freshman Michael Brumm plans to make a music video for his recent Concordia anthem, “Cobber and I Know It.”

His song, posted Jan. 17  to Facebook and later to YouTube, parodies LMFAO’s “Sexy (And I Know It).” In less than a week the song went viral with more than 180 shares on Facebook and over 2,000 views on YouTube.

He only expected his orientation club and other friends to see the video.

“I was thinking a few people would ‘like’ it,” he added.

Freshman Kristian Erickson, the music recorder and editor, likes the messages behind the lyrics, some of which include “This is how we roll, got that beanie slant out of control” and “I cob out!”

“The cheesiness of it shows school spirit,” Erickson said. “You can’t show spirit without getting cheesy.”

Even Brumm’s oral communication professor Kirsten Theye noticed the song on Facebook, where several Concordia alumni were passing it around. She went on to show the video to her senior level Integrated Marketing Communication class.

“It shows how organizations don’t get to choose how they’re represented,” Theye said.

Viral songs are an aspect of social media that affect a college’s branding, or, rather, the perception the outside world has of Concordia.

“It would be cool to get Dr. Craft, Dr. Jones and Russ Peterson,” Brumm said, of people mentioned in the original song.

He also suggested Cobber Nation, Concordia’s well-known game-day enthusiasts, would be a great addition.  Erickson, who participates in the group, said he would try to get them to paint up and be in the video.

“Obviously the video would be cleaner than ‘Sexy (And I Know It),’” Brumm said. Anyone who has seen that music video knows about the Speedos and provocative movements.

Erickson recorded the music in his traveling recording studio in his dorm. He used an Audio-Technica microphone for vocals and Brumm’s karaoke track for the accompaniment. When Erickson records his own songs he uses a MIDI keyboard for beats and melodies. To edit songs, Erickson utilizes Logic Studio.

For the upcoming music video, Brumm is looking for two to three people who are good with recording and editing.

After Brumm finishes with this song, he’s looking to record even more. Recently he wrote “I Just Met a Cobber” with music and lyrics based on “I Just Had Sex” by Lonely Island.

He’s no stranger to parodies of songs. Back in his hometown of Ham Lake, Minn., he parodied songs for his church’s youth group talent shows. Lonely Island’s “I’m on a Boat” was made into “I’m on an Ark,” a song that talks about the Bible story of Noah and the flood. “Shots” by LMFAO became “Rocks,” a metaphorical song that focuses on how rocks provide a sturdy foundation.

“Cobber and I Know It” took three hours to write and two hours to record.

“I’ve been waiting to write a parody all year,” Brumm said. Now that he has, he’s ready to start on the music video.