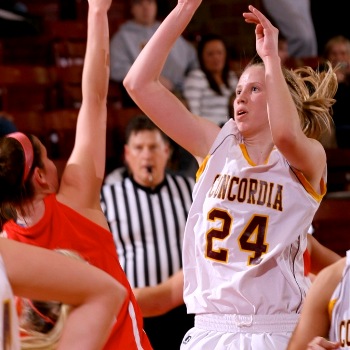 The Concordia Women’s Basketball team is in the middle of the playoff hunt.  The Cobbers (12-7 overall, 10-6 conference play) sit firmly entrenched in the top six, not an easy accomplishment having lost six graduating seniors from last year’s team.

Those seniors included three of their top four scorers—48 percent of the team’s points. Though the team has played well so far, the close of the season won’t be easy with games left against the top three schools in the conference.

“We have had a really good season so far. We are a pretty inexperienced team…we lost a couple of games early in the season,” junior forward Tricia Sorenson said.  “However, we have really good team chemistry and are moving up in the conference ranks.”

The loss of that much experience was on the mind of some team members coming into this season.

“I feel as though as a team we’ve come a long way,” sophomore center Alexandra Lippert said. “Coming into the season [and being] really young due to the loss of six seniors—I figured that this would be a rebuilding year for us, and it has. We’ve had some tough losses but have used those to learn from and improve our play. We’re still learning how to play with each other and are steadily getting better with each practice and game.”

Returners have picked up the offensive load, with three players in the top 25 of the MIAC for scoring. The Cobbers have also played defense, holding opponents to a conference second best 36 percent shooting.

“Our team’s leading scorers last year all graduated, so this year I have had to have more of a scoring role,” Sorenson said. “However, we are a very talented team and we have various people who step up each night.”

“I am trying to be more aggressive than I was in the beginning of the season,” junior guard Emily Thesing said. “It helps when my teammates are looking for and have confidence in my shots. I think we have a good balance of scorers on the team so [in] any given game someone usually shoots the ball pretty well.”

There are a few holes in the team’s game, including a 28 percent three point field goal percentage and a negative turnover margin. The inexperienced team has also taken some lumps over the course of the lengthy MIAC schedule.

“The season is extremely long and at times I think we let that get to us with our intensity level, and it carries over to the games,” Thesing said. “Being more consistent the rest of the season will be key going into playoffs.”

The Cobbers have posted a solid 4-4 record in conference road games but are a much better 5-2 at home. They will play four of their last six games at home.

“We always play better on our home floor, and it’s always nice to have fans there cheering you on,” Lippert said. “This is where we practice, and it’s always great to play at home. Traveling gets tough, and I know that everyone is stoked that we have more home games left than away games.”

Closing out at home could be just what the Cobbers need to solidify a grasp on a playoff spot and the chance to host a first round game. The team’s expectations and goals for the rest of the year are a reflection of the process they’ve gone through this season.

The right mentality to have for an “inexperienced” team.