More than a Band-Aid 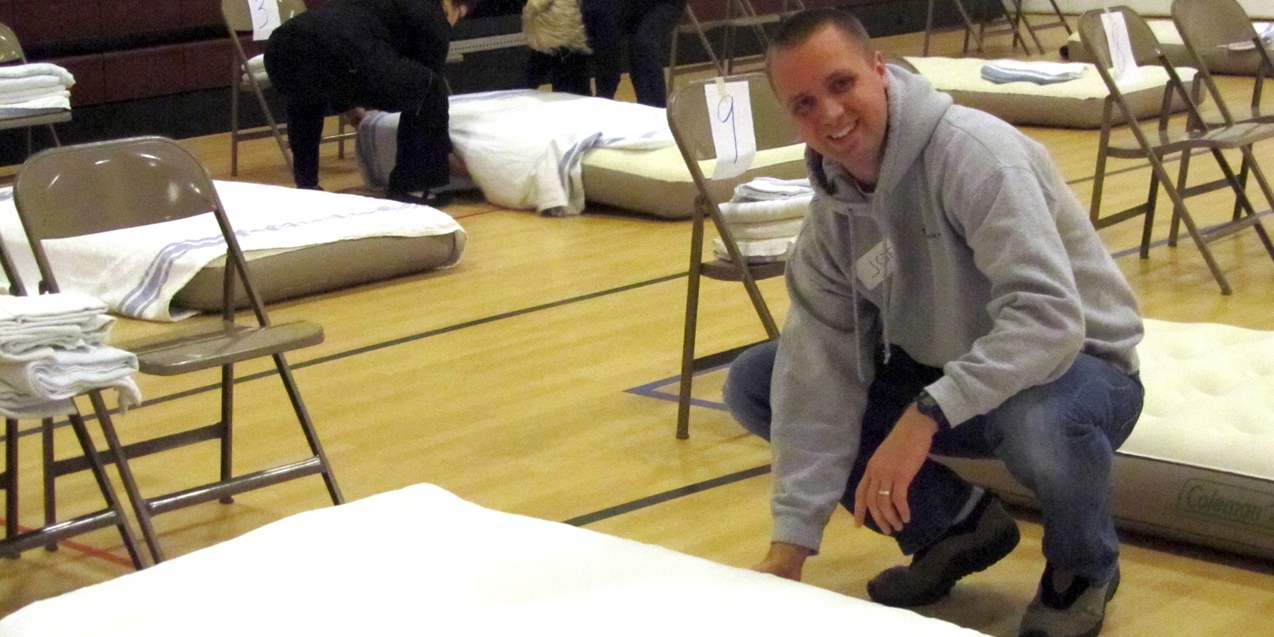 Less than three months ago the Fargo-Moorhead community faced the daunting fact that the number of homeless in the area exceeded the amount of space at local shelters. It was an emergency situation. But through collaboration with local churches, homeless shelters and volunteers from the community, overflow guests are being kept out of the cold.

“It’s amazing how it’s come together,” said retired school teacher Dave Engstrom, who has been transporting guests from home shelter to host-church as a volunteer bus driver since the process began Jan. 1. “It’s been a good experience getting to know the guys and getting to know a segment of the community we don’t particularly rub shoulders with.”

Thusfar there have been consistently 15 to 20 men of varying ages that cannot find room at homeless shelters like Churches United for the Homeless, according to the Sanford Director of Faith Community Nursing & Health Ministry, Lois Ustanko.  From Jan. 1 to March 31, eight churches have agreed to act as overnight shelters on a one week rotation.  An average day for these men, Ustanko said, is to keep their things at Churches United during the day and then stay the night at one of these churches.

“Some men have even said they prefer the church setting because it’s less crowded and more spacious,” Ustanko said. She  explained that before Jan. 1 the number of people staying at Churches United was “above and beyond their capacity.”

Overall the response to the crisis has been a literal life saver, with food, shelter and transportation provided through volunteers and donations. Guests are even able to have their laundry done at the church by Brenneman’s laundry services.

“They actually come and physically take care of the laundry,” Ustanko says, pointing out the laundry bin, “which is huge.”

However, there is still a need for volunteers who are willing to stay the night at the church as a monitor while the men sleep. Recently at Elim Church there were only four volunteers, causing site coordinators to send out e-mails reading “We need volunteers NOW”, according to Danny Luecke, a junior at North Dakota State University.

Luecke has been a consistent volunteer throughout this process, “church-hopping,” he says, to the different overnight shelters.

“This was something God was calling me to do,” Luecke said, while volunteering at Lutheran Church of the Good Shepherd this past week. “It’s a great time to do homework, pretty much all night.”

Like Luecke, many of the other volunteers expressed that they, too, were motivated to participate in this work because it was an opportunity to serve.

“It’s a good thing,” said Greg Anderson, as he tucked sheets into the rows of empty mattresses set up in the church’s main auditorium. “Nobody wants to see someone without a warm place to stay. [The] least a person can do is give back a little bit.”

Or give back a lot, in the case of Dave Weidner who volunteered every night of the week that the guests were hosted at Good Shepherd, where he has been a member since 1972.

“My wife says I’m crazy,” he said. “But this is my home church, and I had to do something for it.”

Weidner often accompanies the guests when they step outside to smoke or catch some fresh air, and it is then that he hears the stories. Through conversing with the men, he has learned that some find it easier to find a job here, while others are simply stuck.

“One hitchhiked,” he said. “One guy was double packing and slipped and fell, breaking a few bones.  Now he is stuck.”

Bus driver Engstrom had stories to share as well and spoke of a young man who was willing to wake up at 4 a.m. to trek six miles to work, because the bus didn’t run early enough.

“He just thought it was great that he had a job,” Engstrom said. “Even though the bus system is good, it doesn’t work for them.”

Transportation is just one of the issues being discussed within the F-M community. After March 31, the F-M Sheltering Churches Planning Committee is going to review the events of this winter and “identify where things went well and where things need changes,” according to Ustanko.

“This particular plan was to address this year’s need,” she said. “The intention is to not have this happen again.”

Part of making this hope a reality is creating more affordable housing, according to Ustanko. Already Gateway Gardens in Moorhead and Cooper House provide supportive housing and have had a large number of applicants who now live there. Engstrom, however, has reservations about an increase in housing being a cure-all for the issue of homelessness in the community.

“I know our goal is permanent housing for everyone, but the realist in me knows there will be homeless again,” he said. “We need a structure and fundraising…we’ll need to be ready to go.”

For Ustanko, the response to the homelessness issue this year has been a promising step forward towards being “more than a band aid.”

“I think it’s pulled the community together,” Ustanko said. “Volunteers have thoroughly enjoyed this experience, and the guests feel they have been treated with lots of respect and kindness. I think now people are rallying behind the need for stable, affordable housing. Permanent, not temporary, but permanent.”