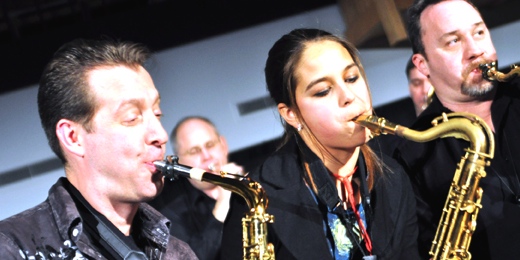 The dim lights paint the audience in shades of grey as the young brunette’s saxophone reflects golden light. The drums, trumpets, trombone and nine other jazz instruments fill the room with loud, saucy music that floats around a pre-determined chord progression, a progression the high school senior has never practiced with the rest of the band. She exchanges fours with the band’s alto saxophone player; he plays a few measures of improvisation, and she responds with equally emphatic runs up and down. Staccato and glissando, like a player who has learned from the best.

“So, do you think Sarah should come to Concordia,” Russ Peterson asked the cheering crowd after Kremer’s scat solo, “or NDSU?”  The clapping turned to loud boos, a smile came to Kremer’s face and the cheering resumed.

Kremer, a senior at Cathedral High School in St. Cloud, Minn., has played saxophone for eight years and first met Peterson while on campus for the 2011-2012 Minnesota All-State Jazz Band. He went to the concert and talked to Kremer about her sax solo after the impressive performance.

“She was firey and had tons of energy,” he said.

When Kremer visited Concordia in the fall, Peterson told her to bring her horn to Studio 222 in Fargo where his five-piece band, The Funk Commission, was playing.

Throughout the first set, she sat in the front row, but Peterson bounced in his chair remembering and imitating Kremer during that set. Leaned forward, ready to jump, he said she looked like an athlete waiting for the coach’s call.

“Put me in, Coach! Put me in!” he said, putting his words into her imagination. When she started playing with them, the crowd erupted.

“People stood up and screamed,” Peterson said. “I really enjoyed it.”

Kremer has had several similar impromptu performances throughout her musical career. While at the University of Minnesota—Morris’ Jazz festival in 2007, then seventh-grade Kremer traded fours with guest clinician Allen Vizzutti, a classical and jazz artist who has performed around the world from Tokyo, Germany and Slovenia to Winnipeg, England, Brazil and many more countries. Kremer attended the UMM festival for several years, but the experience was the first time she improvised with a famous musician. She has since worked with several accomplished musicians including Steve Jennings, Eric Merienthal and the Preservation Hall Jazz Band, an international ensemble founded in New Orleans’ French Quarter.

In Nov. 2011, Kremer saw Gordon Goodwin, a Grammy award-winning composer and performer, at a jazz event at Winona State University. Goodwin called for one person from each instrumental part, and Kremer couldn’t resist.

“I just ran onstage,” she said.

Eric Merienthal, a member of Gordon Goodman’s Big Phat Band, recognized Kremer from the UMM Jazz festival in 2008 where he had been a guest clinician the year after Vizzutti. He came up to her and just said “Yeah! I remember playing with you!” Kremer said. Her tone of voice got higher as she remembered the event, the honor of being remembered by a famous musician years later. She wasn’t expecting to be remembered, she said, but the experience has stuck with her.

Many Cobbers also remember Kremer. Senior Nicholas Ganoe, a music education major whose primary instrument is saxophone, thought she was a fantastic player from another college in the area.

“I was totally shocked [when Peterson announced she was a prospective student],” he said in an email. “Both of her performances were fantastic and rivaled anything that anyone else in our saxophone department could play… if she wants to perform, I think she could make it at a conservatory.”

“She’s fearless and good,” Peterson said. “She’s not afraid to walk into a place, pull out her horn and start playing.”

After impressing Cobbers in the Centrum, Kremer hurried off the stage, packed up her sax and rushed over to Memorial Auditorium just in time to play in the Choral Festival talent show.

As the whistling of Maroon 5’s “Moves like Jagger” played over the speakers, Kremer tapped her foot and swayed her sax side to side while playing the popular melody. By the time front-man Benjamin Levin would begin the chorus with “I don’t need to try to control you, look into my eyes and I’ll own you with the moves like Jagger,” Kremer was floating around the melody, playing enough to recognize and enjoy the song but taking creative liberties and turning it into a jazz lick. Three prospective students in the top row of the auditorium seating were dancing, standing up and cheering while pumping their fists in the air. After the standing ovation sat back down and the cheering stopped, the three-judge, American Idol-style panel shared their feedback.

“That’s what I’m talking about!” said Chris Kenney, a sophomore vocal performance major and the ‘Randy’ character in the emcee panel during the talent show.

“I like to judge songs by whether or not I could have danced to them,” said Britta Fitzer, a senior music education major and the ‘Paula’ character, “and I could’ve danced all night to that.”

The following day, Kremer sang with the Youth Chorale of Central Minnesota as one of four featured choirs in the Choral Festival concert. Not only does Kremer play a mean jazz scat on the sax, but she also plays violin and piano, sings soprano, participates in five school-related ensembles, and captains both the nordic ski team and the state champion cross country team. In addition, she plans to audition for the role of Rizzo in her high school’s musical “Grease,” because she has never been onstage in a theatrical production before.

“I’ve always regretted not being in a musical,” she said, excepting her role in one pit orchestra, “and I want to finish high school with no regrets.”

She plans to participate in varsity track, band and choir at Concordia—a seemingly impossible task but one that she has discussed with Peterson and Marvin Roeske, the women’s cross country coach. Because cross-country is a team sport based on individual performances, athletes can do workouts on their own time, Roeske said. It is different from other sports, and some students like Kremer can still be athletic while performing in multiple ensembles.

“Some kids realize they have to make choices, [but] sometimes they cope really well,” Roeske said. “I think she’s the kind of person who can make a combination work.”

After a thrilling few days on campus filled with a music scholarship audition, three on-stage sax performances and a 36-hour choral festival, Kremer looks forward to her last semester of high school and returning to Concordia.