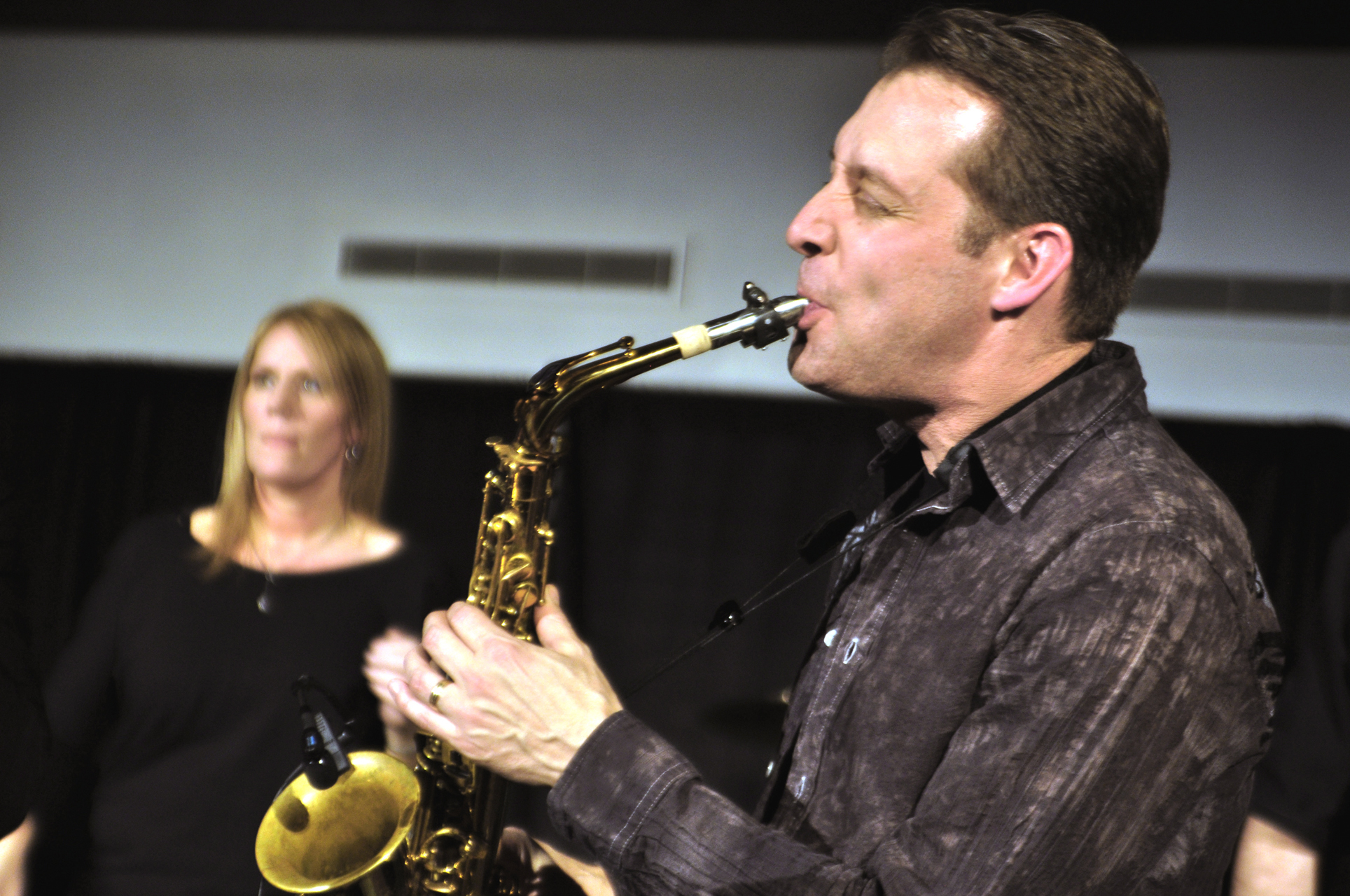 By day, professors Russ Peterson and Nat Dickey roam the corridors of Hvidsten Hall. They teach classes, help students in private lessons and conduct ensembles. By night, however, they play to a different tune as they take the stage with their band, Post Traumatic Funk Syndrome.

“We love to play,” Peterson said. “Some people do drugs, but I don’t need to. I play music.”

While they most often perform at a variety of off-campus venues in the Fargo-Moorhead area, the 12-member band made an appearance at Concordia on Friday as students twisted, swayed and boogied along to their assortment of classic horn band hits. The band performs songs by bands like Chicago, Earth Wind and Fire, The Blues Brothers and Stevie Wonder, which had students singing along all night, despite the fact that the lyrics were written before most of them were born.

“It’s really fun to see our professors in their element,” sophomore Kelsey Knutson said during the concert. “They have a lot of energy. All of the people watching are just so enthusiastic about what they are hearing.”

Both Dickey and Peterson expressed excitement about the opportunity to play for a large group of Concordia students, though they do often have Cobbers come to their shows at other venues in town. Peterson, who plays alto saxophone for the group, said that he hopes to inspire his students to pursue jazz in addition to learning how to play classically.

When Dickey was in college, he said he was pressured to make a decision between playing jazz music or classical music on his trombone. While he originally chose the classical route, he has adapted and come to greatly appreciate jazz through a band he played with in college and now in Post Traumatic Funk Syndrome, though he did feel like a “rookie” at the beginning.

Providing inspiration to jazz enthusiasts Friday, Peterson invited high school senior Sarah Kremer up to the stage to play “The Chicken” with the band. Kremer, who was on campus for the music scholarship events, met Peterson and was asked to join the band and perform a jazz  saxophone solo with the group that she made up on the spot.

“I don’t think when I play,” Kremer said. “I just become part of the music.”

Kremer, who has been playing the saxophone since fifth grade, is still making her college choices, though when Peterson asked the crowd “Should Sarah come to Concordia?” they responded with a resounding and boisterous yes.

Dickey says that while most of their music was written in the 1970s and 1980s, he thinks students relate to it because of the energy and complexity they bring to music.

“This music has an appeal,” he said. “We are a big group, and our energy just comes off the stage, because twelve people collaborating is very interesting.”

The band is made up of two lead singers, three saxophones, two trumpets, a bass, a keyboard, a guitar and drums. Most of the members are involved in music in the college setting, and many play in the Fargo-Moorhead Symphony in addition to Post Traumatic Funk Syndrome.

“We are very selective about quality and players,” he said. “That, combined with brilliant arrangements, gives us a huge number of tunes that work.”

Peterson, who arranges the majority of the band’s songs, said that having experienced musicians is one of the group’s biggest assets because they need less rehearsal time to make songs performance ready.

“The beauty is, I can put sheet music in front of these guys and they sound like a million bucks,” he said.

Because all of the members are in their 30s and 40s and most have careers and families in addition to playing in Post Traumatic Funk Syndrome, Dickey said that he personally has to prioritize his activities and that the band is one of the highest priorities for him.

“The energy of loyal fans is a lot of why I do this,” Dickey said. “Which is good, because most of the time we get paid just enough to pay the babysitter and buy gas.”

He also said that commitments outside the band are what “keep a lid on the band getting too busy.” While throughout most of the year the band plays an average of two gigs a month, summers often are busier with playing at wedding receptions. Additionally, they were named the Best Cover Band in the Region by the “High Plains Reader” last year. Some of their most memorable shows include playing at halftime of football games with the North Dakota State University Gold Star Marching Band and playing shows at the Aquarium in downtown Fargo. Peterson attributes their ability to play in a diverse variety of settings to the music they play.

“I think everyone appreciates that it’s a little nostalgic,” Peterson said. “Either they grew up on it or heard it from their parents or they just enjoy the instrumentals.”

While Dickey claimed that the band will not be hitting the road for a tour anytime soon, he did say that another CD and many more arrangements will likely be in the works. However, as long as they keep playing, they will be happy.

“People listening is just a bonus,” Peterson said. “We could play to an empty room and be happy.”