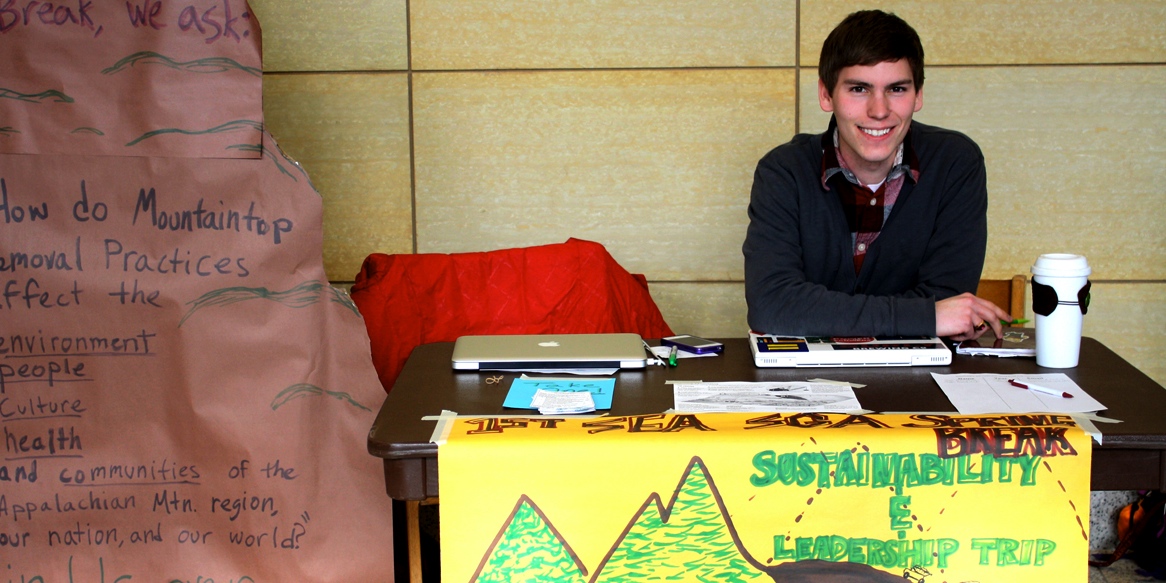 On the morning of Feb. 24 two vans will depart from campus, beginning a spring break trip to the Appalachian Mountains of eastern Kentucky. The trip will focus on the environmental and social impacts of mountain top removal for coal mining in the area.

Senior Nathaniel Cook has planned the first-time trip in an effort to create more co-curricular opportunities that align with the college’s recent focus on environmental sustainability. The trip, he said, will allow students to see the impact of environmental issues on individual, local, national and global scales.

“We talk about being globally engaged and about global warming being one of the biggest issues of our time,” Cook said, “but it’s not common knowledge among students.”

The itinerary includes visits to four communities affected by the coal industry’s methods, tours of mountain top removal sites and conversations with nationally known authors. The group will also spend a day in Frankfort learning from the largest social justice non-profit in the state, Kentuckians for the Commonwealth, about the role of non-profits in lobbying for change.

Concordia students will also collaborate with a group of students from Berea College in Berea, Ky., and share ideas about what students can do on their campuses to raise awareness about environmental and social issues.

“This is an issue a vast number of Americans don’t even know about,” Cook said. “Cheap electricity comes from coal, and the majority of coal comes from blowing up mountains.”

Two days at the Nobel Peace Prize Forum at Augsburg College will form the capstone of the trip, as the caravan will land in the Twin Cities before they return to Moorhead. The group will attend the final pair of conference days focused on education and global studies.

One of the featured speakers is Alf Bjorseth, chairman of Scatec AS, a leader in renewable energy innovation.

“I hope this event will help us analyze our experiences from a more global perspective,” Cook said.

Membership with the Student Environmental Alliance is not required for participants. Since the trip is organized independently from any campus organization, Cook applied to receive funding from both the Student Government Association Sustainability Fund and the Special Projects Initiative Fund. His main goal was to keep the cost of the trip affordable.

In order for projects to qualify for SPIF, according to Nathalie Rinehardt, assistant director of student leadership and service, the idea must be “audacious” in scope. Since January 2011 when the SPIF was created, allocated but unspent money from the student activity fee has been given to students who have an idea but need funds to support it.

“This trip allows students to be part of a groundbreaking idea at Concordia,” she said, “that we feel our commitment to sustainability is so important that we want students to spend their spring break learning about it.”

Requests for the SPIF need to demonstrate that the project will benefit the whole campus. Educating peers and classmates upon returning is a major focus of the trip, according to Cook.

“It’s complicated, but I think Nathaniel is in a great position to make it happen,” Rinehardt said. “And he has the support of key faculty to help along the way.”

Kristin Brethova, Concordia’s first Sustainability Coordinator, says a trip like this was well designed for education because in the Appalachians both social and environmental issues go hand in hand.

“Hopefully this trip will empower students,” Brethova said. “You can know something is happening, know that it’s having an effect on people. But it’s totally different to see it.”

Brethova, who recently moved to the Fargo area, sees the trip not only as a fun experience for students but also considers it to be about sharing what they learn with others. Sustainability education, she said, will be a primary focus for her in her role as sustainability coordinator.

Coal mining in the Appalachians – the oldest mountain range in the world – has become highly mechanized, said Cook, which creates fewer jobs and economic strain on communities. When a group called Restoring Eden presented on campus during his freshman year, Cook first learned of the negative implications. Sludge from the mining waste creates negative health effects for people who live close to removal sites, and the destruction of mountains in general strips family heritage from folks who have lived in the mountains for generations, he said.

“Even if you aren’t a mountain person,” Cook said, “this is an American issue. It’s [a]piece of our national identity.”

The trip is open to students from all areas of study. Freshman Andrew Carlson, who is undecided in his major, first became interested in the trip because of his increasing interest in social sustainability,

“This trip seems like it’s not just about ‘save the earth, save the trees,’” he said, “but it’s ‘save the people.’”

In addition to learning more about an area of study Carlson might pursue, he also said that it seems like the perfect way to get off campus and expose himself to a place he’s never been.

“I need some adventure,” Carlson said.