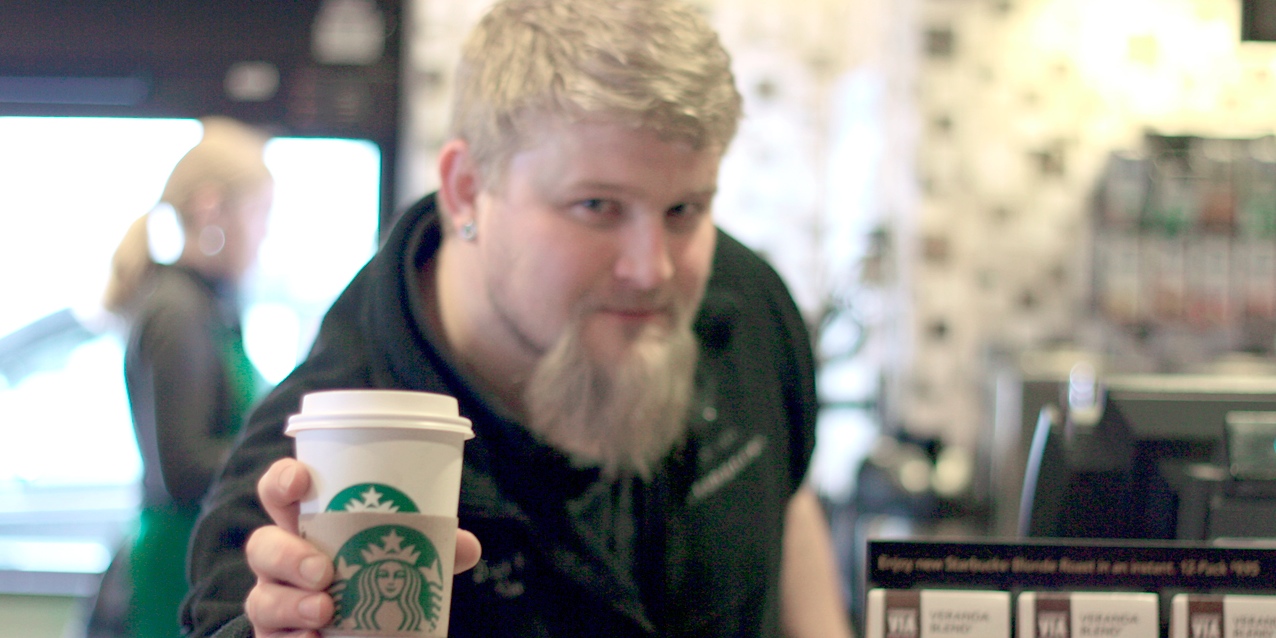 Nate Tower, store manager of the Starbucks on Eighth Street, was fired from his first job as a barista.

At 17, his parents forced him into a part-time job at Great Plains Coffee and Roasting Company in Sioux Falls. It wasn’t his ideal work situation, and it showed, so his boss – and good family friend – told him to take a hike.

But now he moves around behind the counter, encouraging employees to keep the bar clean, greet customers with a smile, make the drive through efficient and have fun at work. The electric buzz of the blender overpowers the John Mayer song floating through the speakers as Tower organizes a box of Sumatra roast on the stock shelves.

“Weird,” he says of his first attempt as a coffee shop employee, “because now I have a hand in what you might call the largest coffee purveyor on the planet.”

Though he graduated college with a literature degree, he never quit the coffee business. And his experience shows. Since Tower became the store manager, sales at the only Starbucks in Moorhead have increased by 18 percent two years in a row.

The blender stops and Tower, who sports a four-inch blond beard, overhears a piece of conversation from the corner armchairs where a father and son drink matching caramel macchiatos.

There’s a quiet tension between them. Back in town after a failed semester at University of California Berkley, the son breaks the silence first.

“I’m almost done with that Steve Jobs book,” he said.

The dad raised his eyebrows.

“President Obama talked about Jobs in his speech last night,” he said.

It was the State of the Union address. Hints of cinnamon and dark roast fill the air.

“Just that he was a man that made opportunities for himself.”

That’s what Tower does. Creating opportunities, in fact, is central to his role as store manager. He wants his employees to enjoy their time at work and focuses on skill and leadership development.

“It’s not really coffee,” Tower said of his business. “It’s more so people. I just happen to serve coffee.”

Barista Bailey Carlson, a Concordia College freshman, agrees. She works the early shift – 5:30 a.m. – on Tuesdays and Thursdays, and there is usually someone waiting to come in when she opens the doors. Business professionals and professors are the main patrons in the mornings, and college students fill the lobby from mid-afternoon to close.

“We have to be ready to go,” she said, “because people have to get [places] on time.”

According to Carlson, the national average for employee-customer interaction at a drive-through window is 30 seconds. But at this Starbucks, baristas keep the window open until the drink is ready, making conversation with the person.

Tower and his Starbucks employees treat customers as people with stories and not just as nameless, coffee-deprived people who keep coming back for more. Tower knows that people are looking for the “Starbucks experience” and has that in mind when he makes decisions for the store, from the soundtrack to the temperature of each drink.

Starbucks regular Brianna Vorce, a junior English writing major, appreciates that Tower and the baristas pay attention to her. On his way out the door after a 7 a.m. to 3 p.m. shift, Tower stopped at her table when he noticed she was reading Nadine Gordimer’s “The Conservationist.”

“Oh,” he said with a chuckle only other English majors would understand. “I’ve read that. I have a lit degree.”

She bobbed her head in understanding, and they talked about the detached writing and difficult plot as she drank her tall blonde roast with creamer.

“That was awesome,” Vorce said. “He acknowledges me as a person and not just a customer.”

Carlson said Starbucks baristas work hard at being extroverted. It’s quite easy for them to do when their leader sets a good example.

“We get to know our customers by name, not just by what they drink,” she said.

The highlight of the week for Tower happened during the morning rush when one of his newest employees made a flub while working the drive-through headset.

“She said ‘Welcome to Subway’,” he mocked in a high voice, “‘this is Mary can I take your order?’ Oh, that was hilarious.”

Combine the fun atmosphere, energetic baristas and extensive coffee menu, and  it is easier to understand Towers’ recipe for increased sales: it’s a double shot of caffeine and charisma.