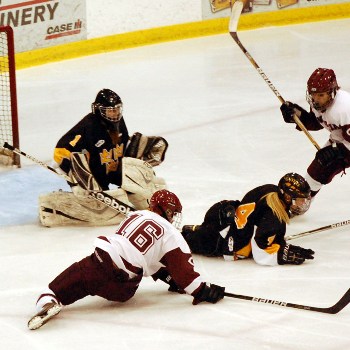 The Cobber Women’s hockey team is having one of the best seasons in program history, and they look to continue that success going forward.

Occasionally, numbers and statistics don’t make sense upon first glance. For example, the women’s hockey team has been nationally ranked since Nov. 28, 2011. They have been in the top ten in the U.S. College Hockey Online national poll. In other years the women would probably be leading the MIAC. This year though, the number one team in the conference is Gustavus Adolphus.

That just gives the team more motivation to maintain their high level of play.

“This season has gone very well so far,” Senior Katelyn Dold said. “Being successful always makes for a more positive and enjoyable atmosphere.”

“I think being ranked just sparks us to work harder,” Dold said. “We have to work harder if we don’t want to lose the spot where we’re at, and obviously we want to see ourselves climb even more. I think one of the major impacts is having a solid core, from freshman to seniors and goalies to forwards. We trust each other and that is what will make a team successful.”

It also helps having three players in the top ten in scoring. Dold, Abby Taffe and Breann Julius have scored 36 goals in 17 games this year.

Taffe, who leads the team in points, attributed the success so far to the team putting in hard work at practice.

“The team has been playing so well this year, because we’re all learning what our roles on the team are and know how to push each other,” she said. “We’re constantly mixing things up in practice to challenge each other and make each other better. It takes effort from everyone to earn success, and for the most part we’ve been putting in that effort.”

Julius, the team’s leading goal scorer with 14 goals, also had good things to say about the team’s work ethic.

“We have learned to play with each other and know where each other are going to be on the ice for the crucial times during the game,” she said. “The team works hard in practices all the time and we try to do the little things in practice to make us faster, stronger and hard working.”

The Cobbers have cooled off since their 8-2-1 start; they’ve gone 2-2-2 in their last six games, including a recent tie and loss to Gustavus in their two game series.

“The biggest thing this late in the season is to stay focused,” Dold said. “It gets to be a very long, exhausting season, so staying focused is vital. We come to practice to play hockey, not think about school, work or anything else. We know what we need to do to get one of the open playoff spots, and we won’t stop until we get there.”

Taffe agreed with the midseason grind affecting the team.

“This time of year is always challenging because it has been a long season, and a lot of people tend to get worn down,” she said. “It takes a lot of mental strength to get through an entire season, but we’ve found ways to stay strong. Having wonderful teammates behind you makes it easy to get through these tough times.”

The Cobbers final six conference games are against Hamline, St. Mary’s and Augsburg.  Hamline and St. Mary’s are tied in seventh place, while Augsburg sits in last. The schedule isn’t too daunting, but nothing can be taken for granted as there are only three points separating second through fifth place in the standings.

Julius’ goals for the rest of the season reflect the team’s feelings as well.

“My goals for the rest of the season are to have a home ice advantage for playoffs and to capitalize on every opportunity I have in front of the net to put the puck in the back of the net,” she said.

Dold wants to finish this year on a high note, and she explained the mentality the team needs to lock up crucial home playoff game.

“Just to keep going and not let up. It finally hit me that I’m a senior; it’s my last go at hockey, and I plan on going out with a bang.”