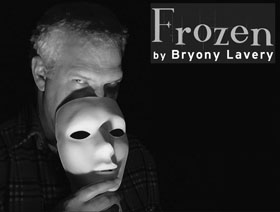 “Frozen” is showing at Theatre B.

Fargo can seem like a frozen tundra at times, a desolate, isolated landscape that is not only physically cold, but has the power to strip us of social contact beyond the warm confines of an academic building. A smile is hard to detect between the layers of a scarf; a wave is hard to muster when even the idea of exposing one’s bare hand can be painful.

This tundra is comparable to the arctic mind of the serial killer, according to “Frozen’s” fictional character, Agnes, a forensic psychiatrist presenting her thesis in England. Devoid of emotion and warmth, remorse and guilt, it is this mental environment that allows Ralph, the play’s serial-killer, to feel nothing.

Written by Bryony Lavery and directed by Jennifer Thomas, “Frozen” is the story of a psychiatrist, a serial-killer, and a mother whose daughter was murdered.

Ralph felt nothing when he killed his first victim, his second, the third, fourth, fifth, sixth and the seventh—a 10-year old girl by the name of Rona Shirley, daughter of Nancy Shirley.

Before Nancy learns of her daughter’s death, she becomes a public speaker, working for an organization that brings together parents whose children have gone missing. After the police locate the body and her daughter’s death is confirmed, Nancy becomes hardened, groping through the white haze for a way to cope.

Meanwhile, forensic psychiatrist Agnes works with Ralph, applying her research on the mind of the serial-killer. Her thesis explores motives and the killer’s moral compass, the essential question being: Are their actions evil or are they the result of illness?

In order to explore this controversial question, Agnes’ character goes back and forth between her examination of Ralph and the presentation of her findings. The division and seamless flow of these acts are facilitated through the positioning of props and lighting.

A table lies on the right side and an open space on the left. Agnes examines her patient at the table, testing the findings of her research (jerky movements as the patient swivels head, the inability to look up without moving one’s head, etc.). As Agnes assumes the role of presenter, the spotlight follows, shrouding Ralph and the table in darkness, the scene on pause.

Throughout these scenes, we learn that Ralph, like many serial-killers, has suffered extreme abuse during childhood—neglect from his mother and abuse from his stepfather. Not only does this give the audience perspective, Lavery also presents an opportunity for one to empathize with the killer. This again begs the question, are the serial-killer’s actions forgivable?

Agnes, the psychiatrist, feels her own sense of stagnation as well. A colleague of hers dies just when they were becoming close. Her emotional bouts cause the audience to question her mental stability throughout the play. However, Lavery’s message is that we are all prone to becoming stuck, frozen with grief, anger and frustration at points in our lives.

The question one must ask oneself in times of emotional distress is whether or not to remain in that state—frozen. Can one find a way to feel empathetic towards a serial killer? Is it possible to start over again after the death of a loved one?

This message stays suspended in the audience’s minds as they exit the venue. More so than a large stage production, Theatre B’s small setting creates a sense of intimacy with the actors on stage. Utilizing only a table with two chairs, a bench and a few other props, the inventiveness of the director, coupled with lighting and sound cues, create a very realistic experience.

If one has any interest in theatre or is seeking a night of entertainment, “Frozen” will be sure to catch one’s attention. Not to be considered light subject matter, the play’s inventiveness and exploration into a rather hard-to-answer question create a production that is worth seeing.