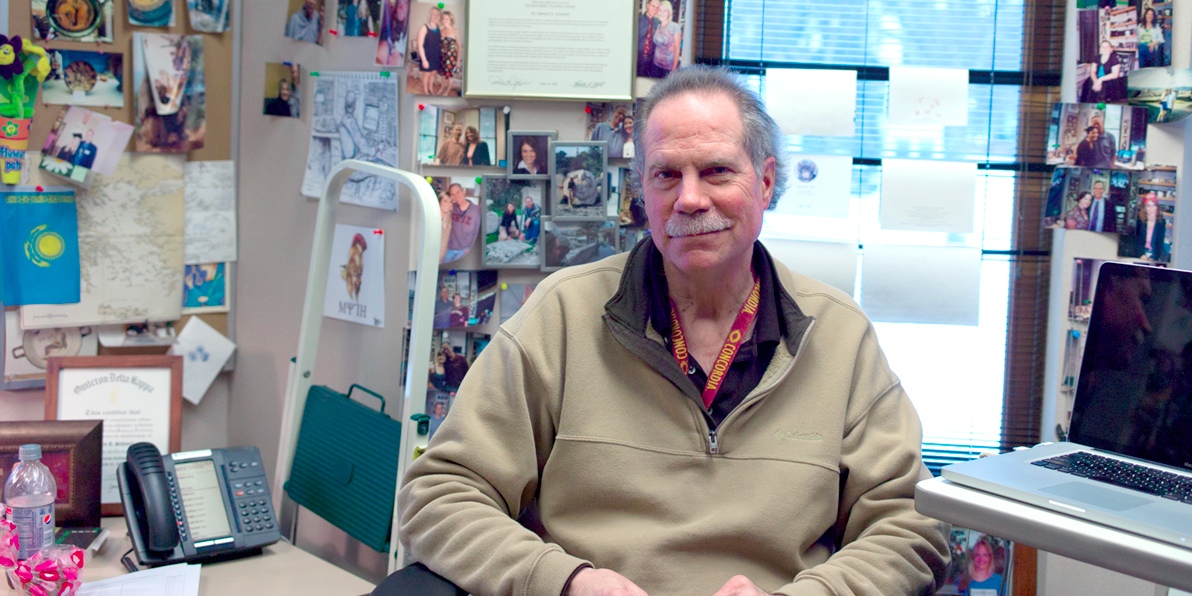 Natural light flowed in from nearly every direction of Edward Schmoll’s semi-circular office. Books ranging from “Basic Works of Aristotle” to Taber’s Encyclopedic Medical Dictionary lined the shelves of his office.

A box of Saltine crackers  sat atop a pile of Kodak Carousel Slide Tray boxes, a Montana Grizzlies clock ticked softly on the wall, and photos of of Schmoll and past students decorated the walls.

Schmoll has been teaching in the classical studies department at Concordia for the last 23 years, and Schmoll has become an integral part of the campus.

Schmoll is a graduate of the University of Montana– Missoula, as proven by the clock on the wall and the water bottle resting on the bookshelf. After noticing this, I asked him a simple question: “Are you a Cobber or a Grizzly at heart?”

“Both are my homes, and I wouldn’t teach anywhere else,” he said. “I love it here.”

This response would come up repeatedly throughout conversation: “I wouldn’t teach anywhere else.”

Schmoll didn’t plan on becoming a professor when he graduated from Montana.

“I never wanted to set foot on a college campus again,” he said. “I was tired… funny how things work out.”

In his mid-20s, after spending some time working, Schmoll went to graduate school. He went without any expectations of a job at the end.

“I figured if I waited any longer, I wouldn’t have the chance to do any of this,” he said.

Thirty years later, he found himself in the teaching business, and seven years after that, he made his way to Concordia’s campus, temporarily filling in for another professor. It was a two year agreement, but by the end of his term he was asked to stay.

Now in his twenty-third year here, it would be modest to say that Schmoll has made an impact on the Concordia campus.

From his teaching style to his personality, Schmoll is quite unique.

“He is very knowledgeable about his subject,” Summers said. “It’s hard to find anyone who knows more about the language… he has dedicated his life to it. He’s a very easy person to relate to– doesn’t make you feel intimidated in class, either.”

Heather Gruber, professor of classical studies, has been friends with Schmoll since 1995 and was a student of his when she attended Concordia. As a student, she got along well with his teaching style.

“He is able to use his personality as such an important part of his teaching style,” she said. “It’s a lecture course, and he’s just up there talking, telling interesting stories, and analyzing myths in a fascinating way that are just kind of part of his being. Thinking about myth is just part of Schmoll’s very being, and people that study with him just tap into that.”

Schmoll also provided his take on his style of teaching.

Teaching is “either the function or result of the kind of person you are,” he said. “If you are gregarious or outgoing or mischievous then that usually finds its way into the classroom. I like to think that I talk with my students [rather] than at them. That’s just the way I do it.”

Gruber and Summers were also able to highlight one of Schmoll’s quirks that they enjoy: his love of cats.

“He loves cats. Loves, loves, loves, loves cats,” Gruber said. “His cat Fritzy is the star of every class. Every student knows the name. He even blew up a giant poster-sized picture of his cat and brought it into the Latin classroom. Students will pat his head for good luck.”

Summers was also quite familiar with Fritzy.

“He’s a mane coon cat named Fritz,” Summers said. “Whenever there’s someone worried about his test, he’ll say that it’s easy enough for Fritz to pass it. Often I end up being dumber than a cat, kind of a double-edged sword, but what can you do?”

Schmoll’s openness to knowing his students seems to foster the relationships he has built. No matter what class he is teaching, he likes to get there early just to visit with the group, and they come to his office to visit and sit in a special chair that he reserves for students.

The chair, black leather with a comfortable pillow on it that Schmoll brought for students, belonged to Olin Storvick, who began teaching in 1955. When they told him that they were going to get rid of it, he told them that he wanted to keep it. Since then, it has served as a place for students to visit.

“Probably a more valuable commodity than the advice I give to them,” he said.

Over the years, Schmoll has made many close connections with students and faculty members on campus. It is evident in the pictures that line his walls, the many “hellos” that he gives out to students in the Maize on his daily walk and fond words of Schmoll that seem to make their way into everyday conversation.

“He has a very winning personality,” Gruber said. “He is very avuncular—he’s everyone’s favorite uncle, and my experience is that he strikes a lot of people that way.”