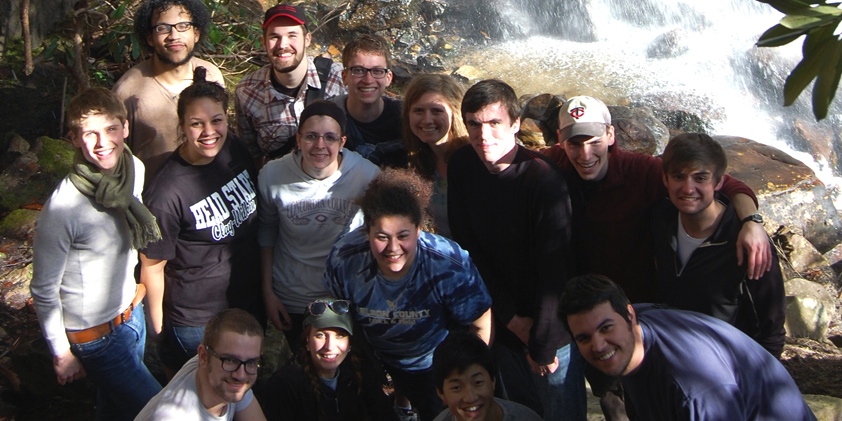 When he saw the sign, he knew he couldn’t go in. Neon blue and fluorescent white lights hung in the front window of Jabo’s State of Mine, proclaiming the Hazard, Ky., restaurant a “Friend of Coal.” Though he is many things, that’s one thing McKinley Sumner is not.

Mountaintop removal mining has destroyed the land surrounding Sumner’s property – 69 acres tucked away in a narrow part of Montgomery Holler, where he has lived for 78 years. He has lost friends, resources and energy over the fight against MTR, and he’s not going to quit anytime soon. Sumner, whose white wisps of hair barely cover his balding head, looked around the parking lot and saw the group of Concordia College students pile out of two vans.

“We’ve got a problem here,” Sumner said, his mountain drawl shaky, as the group approached.

They were supposed to go into the restaurant to hear stories about his battle against surface mining in Appalachia. His comment was met by a confused look from the group.

“You see that sign there?” Sumner asked. “I can’t go in there and talk to you all. They’re friends of coal.”

The 15 Concordia students and advisor Karis Thompson spent spring break traveling around eastern Kentucky on an environmental and social sustainability trip designed by senior Nathaniel Cook. In line with the college’s commitment to sustainability, the trip provided experiential learning through the multiple, complex issues involving MTR.

The complexity became evident there in that parking lot, especially for senior Ryan McAdam. The group did eat lunch inside Jabo’s; Sumner, too, but he only drank a sweet tea with lemon. His gold glasses frames droop to the right a bit and rest lopsided on his face. He looks plum tired.

“It blows my mind that he can’t go into a restaurant in his own town and feel comfortable,” McAdam said later. “But now I understand the dependence on coal in the area. It’s not so much a dependence on coal itself, but just the fact that they need money. It makes sense that people would be upset with him in there. It’s the reality of their life.”

The controversy about MTR runs deep. Jobs in the coal industry are some of the only jobs around, so many Kentucky folks support mining. At a stoplight, it doesn’t take long to search for a vehicle with a “friends of coal” bumper sticker, or a window decal reminding other drivers that “coal keeps the lights on.” National demand for coal as a cheap energy source keeps the industry active. But the issues arise because MTR destroys Appalachia’s diverse ecology, contaminates clean water with harmful minerals and halts socio-economic growth.

Eastern Kentucky is one of the poorest regions in the country. Nearly 17 percent of the state population lives in poverty, according to Community Action in Kentucky. If poverty were a county, it would contain 684,000 residents, more than the entire population of North Dakota.

A small percentage of the wealth generated by coal stays in the communities where it was mined. Coal companies are owned by a small number of wealthy individuals, and the money they make is not being used to improve infrastructure, education, or health of mining communities. This doesn’t make any sense, according to best-selling Appalachian author Silas House.

“Where most of the money comes out,” he said, “the people are the poorest.”

The group met with House at Berea College in Berea, Ky., to learn more about the role of art and students in MTR activism. He explained that one of the main reasons he thinks the push to end MTR has not gained momentum as a national movement is because many of the people affected are living below the poverty line. This devastated senior trip member LaCresia King.

“It was hard seeing how poor these counties are, and how they’re not benefiting from something that is worth so much money,” King said. In a few weeks, King will graduate with a degree in social work. “I want to work with that on a micro level, getting immediate help for those families,” she said, “and a macro level for movements as a whole, whether that be MTR, or oil in North Dakota, inequalities in Minnesota.”

The true cost of coal

Over half of the United States’ energy comes from coal, according to the United States Department of Energy. U.S. guzzling of energy translates into a large demand for coal, which has caused the industry to increase production efficiency and find new, faster methods for extraction, like MTR. This form of surface mining uses explosives to blast off the summit ridge of a mountain to get at the shelves of coal beneath the surface. The seams of coal are removed while the spoils are placed in a neighboring valley.
Sludge, a thick dark liquid filled with dangerous metals like selenium that results from washing the coal, is left in pools by the ton. This material leaks into the ground water, making running water undrinkable. Dust from the blasts floats down into hollers, and sulfur enters streams, changing once fresh water into an orange flow that stains clothes and sinks.

There are a few loose guidelines that regulate how coal companies take care of the waste they create, and though each MTR site is supposed to be reclaimed, or replaced with native vegetation, few ever are. When a company does replant, they usually lay non-native grass that chokes out species from our country’s most bio-diverse region. When the coal is mined in one area, companies take it and leave – with them, the heart and health of Appalachia.
“MTR is not just destroying land,” said Jason Howard, who co-authored “Something’s Rising” with House. “It’s also helping to destroy a culture.”
The students also met with Teri Blanton, who has worked for 19 years with a non-profit organization, Kentuckians for the Commonwealth. KFTC raises public awareness about MTR, among other issues, using grassroots organizing and lobbying. Blanton told the group that
in the Appalachians – the oldest mountain chain in the world – over 550 mountains have been destroyed since the coal industry made the switch to MTR from traditional deep mining.

Close to 30 of those have been lost around the home of Daymon Morgan, an octogenarian who has refused to sell his land to coal companies, even for numbers exceeding $100,000. His property is the only green mountain for miles – each of his neighbors has sold out. The group hiked behind Morgan’s six-wheeler as he pointed out chestnut and birch trees, his pride in his land evident.
Morgan practices herbology with the wild plants he finds growing on the mountains behind his home. Thompson, associate director in the Office of Intercultural Affairs and adviser for the trip, rode with Morgan, who later gave her some birch bark to brew for tea.

“That mountain tour with Daymon [was the highlight of the trip.] His generosity in engaging with a stranger,” she said while reflecting on the trip. “It was incredible.”
The group ascended the mountain, and as the sun sunk below the peak, they reached the top. Cheerful chatter cascaded into silence, then. Gone were the views of chestnut and birch, long grass and shrubs. Instead, the adjacent mountain stood exposed, naked. Tracks from the huge machinery were still visible in the brown, unreclaimed mud. From the summit edge, the view shocked freshman Kelly Knutson.

“It felt as if someone had knocked the wind right out of me,” he said after the trip. “It’s one thing to watch documentaries on the issue but mind-blowing to witness it spread out before you.”
Knutson understands the complexity surrounding MTR, though, and knows it’s not fair to simply say it’s all bad.

“It took a while to process,” he said, “but I realized that for some, [MTR] was the only way to survive and provide a roof over their heads and put food on the table.”

With a deeper understanding of Kentucky coal, the Concordia group traveled to Frankfurt to help members of KFTC lobby for the Clean Energy Bill, which is a first step in helping the state gradually diversify where Kentucky gets its energy. Right now, 93 percent comes from coal. Tonya Turner, a KFTC member, represented the group in a meeting with state senators. She came out in tears, which deeply unsettled freshman Rachel Pishtek.

“When we were at the capitol,” she said, “I was so disgusted by the fact that we had been with these KFTC people who had worked so hard to put on this presentation, and it went horribly. I felt so much sympathy for [Tonya], because people are blowing the coal issue under the table.”

A political science major, Pishtek admired the determination of the KFTC members who went head to head with the legislators at the capital to fight for something they believe in.
“They just keep going,” she said. “Like they know that someday, something will change. That really inspired me to try harder to push the things that I believe.”

Student activism plays a big role in the daily lives of students at Berea College; the Concordia group spent an afternoon learning about the initiatives they’ve started to eradicate MTR, among other prevalent issues in Kentucky including homophobia, bullying and racism. Willie Dodson, a Berea fourth-year student, explained that sometimes, people looking in get their activism all wrong.

“We encounter the myth that it’s outside environmentalists versus coal miners, that it’s tree huggers versus coal,” he told the group. “That’s bull shit.”

Concordia senior Skyler Vilt felt invigorated by the time with Dodson and several other active Berea students. The passion he noticed within them made him want to move to a place like Berea after graduation.

“If you didn’t know any better,” Vilt said, “you’d think Kentucky was a hotbed of activism and radicalism. But that’s because it is. You just don’t hear about it.”

Similarly, senior Julie Arnold was impressed with the Berea students’ deep connection to their home state. As someone who hopes to work with her parent’s organic farm, she understands the desire to use your talents to improve the community you came from.

“I really value that sense of place that people have,” she said.

That deep-rooted feeling is exactly what keeps McKinley Sumner from losing hope in saving his land, and Daymon Morgan from selling out. It makes Tonya Turner put her head down and try again another day at the capital, and it uprooted fifteen college students from their own place to try and grasp that of Appalachia.

“The people had such warmth, authenticity, and a boldness,” said Thompson after the trip was over, “almost a recklessness. The idea that you would maintain a mountain for the sake of the mountain, for the sake of your community and your family – it’s incredible.”

An evening presentation on the Appalachian experience is scheduled for Tuesday, March 27. The event is open to the public.

Notice: This presentation has been moved to Tuesday, April 3 at 7 PM in Jones Science Building room 212.