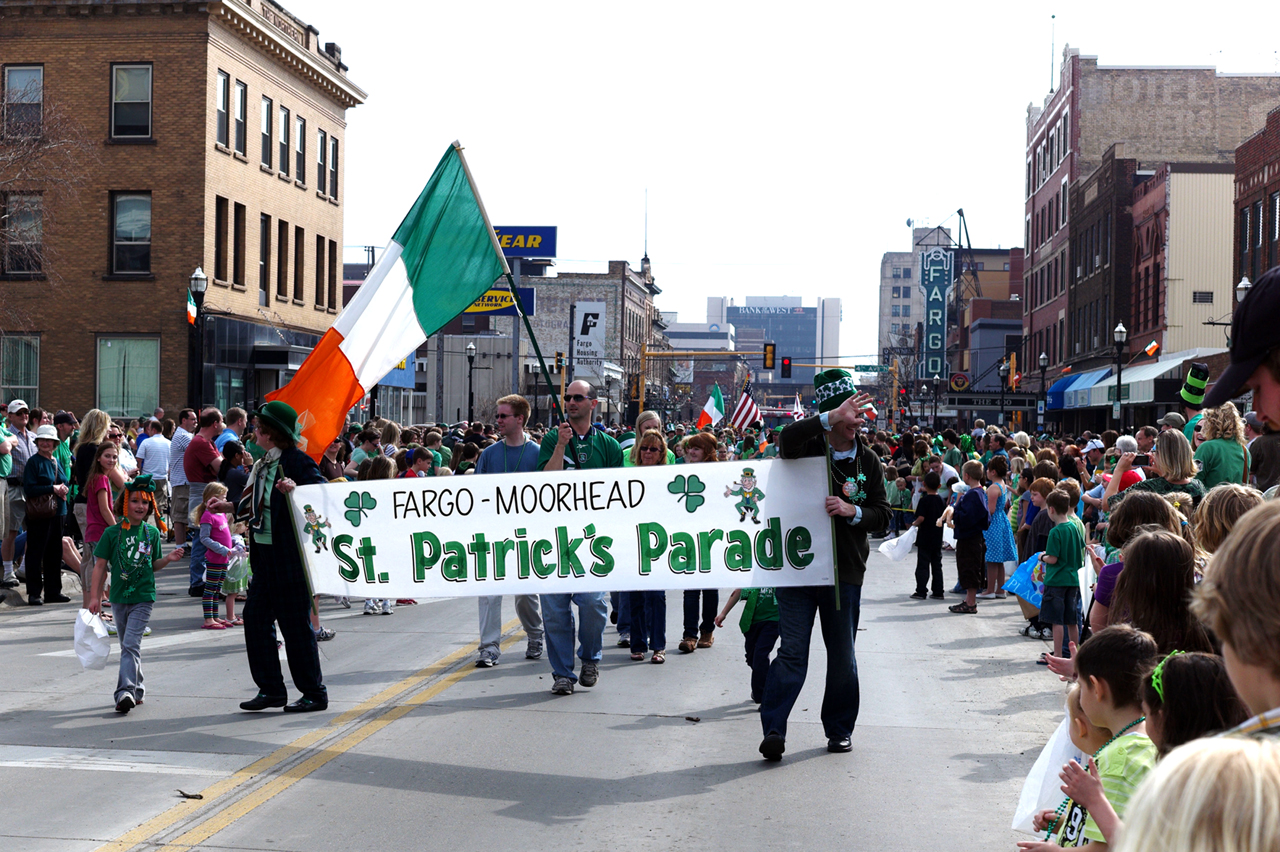 For the first time in years, the annual Fargo-Moorhead St. Patrick’s Day Parade was held Saturday, March 17, the actual weekend of the Irish holiday. The city’s population ventured to Broadway in Fargo, creating a sea of green attire and “Kiss me, I’m Irish” t-shirts.

The first St. Patrick’s Day Parade in Fargo was held in 1996. It started with a handful of Irish families and a couple of local businesses who wanted to celebrate their heritage. Since then, the festivities have grown tremendously each year. Last year the parade attracted around 5,000 people, and the beautiful weather this year made it an even bigger success. The parade planning committee said they are in awe at the success the event brings each year.

The parade is made of Irish Dancers, family and business floats, Irish folk bands and, of course, lots and lots of candy.

Fargo is not the only city where Irish celebrations are popular on March 17th. The first parade in honor of St. Patrick was actually not held in Ireland but in New York City in 1762. The parade took place to honor Irish immigrants and soldiers with the purpose of reconnecting them with their heritage. Today, major parades still are popular in Boston, New York and Chicago, where the Chicago River is dyed green in celebration.

The Fargo parade started at 3 p.m. near Broadway and over 80 different groups walked the street. Children lined the streets with their hands outstretched, collecting as much candy as possible. The Fargo VFW Honor Guard led the parade followed by the Heather and Thistle Pipes and Drums. Other festive bands, such as The Dirty Hurlers Band, also played live Irish music in the US Bank parking lot.

“St. Patrick’s Day is for everybody, everyone is Irish that day… no matter what,” Fargo Mayor Dennis Walaker said.

His comment rings true, as many claim their roots through at least one ancestor.

“I have a great, great grandfather from Ireland,” said freshman Elizabeth Clapp, when asked about her roots. Clapp attended the parade and wore green.

“It felt like being in a mini Ireland in Fargo, North Dakota. The amount of people coming together to have a parade was exciting,” she said. “I would definitely love to come and celebrate downtown next year as well.”

The Fargo Parade is sponsored and supported by many businesses downtown, such as Josie’s Corner Café and Bake Shop, which hands out gift certificates during the parade. The VFW is one of the biggest sponsors and also operates at the parade headquarters. Other business sponsors include Bennigan’s, Duffy’s, Kennelly and O’Keefe Attorneys, Rooters, Old Broadway and many more.

“We try to keep it downtown and family-run,” parade committee member Dan Mahli said. “We want to keep it free, fun and family oriented.”

Other events that occurred downtown during St. Patrick’s Day included the Lake Agassiz Pacers 5K race and a concert by Skilly and Duff, an Irish Folk Group, at the Fargo Theatre in the evening, raising money for the Emergency Food Pantry’s Relocation Drive.