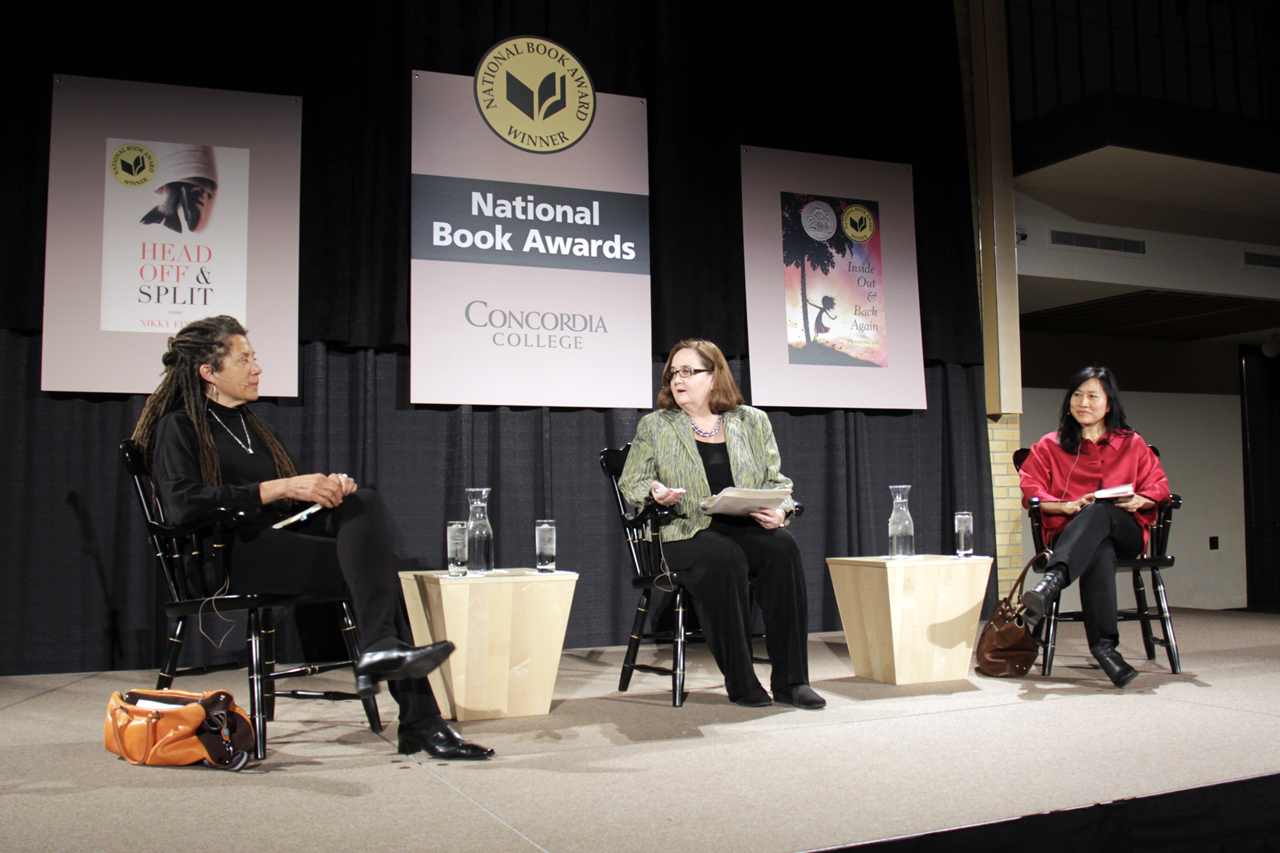 When Nikky Finney, the 2012 National Book Award winner for poetry, was asked why coming to the National Book Awards at Concordia was so important to her, she simply shook her head, pointed to the long snaking line of fans eagerly waiting behind me to meet her, and whispered, “That.”

According to Augenbraum, college events like this are important because they allow campuses to be exposed to contemporary writers and to put a face to them. By doing so, “even writers of the past become more immediate,” he said.

The guest authors took turns throughout the night explaining the motives behind their books and the paths they took to becoming authors.

Lai, who majored in journalism, eventually found it to be “so unbelievably boring” that she decided to give fiction a try. But even after that decision was made, it still took a long time for Lai to become the writer she is now.

“It took decades—it just took forever,” Lai said. However, the shift seemed inevitable for her.

“If you begin to read, at some point, you’ve got to write. It just happens,” she said.

Lai was born in Vietnam and at the end of the Vietnam War moved to Alabama with her family at the age of 10. Her winning book, “Inside Out & Back Again,” is a novel in verse, and it tells the story of a 10-year-old girl named Hà who moves to Alabama after the Vietnam War. This is her first book.

Throughout the struggles of learning a new culture, Lai said that the most rewarding thing was reclaiming the power of language.

“It was so satisfying,” she said. “When you re-claim language, you really re-claim yourself.”

When she found out that she won the National Book Award for her book, the only word Lai could find to describe it was “surreal.”

Finney told how it was her mother and grandmother who taught her to love books. She recalled pointing out to her mother that there were no books about black people in the library.

“I guess you’ll have to write them yourself,” her mother told her.

Her winning book of poetry, “Head Off & Split,” contains an array of poems about the emblematic figures and events in African-American life, and, as Finney said that night, she does not shy away from the topics of politics or other difficult subjects.

“We have to be able to talk… one-on-one about the things we don’t agree with,” Finney said.

Both authors agreed that it’s impossible to separate politics from their writing because politics happen to people in history.

Despite Finney suffering from laryngitis, she still whispered a captivating reading at the end of the night and stayed to sign autographs and talk with students.

“People come out to hear poetry,” she said. “I want to be there to represent that tiny book I love so much.”

Junior Matthew Bergquist went specifically to hear Finney’s perspective on poetry and to learn “how she became such a wordsmith.”

“It was a matter of her being empowered,” he concluded.

The evening’s events inspired him to seek new opportunities for writing and to find things to write about.

Scott Olsen, an English professor and one of the coordinators of the National Book Awards event at Concordia, explained the process behind selecting the authors to come to campus. He and Tracey Moorhead, the senior associate to the president, travel to the National Book Awards in New York each year. After the awards are presented and Olsen and Moorhead have had a chance to hear the authors speak, they get together and decide who to invite. The college then puts them on the spring schedule for that year.

“The entire process takes about 90 to 100 days,” Olsen said. “That’s a fast turnaround for any major event.”

But according to Olsen, the event is worth it, which he referred to as “one of those extraordinary things at the college.”

In today’s fast paced, technological world, the large crowd that gave the authors a rousing ovation at the end of the night spoke loudly of how deep the written word still impacts us. Finney wanted to give words of encouragement to Concordia students who want to pursue a life of writing.