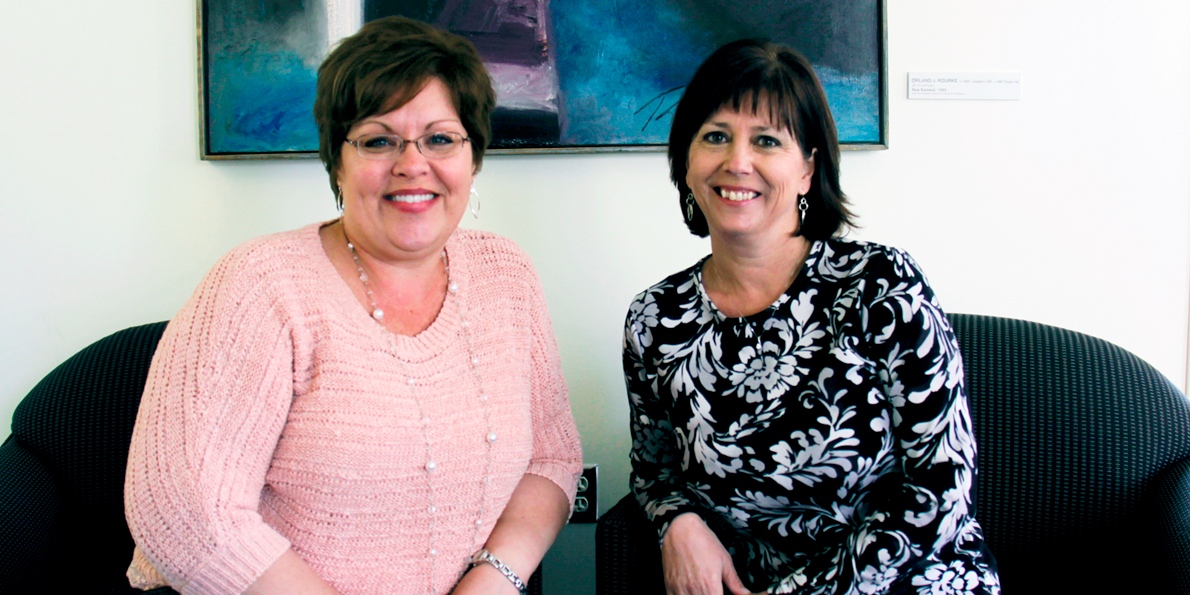 Office Manager Karen Bertek is looking forward to one thing about her new home in the Parke Student Leadership Center despite the impending stress surrounding the Student Affairs office’s upcoming move.

“It’s nice that I don’t have her making fun of what I wear,” Bertek says, glancing toward her partner in crime Deb Mund. “When I come into the office, she always critiques my outfit.”

“Yeah, she wore pink pants one time,” Mund laughs. “That was a really good one.”

Leaning back in her chair, Mund pulls out her phone and searches for the photographic evidence. Sitting in the glass conference room of the Parke Student Leadership Center, the two take their usual positions at the large conference table. Mund on the left, Bertek on the right. Exchanging glances, they smile, eyeing the construction workers through the open door as they pass with tools, paint cans and brushes in hand.

“They were pink pants,” Mund resumes.

“And a black vest,” Bertek says.

“So she takes a picture of me with her phone and sends it to all of my friends,” Bertek says, “and asks [them], ‘What do you think?’”

“All of these comments are coming back, and they all agreed it was too much pink,” Mund says, laughing.

“Well, I bought [the outfit] in Florida,” Bertek says, examining the photo saved on Deb’s phone.

“Yeah, that’s where all the old people live,” Mund exclaims. “And they wear pink pants!”

Although their choice in fashion may not be completely in sync, for the past six years Bertek and Mund have worked together in the Student Affairs and Residence Life office tucked in the left corner on the main floor of Lorentzen Hall. The two roommates have seen it all, tackling projects large and small, including the daunting task of assigning all the first-year students roommates. As office manager, Bertek heads up the needs of Student Affairs and assists Director of Student Support and Orientation Lois Cogdill while Mund serves as a resource for the Director of Residence Life, Jasi O’Connor. In their roles, the two shared an office and worked very closely together.

“They literally were roommates,” O’Connor said. “Their desks were about a foot away from each other.”

For more than half a decade they worked together in the small corner office, dubbed the Student Affairs suite by Bertek and Mund. With dated desks and a small reception area, each was in quick walking distance of administrators and other offices nearby.

Working so closely together during that time, the two forged a strong sense of camaraderie.

“It’s basically been the Deb and Karen show all these years,” Mund said. “And everyone just has to do what we say.”

As the first point of contact for students coming into the office, Bertek and Mund have always worked to keep the office’s mood warm, comfortable and above all inviting for students, despite the often serious nature of the tasks assigned to the Student Affairs, Cogdill said.

“We’ll go the extra step to make students more comfortable,” she said. “We want to be as approachable as possible.”

Both Bertek and Mund had worked on campus in different offices before coming to Student Affairs. Bertek began her Concordia career at the campus information desk in 1993 before transitioning to Student Affairs in 1998, where she later became the office manager. Mund came to Concordia in 2005 and worked for a year in Academic Affairs.

“The whole time Karen begged me to come down to work for her,” Mund said. “There was an opening, so I applied and was hired.”

While they are both the first to admit that their personalities are very different, they have a similar sense of humor that complements each other well.

Both have had children attend Concordia in the same time span, so they can relate to the challenges that parents and students can face.

Working so closely together and with O’Connor and Cogdill, the Student Affairs office was a close-knit and supportive community.

Because of the diverse types of issues handled by both departments, their office was always very busy. Through their teamwork, the team worked to meet the needs of students, faculty and professors. To help aid in completing projects, covering breaks and vacation time, both Mund and Bertek were cross-trained to meet the needs of either department, Cogdill said.

“They just knew each other’s job so well,” Cogdill said. “They stepped in for each other all of the time. It’s to the point that one can complete the sentences of the other.”

Despite their comfortable atmosphere in their current location, the Student Affairs team was shocked to find out this past fall that they would be moving to a new home. Within a few short months’ time, both offices would make their way to the Parke Student Leadership Center. Although the move was surprising, the most jarring aspect was discovering that for the first time in six years, Deb and Karen wouldn’t be working right across from each other. Although they would be in the same location, the two would no longer be roommates. Instead, they’d be floormates.

“Early fall was when the decision was made,” O’Connor said. “That was pretty much all that we were told. We were given very vague details. No plan was established for the actual move logistics.”

Once the news was official, the team found many pros and cons associated with their transition to a new and very different location. Being relocated to the heart of student activity on campus, the departments would be more connected directly to what was going on in the college community. Their new home will also be more convenient and less intimidating than the previous Lorentzsen Hall accommodations, O’Connor said.

The move is also fraught with drawbacks. From losing the close connection to the administrative offices that both Student Affairs and Residence Life work so closely with in Lorentzsen to the potential loss of the privacy associated with their previous location, there are numerous challenges ahead, Cogdill said.

“Our major concern [with the move] is maintaining privacy and confidentiality,” Cogdill said. “It’s important to remember that not everything that Student Affairs deals with is positive.”

After Christmas break, details about the move became much clearer. With contractors signed to remodel the Parke Student Leadership Center, the timeline for the actual move was set in stone. O’Connor was the first to move across to her new office in the Parke on February 20, she said. Mund followed a month later, leaving Cogdill and Bertek behind to wait until the remaining offices spaces are completed.

Although they knew that the move was coming, it was still a hard transition to deal with.

“We did shed tears when I moved to the Parke,” Mund said. “It was really hard.”

Despite their distance, the two have found ways of staying in regular communication. Through instant message communications, they can still keep up with their inside jokes.

“We’ve been keeping a running list of jokes for our retirement party,” Bertek said. “So we can roast each other.”

However, because of their new central location on campus, the staff is looking forward to being more connected to students. Cogdill said it’s always been their strength and what they look forward to most about their jobs.

“[Deb and Karen] are absolutely incredible in how they work with students,” Cogdill said. “They will always go out of their way to do what they can.”

Perhaps that is the greatest bond that the two share. Although they have several strong ties in common, they are both unified in their passion for their jobs and the college.

“We really love the college,” Mund said. “Everyday is different. I don’t think that there’s ever been a day that I didn’t want to go to work.”

Bertek agrees, finding that despite the challenges and drawbacks associated with the position, there’s a reason she’s stayed all these years.

“While I hate getting up early in the morning, I’ve never dreaded going to work,” Bertek said. “Some things are frustrating, but it’s all worth it.”

A senior majoring in Political Science and Communication, James hails from Omaha, Nebraska. He focuses primarily on the unique things that define our everyday lives.