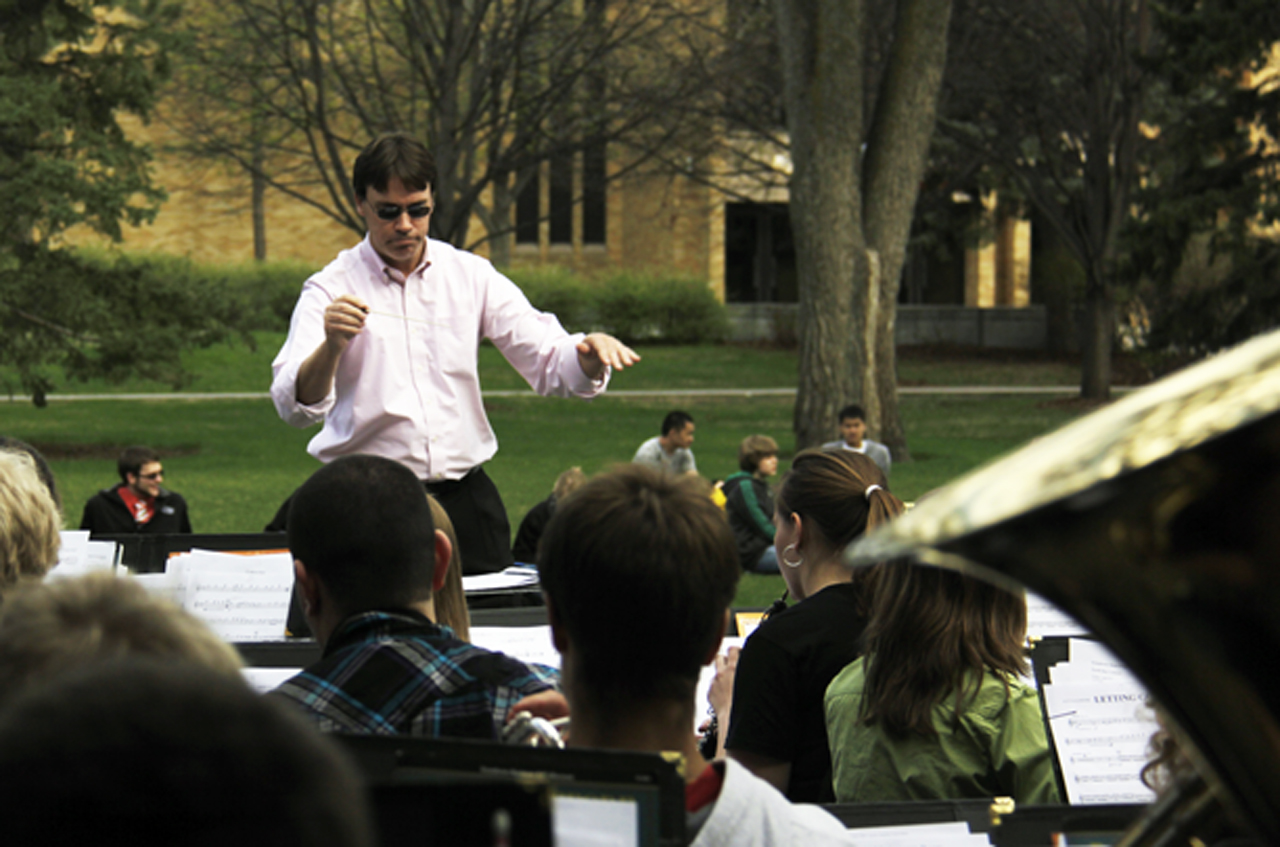 The Earth Day Concert’s major obstacle was Fargo-Moorhead’s rather unpleasant weather. That, however, proved insignificant as April 20s weather was suitable for the Symphonic Band to perform outdoors in front of the Frances Frazier Comstock Theatre.

“We have had outdoor concerts held before in the summers,” said Nathanial Dickey, director of the Symphonic Band, “and then there is also Cornstock, but this is the first time one of the large ensembles has played outside.”

Anyone passing by between 4:15 p.m. and 4:45 p.m. would have been shocked at the unusual view of the large ensemble, made up of about 70 students, strumming away.

For this event, Dickey worked with the Student Environmental Alliance, in particular with junior Sarah Vlasak, treasurer of the SEA and bassoonist in the band. Unlike most events on campus, the concert was not one that had been in the pipe lines for a very long time.

“Planning started about a month ago,” Vlasak explained. “But due to logistics, it did not come to play until a week ago.”

Dickey also described the concert as more of a trial run, something that he had been imagining for some time as a result of his experience at Harvard.

“The concert is an experiment,” he said. “I have always thought of having a spring concert here on campus. I was the Assistant Director of Bands at Harvard, and they had Arts First every year.”

He described Arts First as an outdoor festival held every spring dedicated to celebrating the arts.

With the various events planned for Earth Week by SEA, Dickey saw this as a means for this dream to be realized.

Songs performed during the 45-minute concert had no relation to nature or the Earth, but they did include two student compositions: “Unknown” by freshman Jasmine Schafer and “Letting Go” by junior Jared Hoeft.

Dickey said that if the concert was a success, probable future events will contain compositions that would be more relatable to Earth week. He further stated that feedback from students and the audience would be a factor in knowing whether to make it an annual event.

If that is the case, this concert may be held next year as the sizable audience that contained not only students but faculty alike was rather impressed by the event.

Colleen Hyde, a technician in the Biology department, was one such person.

“I loved it. I wish we had more music outside in this area,” she said. “It is nice to get close enough to the band, and you feel more a part of the audience.”

She was also impressed and stated that she was “fascinated with the fact that they linked up with Earth Week, that they decided to honor Earth Day.”

Vlasak also saw the event as a success, especially since it was a first.

“It brought in a diverse group of people, which is what SEA is all about,” she said.

Speaking as a band member and not an SEA member, she also expressed the views of the band on the concert.

“There are people from the band who think it is a good idea,” she said. “They would be more comfortable with the idea if there was more to do with nature.”

The aim for this first Earth Day concert was purely for entertainment purposes, according to Dickey.

“The main thing was to play fun, festive music that will get people entertained,” he said. “A sense of enjoyment of spring and Earth Day.”

That being said, the brilliant weather along with the upbeat music of the Symphonic Band had the audience sprawled out and relaxed on the grass.

2012-04-27
Previous Post: Life in public housing
Next Post: Bussie to introduce Forum on Faith and Life to corporation