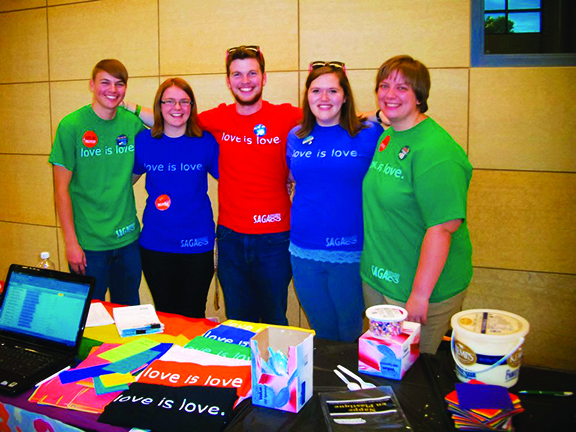 A Concordia student has gone public about her plans for a t-shirt campaign during National Coming Out Week to counter what she views as the majority student body attitude towards homosexuality.

This issue exploded a few weeks ago when Facebook notes and blog posts written by senior Rebecca Julius went viral. She published her conservative views about homosexuality and plans to wear a T-shirt with the phrase “Sin is Sin” (parodying the “Love is Love” T-shirts worn by many supporters of LGBTQ rights) during National Coming Out Week (Oct. 7 – 13) .

Julius said she never intended for her comments to get this much publicity.

“It has definitely gotten a lot more attention than I anticipated,” Julius said. She said that for her, this is “not so much a political issue,” but rather more of a matter of needing to fulfill a personal conviction.

“I believe that the Bible is the holy, inerrant word of God,” Julius said. “Being that this is a Christian campus, [open support of homosexual lifestyle] is wrong.”

Julius, whose essay “Be a Witness for Truth” appeared on the conservative blog “Exposing the ELCA,” made the following statement about her opposition to Concordia’s acceptance of homosexuality on that blog:

“Too often today, Christians [who] oppose homosexuality and same-sex marriage are too scared to stand up and be a witness for truth, and simply stand back and stay silent…I’m tired of waiting for someone to ask me my opinion before being able to voice my opposition. I don’t want to be mistaken for a supporter just because I am in an environment where the majority supports this sin. So this year, when my ELCA college puts on its pride week [National Coming Out Week] – covering the campus in rainbow flags, putting on presentations and telling stories celebrating one’s ‘coming out,’ and giving no acknowledgement to the truth of my God’s true Word, I want to do more than refuse to participate. I don’t want to hate, I want to make a stand. It is something I feel that God has put on my heart…”

“I think Rebecca and I would differ on what it means to be a Christian college,” Henrickson said.

However, Henrickson is not apprehensive about having people who share Julius’ views on campus, and said that if anything, she’s “excited” about the conversations Julius’ T-shirts will start.

“I think [SGA’s] responsibility is to facilitate discussion,” Henrickson said. “SGA doesn’t want to be a conversation-stopper.”

But while Henrickson is excited about starting conversation, Julius remains disappointed about Concordia’s and the ELCA’s inclusivity on this issue.

“It’s saddening to me that a church that says they stand for God’s truth is so socially and politically motivated,” Julius said. “I think that the ELCA selectively chooses the parts of the Bible that they want to listen to and believe.”

“People have used scripture in T-shirt form to say exactly what they want it to say,” Megorden said. “So for her to assume that her T-shirt is truthful and that someone else’s T-shirt is sinful is really unfair, I think.”

Megorden also resisted Julius’ idea that having a “socially-motivated” relationship with God was necessarily bad, stressing the importance of God’s call to be in relationship with others, to see God in others, and to love one’s neighbor as oneself.

“To hear someone condemn my friends is really hurtful to me,” Megorden said. “Rebecca is my neighbor, but [LGBTQ individuals] are my neighbors too.”

Megorden emphasized that love is most important in Christian life, and that it’s not up to humankind to define love.

“I disagree with Rebecca that she is the only one who knows what love is,” he said.

“My answer to that,” Julius counters, “is that if the Bible says that something is a sin, then it’s a sin.”

In contrast to Julius’ biblical literalism, however, Megordan also stressed the complexity and ambiguity of truth, even in the Bible.

“It’s really arrogant for us to think that either one of our stories is bigger than God’s story,” Megordan said. “God is infinitely complex.”

Megorden said that this complexity is mirrored in scripture.

“I’ve preached on the same Christmas text or the same Easter text for thirty-plus years, and every time I read that text I discover something new,” he said.

Despite his firm opposition to Julius’ views, however, Megorden stressed the importance of dialogue and of “creating safe places for our disagreements”.

“I think that she represents a conservative, biblical-literalist point-of-view that is held by some people in the ELCA, but is not representative of the Evangelical Lutheran Church in 2012,” Megorden said. “But is there room for that perspective in our church? Yes.”

Concordia President Dr. William Craft agreed that the school should be a place of inclusivity and open debate.

“Concordia College affirms the dignity and worth of all its students…and the entire campus community, straight or [LGBTQ],” Craft said. “We affirm that this is and should be a place where every student who is accepted here, every faculty and staff [member] who works here, should be safe, should be uplifted and supported, and should be able to think his or her way through big and difficult questions.”

Craft said that this included Julius and others who agree with her.

“This should be a place where people can raise and explore these questions with mutual respect,” Craft said.

Citing the recent visit to the Concordia campus by interfaith leader Eboo Patel, Craft maintained the importance of finding commonalities across differences.

“There are times when colleagues and community members and friends need to say, ‘I’ll see you on the other side of the picket line on this one,” Craft said. But, he said, we must continue to ask the question: “What are the ways in which our convictions overlap?”

For her part, Julius said that she opposes anything that compromises her faith, and is thus skeptical of such statements.

“There’s no compromising God’s Word for me, and that’s it,” Julius said.

“Jesus himself said that he didn’t come here always to love on people,” she continued, quoting Matthew 10: 34-36. “He said he came to bring a sword, to pit brother against brother.”

However, Julius said that her comments are not intended to be hateful or judgmental or even to change the minds of her fellow students on this controversial issue.

“My objective is not to judge or to hold myself up on a pedestal, but to just display the Bible verses on my T-shirt,” Julius said. “I’m not out to judge anyone. I’m a sinner too.”

Julius said she feels that Concordia is “incredibly liberal” and sees her views as being very much in the minority. But she feels her views deserve to be represented and heard.

“I’m not expecting a lot of people to change their minds, but I do think my side should be out there and expressed,” Julius said.

“I just want [other people who hold the same view] to know that they’re not alone.”

Julius’ openness with her views has gotten her a lot of attention, both good and bad. Julius said that she has been receiving emails and messages from people who agree with her views and want to give her their support, but also an outpouring of nasty and negative feedback from Concordia students.

“A lot of people are accusing me of being hateful or judgmental,” Julius said. “But I don’t hate anyone on campus. I hope that [those who disagree] will realize that this is motivated by love.”

Concordia’s Straight and Gay Alliance co-presidents, Collin Sullivan and Geneva Nemzek, said they were informed of Julius’ statements by their supporters on campus long before her comments became widely known by the larger Concordia community. Sullivan said that this allowed them time to formulate their own, unpressured response to Julius’ comments. Part of that response was a video posted by Sullivan and Nemzek on YouTube earlier this month. In the video, entitled “A Very SAGA Welcome”, the co-presidents welcome students to a new year of SAGA activities and events, while also discussing opposition to LGBTQ individuals and their allies and also to the negative messages Julius has received for her views.

“SAGA is an organization that stands firmly by the ‘Love is Love’ slogan,” Sullivan says in the video. “Regardless of the hardships we endure, we are continually impressed with the support that we see.”

“That being said,” continues Nemzek, “it is necessary to keep support as constructive and friendly as possible. SAGA strives to promote equality on a campus-wide basis through love and positivity.”

“This requires that we as supportive Cobbers face adversity with a little extra love and care,” Sullivan said. “Fighting hateful words with hateful words only spreads hate, and that’s certainly not what SAGA is about.”

In further response to Julius’ actions, SAGA plans to distribute a second T-shirt during National Coming Out Week tying together religion and homosexuality.

“We have a very solid stance that the two are not mutually exclusive,” Sullivan said.