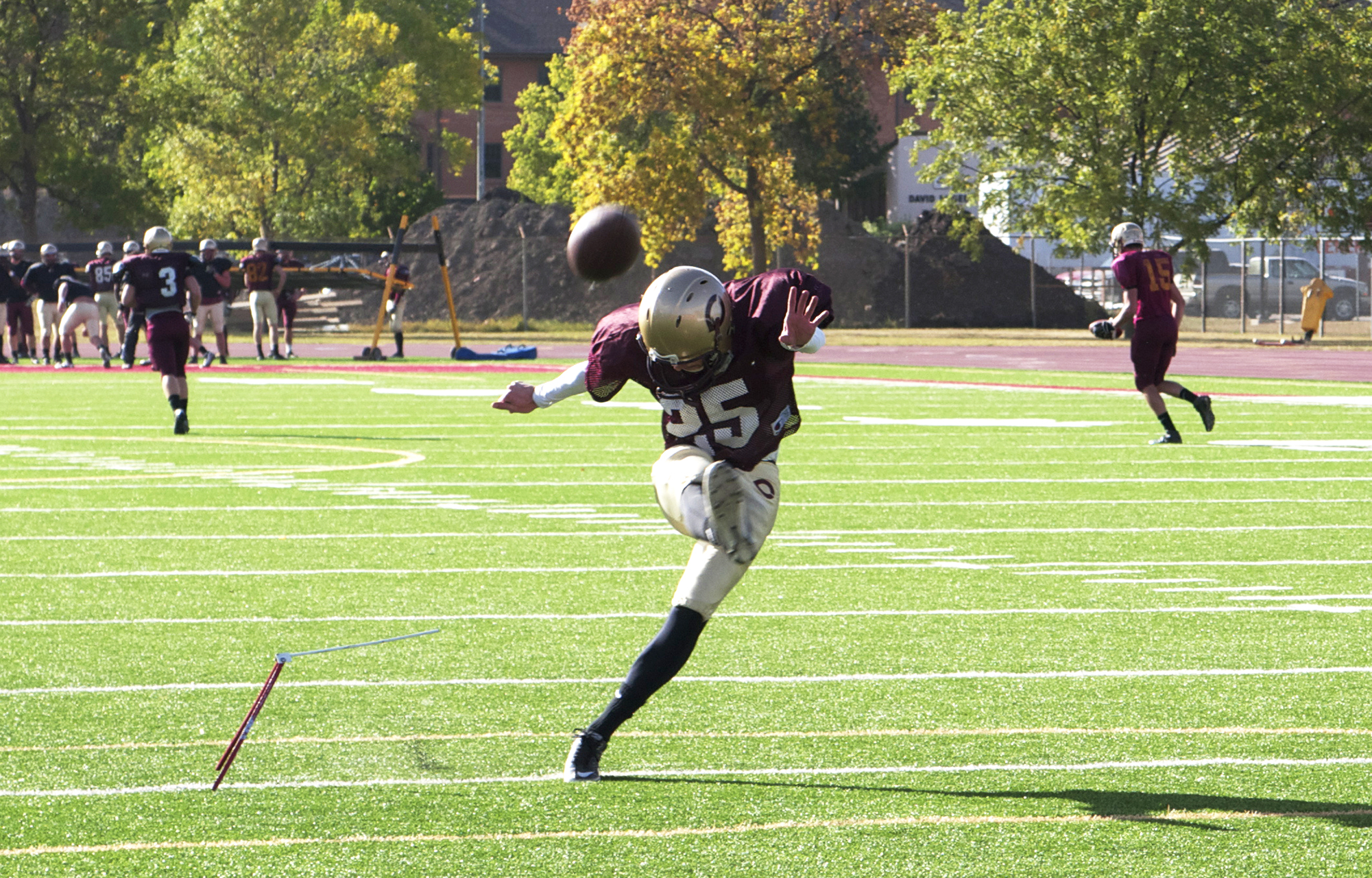 Four thousand miles—give or take a few hundred.  That’s how far away from home junior Ben Wagner travelled to become a student at Concordia.  Wagner, a native of France, had been to the United States twice before enrolling at Concordia—once as a camper at a language camp in Los Angeles, and again as a foreign exchange student in Oregon. Back home, Wagner completed one year of school at a university before attending Concordia as a sophomore.

When Wagner came to Concordia last year, he joined the Cobber football team as a kicker. While a history of playing soccer and running track aids him in playing the position, Wagner also demonstrates a high level of devotion to his improvement and “practices diligently,” head coach Terry Horan said.

Wagner’s dedication to football is noted by his coaches, who view him as an important player. As kicker, he is in a leadership position with a considerable amount of “weight on his shoulders,” Horan said.  But Wagner’s record so far this season has shown his consistency and reliability.

“[Wagner] is a huge contributor to our success,” Horan said. “He is an important piece to our puzzle.”

Apart of what makes the team successful this season, aside from having Wagner as a kicker, is their positive attitude in practices and during games.  Offensive captain Brett Baune said the team gets along with one another well and that they are “the tightest group of guys” he has been apart of since coming to Concordia in 2008. Baune said Wagner has a great attitude which is reflective of the rest of their teammates.

“[Ben] is one of a kind,” Baune said. “He’s a good friend and he loves what he does here. He knows how important his role is and he doesn’t take that for granted.”

As a football player in the United States, Wagner said he has experienced a higher level of competition than that of the club teams he played on in France.  The constant motivation to improve, getting to work with his teammates and the support from fans are all things that Wagner said he loves about playing football at Concordia.

Wagner said he plans to travel home during winter and summer breaks, but eventually wants to live in the United States permanently.  Pursuing a degree in business and marketing with a minor in communications, Wagner plans to attend graduate school after graduating from Concordia.  Eventually, he would like to return to Oregon to live someday.

“The way of life [in America] is so different,” Wagner said. He also explained that when it comes to sports, people in the United States are more supportive of athletic teams and are proud to represent them.  There is a “sense of pride here that you don’t feel at all in France,” he said.

Wagner’s parents are supportive of his desire to study and live abroad.  However, his dad has one stipulation for Wagner’s future in the United States:  “He says ‘I want my grandchildren to speak French,’” Wagner said with a chuckle.