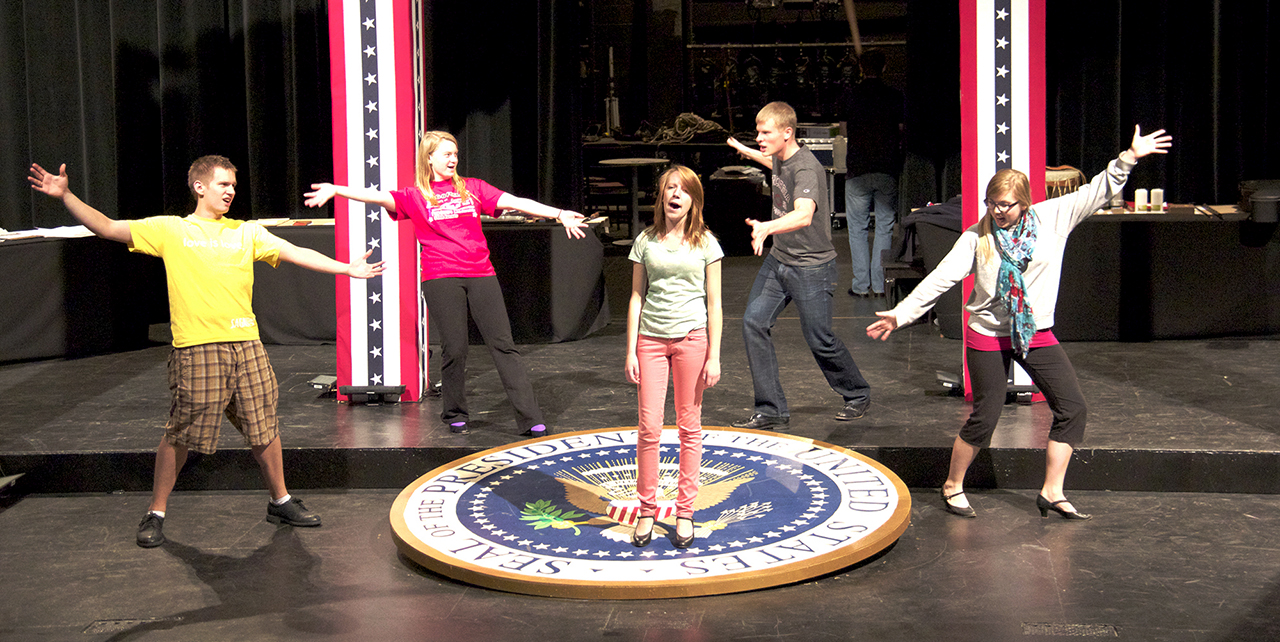 Ten students will have the opportunity to be a president this fall in Concordia College theater department’s production of “44 Plays for 44 Presidents.”

“The play…itself is quirky, it’s unusual in terms of its structure,” Wintersteen said. “It’s unlike anything I’ve ever directed.”

“44 Plays for 44 Presidents” was written by The Neo-Futurists, a group based out of Chicago that is known for their innovative style, specializing in productions exhibiting numerous fast-paced microcosm plays sewn into one cohesive piece.

“44 Plays for 44 Presidents” is about the 44 presidents of the United States, with each presidency told in a small theatrical vignette, and reduced down to the very essence of that president’s time in office, Wintersteen said. Each president is given approximately a two-minute scene, depending on what happened during their presidency.

“This is 44 basically two-minute plays,” Wintersteen said. “Each one is its own play, beginning, middle, and end, its own style.”

The play crosses several different traditional lines, with the main one being the cast. Ten cast members hold, on average, 15 roles, with that number increasing each rehearsal as scenes demand. Everyone gets a chance to fill the role of president, which is symbolized by a blue coat modeled after George Washington’s military-style coat. As the coat is passed on to the next president, a presidential button is added, leaving 44 buttons on the coat at the end of the production.
With only ten players on stage, the audience will see both males and females playing the role of the presidents. However, one scene in particular holds more meaning for two of the cast members.
Ted Coonradt and Marty Pederson, seniors at Concordia and members of the cast, are doing their Senior Theses on President William Harrison’s scene. Coonradt plays the role of President Harrison while Pederson plays the narrator.
Both feel they have come a long way since their freshman breech into college acting. Pederson says it has been a process of growth, beginning with playing smaller supporting roles, then peaking with a main character and now having it culminate in this tour-de-force production that draws upon a myriad of skills and personas.
“Take everything I’ve learned. Every kind of style, technique and this play uses them. All encompassing,” Pederson said.

Coonradt had a slightly different experience. As a first-year at Concordia, he was cast as a major supporting role in Eurydice that drew upon and pushed him as an actor. Since then he’s had the opportunity to play lots of roles, but none that hold as memorable.
In regards to “44 Plays for 44 Presidents,” however, “It’s really not a play,” said Coonradt, “It’s a plays!”
In addition to it being their combined Senior Theses, this particular scene will be filmed and compiled with 43 other scenes as a part of a nationwide festival.

“It’s like a massive international sample platter of appetizers where everything is bite-sized and everything has these extraordinary flavors,” Wintersteen said.

Over the past nine months, 44 theatrical companies have chosen to produce this play, with each company selecting one of the 44 scenes to film. Concordia is among the last this fall to put theirs on. Once the productions are complete, the individual scenes will be assembled into a final compilation representative of the entire virtual festival.

Wintersteen said this is a perfect time for this production to be put on at Concordia, with the upcoming elections this fall. Everyone has politics on the mind and this is a refreshing look at it.

“It’s about politics, but it’s not political,” Wintersteen said.

He said the play really takes a non-partisan view on what happened during each of the presidencies, dishing it out even-handedly to both parties. While it may begin to feel political towards the end of the production with the more recent presidents, the play is more satirical than anything else, encouraging us to laugh at ourselves and our politics.

Wintersteen hopes that having this production on campus will spark the community to become politically active this fall.

“We don’t care how people vote,” he said. “We think that part of the message of this play is that politics matters and what type of leaders we elect matters, and people should be thinking about that and be an active participant in our government. ”