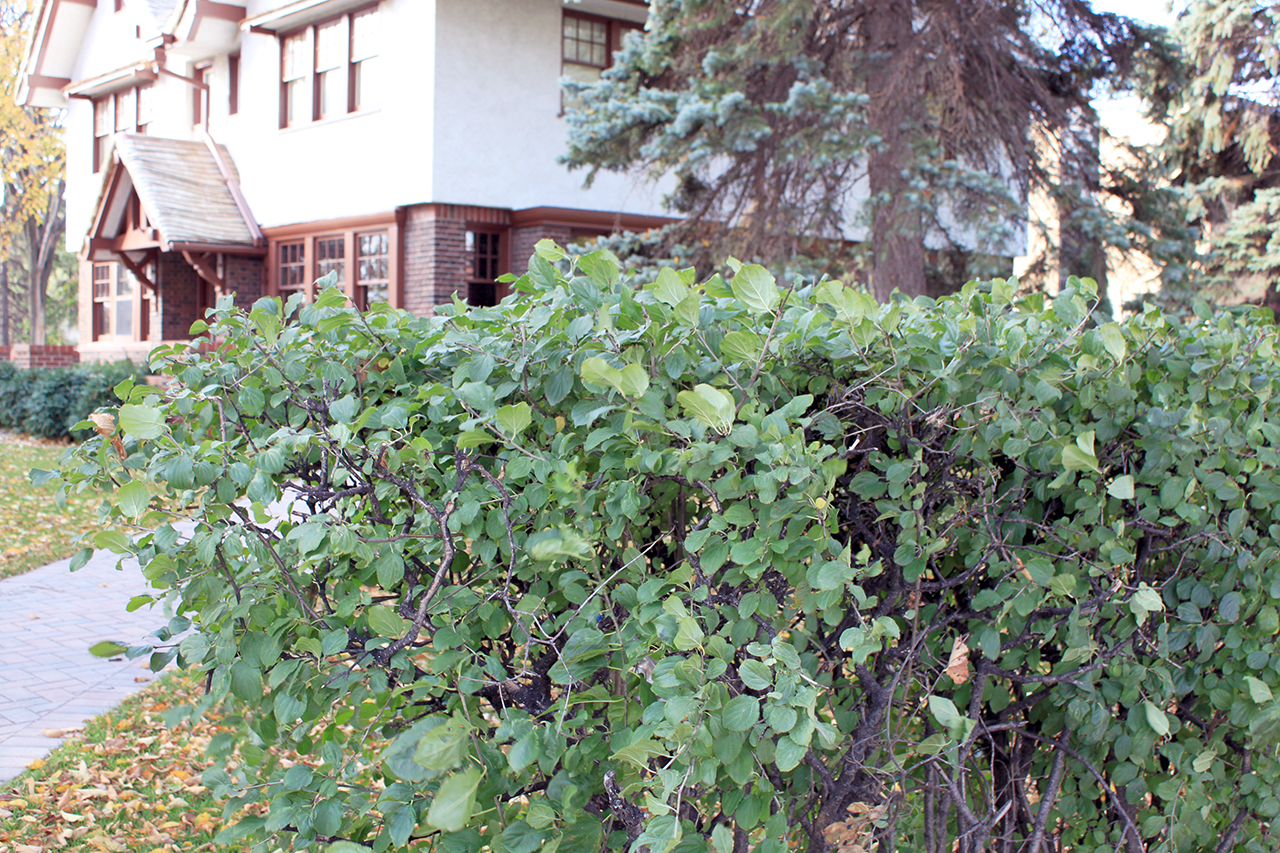 The hedge at the president’s residence is an invasive species.

Buckthorn, the plant in question, is an invasive species classified as a restricted noxious weed by the Minnesota Department of Natural Resources. This means it cannot be imported, sold or transported in Minnesota. There is no requirement to remove it from private property.

According to the DNR website, it was introduced in the mid-1800s from Europe as a popular hedge material. Since then, buckthorn has spread into natural habitats. Because it has no natural enemies, it outcompetes native plants. This can result in problems such as erosion and degradation of habitat.

When asked if he knew of the identity of the hedge at the president’s residence, President Craft responded that he did not.

It is uncertain when the hedge was planted, and this information was unavailable at Concordia’s archives. Given the hedge’s establishment, it has likely been there for some time. According to the DNR website, the nursery industry stopped selling it in the 1930s.

Despite the presence of this invasive plant, visible changes in landscaping are being implemented on other parts of Concordia’s campus. President Craft sited two reasons why this is important.

Dedication to this educational mission is a big part of Concordia’s commitment to sustainable landscaping. Ken Foster, political science professor and chair of the President’s Sustainability Council, said that every project should be linked to the educational mission of the college.

Jerry Raguse, grounds supervisor, agrees. Even though actions taken at the college may be small in the big scheme of things, he said, the impact it can potentially have on students is what is important.

“If…students can get ideas on sustainability and develop those habits and take them with them it can be more far reaching,” he said.

Raguse said that the idea of integrating visual examples of sustainability with educational goals is an idea President Craft has recently brought it to the forefront.

For the college, the desire to include student voices when it comes to campus projects is as strong as the commitment to the sustainability mission.

“The role of the student is utterly and absolutely essential,” said Kristin Brethova, sustainability coordinator. “If it’s not something that intersects with student interest and doesn’t engage students, it’s not going to be successful.”

Foster thinks so, too, saying that the administration wants to know what students think. He would like to see students explore ideas they have about making the campus both more sustainable and more comfortable.

“Do students have ideas about how the outside of the campus could be enhanced?” Foster asked.

Michelle Marko, biology professor and chair of the Water and Landscaping Working Group, said that her group is looking for student involvement.

Marko discussed the importance of sustainable landscaping from a biological perspective.

“We live in a semi-arid region,” she said. This means that drier conditions are not unusual. She explained that part of the region around Concordia is former wetland and it used to hold water, but now it all primarily runs off into the Red River, adding a layer of pollution. This has downstream implications.

Marko’s limnology class took a recent trip to Lake Winnipeg, which is experiencing increased algae bloom. This, she said, is in part due to increased nutrients in the water caused by fertilizer run-off. Some of which is coming from our area.

“[W]e need to make sure that we’re considering the impact that those additional nutrients can have and just be responsible citizens,” Marko said. “What we’re doing at Concordia has downstream effects.”

Native plantings are a way to reduce these effects, she said. Prairie plants have extensive root systems, and most of the plant matter is actually below ground. This characteristic promotes drought tolerance, prevents erosion and also holds water in the ground a little longer. She also highlighted that they are both beautiful and functional.

“I’d very much like to promote the environmental fixes that work with the community,” she said.

Foster wants people to walk around campus and see that sustainable practices and native plantings can look good. He also thinks the campus should remind people that they are part of a habitat. Foster recognized that it is impractical to have native plantings absolutely everywhere, but said we need to “strike a balance.”

This is just what Raguse is attempting to do.

“We try to use native plant material to kind of get a balance of a formal landscape along with the native landscape,” he said.

Each year Raguse focuses on one new area of the campus to renovate. This year he would like to work on the west side of the pool, and part of the plan will include some native plantings.

Concordia is clearly thinking about sustainable landscaping, but what does that mean for the buckthorn hedge?

Raguse said that they will replace it in the future with something suitable for this region. But this project, like all others, is contingent upon funding. As buckthorn has only recently come to the forefront as a landscaping issue, it has not yet made it to the high priority list.