The appeal of the sweater 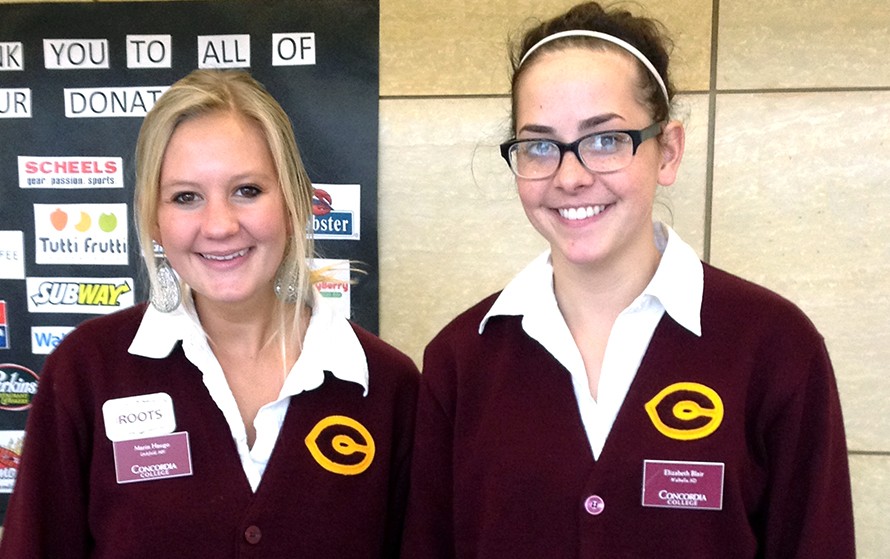 One week a year. They come out of hiding on Sunday evening and make their way around campus until the following Sunday afternoon.

The maroon button-up sweaters have been worn by Concordia’s Homecoming Committee since 1989. With a break from them in 1991 to honor the school’s centennial, they returned in 1992 and have been around ever since.

Searle Swedlund, Homecoming Committee advisor and Concordia alumnus, said that he was always on Family Weekend Committee when he was here.

“We were always jealous of the Homecoming Committee [and their sweaters],” Swedlund said. “It’s the iconic image [of the committee].”

While family weekend also had their own matching sweaters and bow ties, Swedlund said there was just always something special about homecoming.

Steph Smith, a Concordia alumus and member of the 1989 Homecoming Committee, said that fall they “decided to go for the more traditional collegiate-looking sweater…and had the last-minute idea of putting the ‘c’ on it.”

Prior to the coordinating sweaters in 1989, the committee picked out a sweater to purchase and wear throughout the week to match one another. In 1989, the homecoming sweater as it is known today was chosen, and has been worn every year since, with the exception of 1991, when Norwegian sweaters were selected to honor Concordia’s centennial year.

“We had no idea of the long-lasting effect that the sweaters would have or the tradition they have become in and of themselves,” Smith said. “I still have mine.”

The sweaters are handed out on Sunday evening, the week of homecoming. The committee wears the sweaters to various events throughout the week, traditionally with black pants or jeans, depending on the event, Swedlund said.

This year there will be an addition to the male’s outfits. Matt Dymoke, junior Homecoming Committee member, selected bowties for all of the men to wear along with their sweaters.

“I thought it would be fun,” Dymoke said. There are few male members in the committee this year, and Dymoke said he thought this would be a great way of bonding.

“Homecoming is a lot of work,” Lohse said, and these sweaters are somewhat of a reward for all of their work.

Swedlund said he was surprised to hear about the appeal of the sweaters, but agreed that it recognizes the members’ hard work.

“Students [on the committee] go above and beyond, more than I would ever ask them to do,” Swedlund said. He attributed this to the wide group of people that homecoming involves, and that students see themselves in the alumni that are committed to returning to the Concordia community.

“Respect your elders,” Swedlund said. “It’s of that notion.”

Last year, a new tradition was started for members that had been on the committee for three years. Kayla Trobec ’12 was the first one to have been on the committee for three years, and was allowed to keep her sweater at the end of homecoming week. Swedlund said that although the sweaters are expensive, they hope to continue this tradition, which means this year’s homecoming chair, Nicole Lindor, will get to keep hers.

While the sweaters reside the other 51 weeks of the year in the attic of the Office of Alumni Relations collecting their musty smell, the Homecoming Committee members still wear them proud.